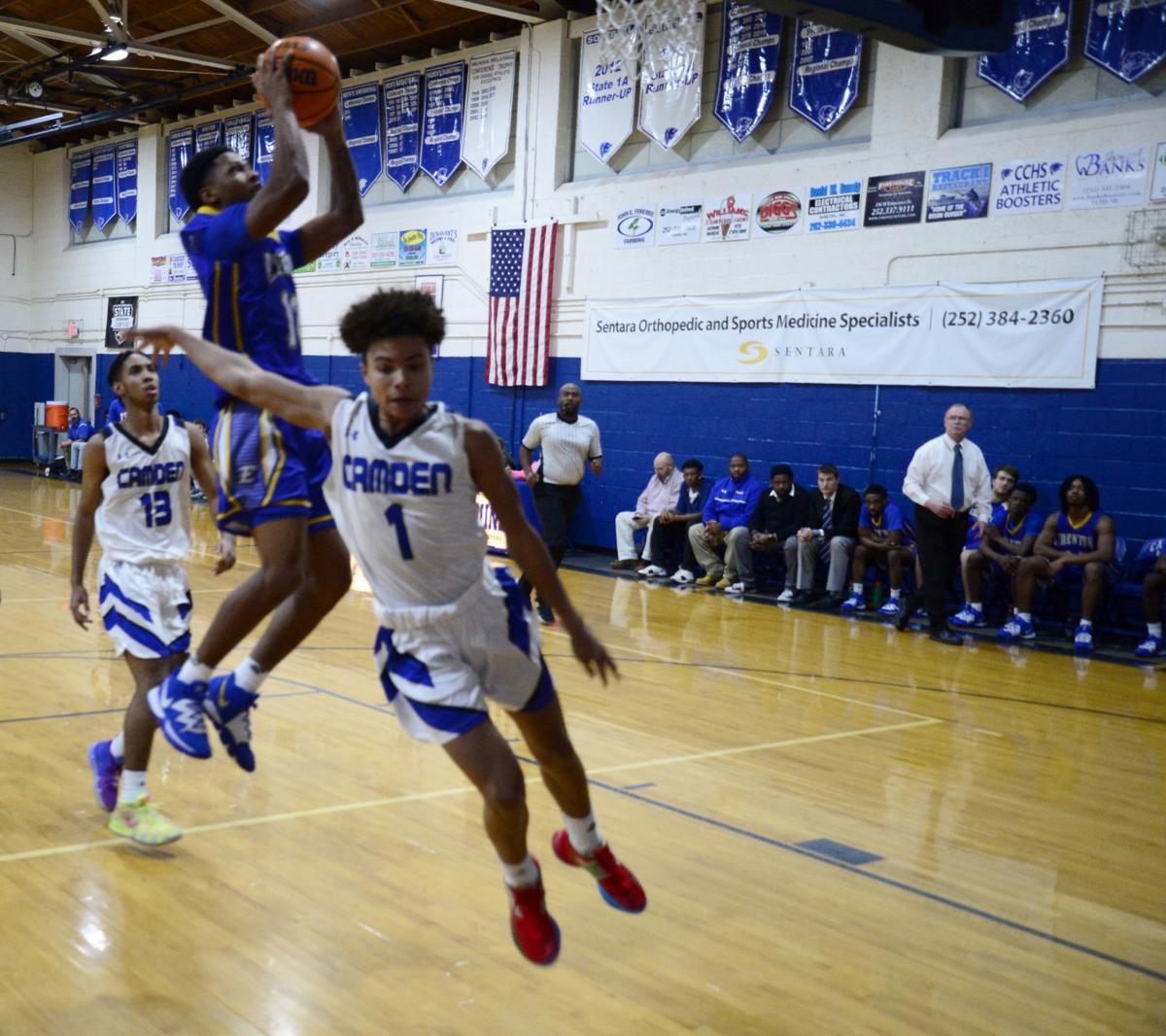 John A. Holmes’ Mitjonta Stanley shoots the ball as Camden’s Andre Barnett runs by him during a boys’ basketball game at Camden County High School, Tuesday. 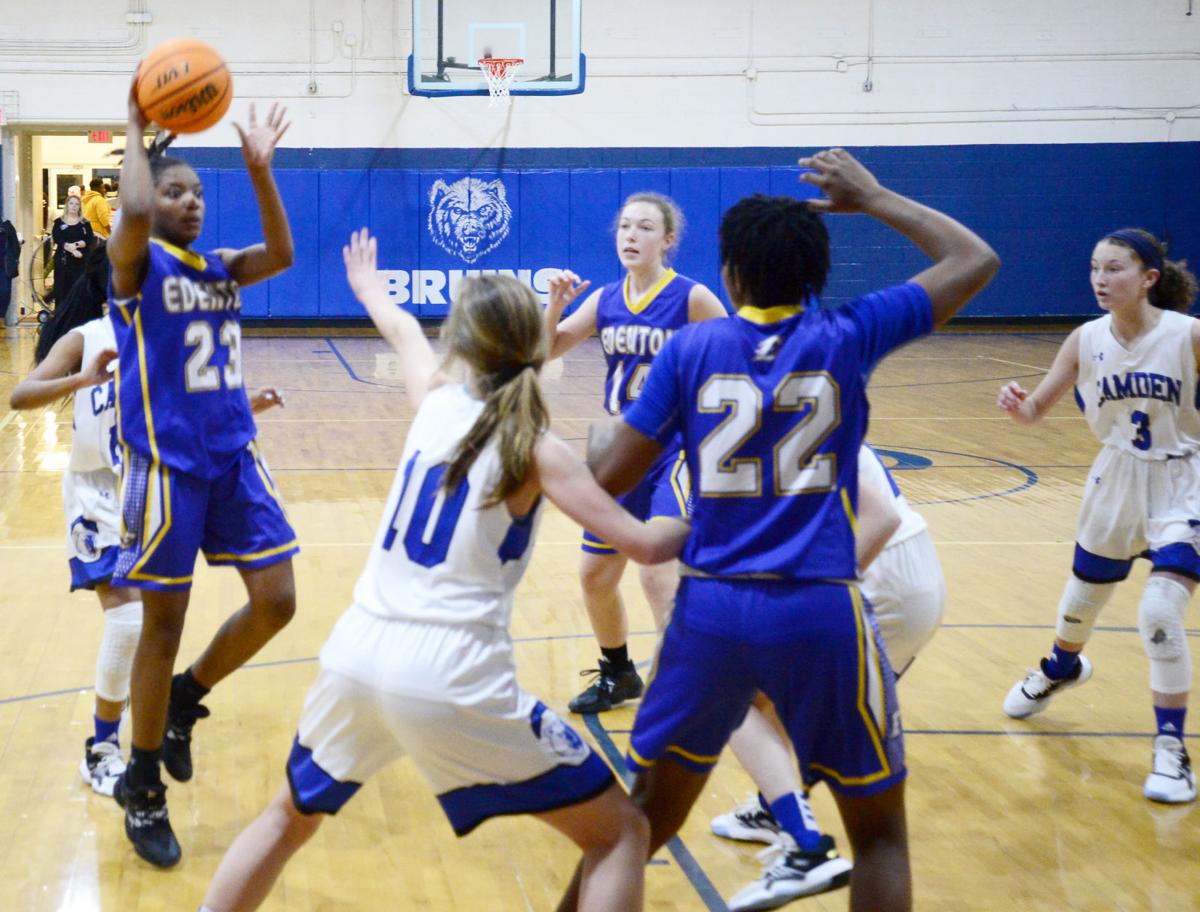 John A. Holmes’ Mitjonta Stanley shoots the ball as Camden’s Andre Barnett runs by him during a boys’ basketball game at Camden County High School, Tuesday.

CAMDEN — It was a tale of two halves Tuesday night in the boys’ basketball game between the Camden Bruins and John A. Holmes Aces.

It was a back-and-forth first half that ended in a tie, but the second half was all Aces.

John A. Holmes outscored the Bruins 45-18 in the final 16 minutes on the way to a 71-44 victory in its first conference game of the season.

“Our defensive intensity to start the third quarter was the difference in the game,” John A. Holmes head coach Robert Woodley said.

Neither team was able to break the 26-26 tie for nearly two minutes into the second half until senior Mitjonta Stanley provided a spark for the Aces (12-0, 1-0 Albemarle Athletic Conference).

Stanley stole the ball on the defensive end of the court and ran down for a layup to make it 28-26 with 6:05 left in the third quarter.

He rushed down the court again moments later after Camden (9-5, 0-2 AAC) missed a shot for another layup and followed that with another steal and fastbreak layup.

“(Stanley) once again jumpstarted us by getting some steals on the backside of the defense,” Woodley said.

Stanley finished with seven steals and 10 points in the game. Every one of his points came in the second half.

A triple from Camden sophomore Andre Barnett, who finished with 12 points on four made 3-pointers, ended the 12-0 run, but it only got worse for the Bruins.

Camden committed 11 turnovers in the second half, totalling 20 for the game, and made six 3-pointers for all of its made field goals of the half. Made 3-pointers accounted for 36 of the Bruins’ points on Tuesday.

After a slow start for the Edenton offense in the first half, the Aces clicked throughout the second half as their largest lead of the third quarter was 46-29.

The game’s final score of 71-44 was their largest lead of the game as they spent most of the fourth quarter up by at least 20 over the Bruins.

For the entirety of the first half, however, it looked like Camden would have a decent shot at beating the Aces for the first time in three years of being conference opponents.

Barnett scored the game’s first basket with a 3-pointer 2:29 into the game and the teams traded leads three more times in the opening quarter with Edenton leading 10-9 after eight minutes.

A 7-0 run capped off by a banked-in triple from senior Reid Roberson gave Camden a 19-14 lead with 3:40 left in the first half.

With the Bruins leading 26-24 with 15 seconds until halftime, Edenton junior Kendrick Armstead hit a jumper to even the score and send the teams to the locker rooms tied.

Camden’s first 12 points all came from beyond the 3-point line.

Senior forward Keimonte Raynor, who led the Aces with 25 points, carried the John A. Holmes offense in the first half with 16 points. Aside from two made free throws, the rest of his first-half points came down low.

Keenan Downing followed Raynor with 13 points all coming in the second half.

Raynor came down with 11 rebounds for a double-double on the night and senior Bobby Wilson added 10 boards helping Edenton outrebound Camden 52-25.Tim Aydlett, a senior guard for Camden, led the Bruins with 16 points in their loss.

“We got an opportunity to be good. In spots, we look very good, but we haven’t put a whole game together in a long time,” Harnly said.

John A. Holmes 50, Camden 37: After a slow start for the Edenton girls, a strong second quarter propelled them to a 10-point halftime lead.

The Lady Aces (9-4, 1-0 AAC) trailed by five after one quarter with just eight points on the board, but they flipped the script with a 17-2 second quarter.

Edenton took the lead for good after two made free throws from junior Jamillian Johnson made it 14-13 Lady Aces with 4:30 until halftime.

It was the middle of an 11-0 run for John A. Holmes that made it 19-13 with the next five points coming from sophomore Le’Asia Stanley, who finished with a game-high 20 points and 25 rebounds to go along with three assists, three steals and three blocks.

“We started slow and ended slow, but in the middle we played a whole lot better,” John A. Holmes head coach Brian Chappell said, pointing to how young the team is with just two upperclassmen.

The Lady Bruins had taken their largest lead of the game at 13-6 on a junior Taniya Swinson bucket late in the first quarter and proceeded to go cold missing their next 20 field goals until Swinson made it 28-17 two minutes into the second half.

Williams then made a shot on Camden’s next possession to make it 28-19, but Edenton was able to keep its distance from the Lady Bruins closing the third quarter on a 7-2 run for a 35-21 lead.

Camden found better success in the fourth quarter scoring 16 points with seven points from sophomore Kennedy Lighty, who finished with nine points, and two 3-pointers from Hailey Bunting, who led the home team with 12 points on four triples in the game.

But the Lady Aces never let Camden get closer than eight points behind as Johnson scored seven of her 11 total points in the fourth quarter. She added eight rebounds, five steals and three assists.

The Lady Bruins used an 8-0 run to go up 13-6 in the first quarter before struggling and Camden coach Rick Heckler noted it’s not the first time they had a good start go to waste.

“We’ve done that the last three games. In the second quarter, we just go kaput. We just have to get over it because it’s a close game without that,” Heckler said.