Northeastern High School will host a sendoff event today at 10 a.m. for the Eagles football team that will play for the North Carolina High School Athletic Association’s 2A state championship at Wake Forest University’s BB&T Field in Winston-Salem on Saturday. The ceremony will begin in front of the high school. Supporters are encouraged to line both sides of the street in front of the school. 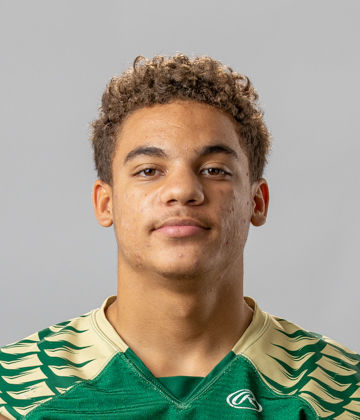 The quarterback position is one of the most analyzed positions in all of sports.

The Northeastern football team began the season with Deandre Proctor as the starting quarterback.

When the junior went down with an injury Oct. 11 against Hertford County, Holden Hodge moved from wide receiver to starting quarterback.

Both have played key roles this season and are expected to guide the Northeastern offense in the North Carolina High School Athletic Association 2A state championship game Saturday at Wake Forest University’s BB&T Field in Winston-Salem.

In the regular-season contest against Hertford County, the Eagles appeared to be heading to a victory against the rival Bears.

Then Proctor sustained the injury.

He said at the time of the injury, he was in shock.

NHS was leading Hertford County and the team was playing so well.

“I wanted to come back so bad, but I couldn’t,” Proctor said.

After the injury to Proctor, Hertford County rallied to defeat Northeastern 33-21.

The upper-body injury kept Proctor away from game action for over a month.

Proctor returned to action against SouthWest Edgecombe in the third round of the NCHSAA state playoffs Nov. 22.

Proctor, listed at 6-foot and 165 pounds credits former Northeastern quarterback Aaron Harris for being a mentor to him in terms of how to deal with the responsibility and pressure that comes with being the starting quarterback.

“He was a good leader,” Proctor said of Harris.

Harris, who was named Northeastern’s offensive player of the game in last season’s 2A championship game against Reidsville, is now a member of the North Carolina A&T State University football team.

Proctor said that Harris stressed to him the importance of mental toughness.

When Hodge was informed after the Hertford County game that he would play quarterback, he felt that he could play the position and he knew he had to step up.

Hodge started his first game at quarterback against Currituck Oct. 18 on the road and helped the Eagles secure a 14-7 win.

The win at Currituck propelled the Eagles to earn a share of the Northeastern Coastal Conference championship with Currituck and Hertford County.

Hodge said that he takes pride in playing multiple positions on the team.

This season, Hodge, listed at 5-foot-6, 155 pounds, has played quarterback, defensive back, wide receiver, running back and is also on special teams as a holder and covers punts.

His versatility has caught the attention of college football programs.

“All I really want is to play four more years,” Hodge said. “I love the game.”

Proctor, who goes by the nickname “Biggie” was proud of how the team played when he was out of the lineup.

When he returned to game action in the state playoff game, Proctor acknowledged that he was nervous.

All Proctor wanted was to continue the positive momentum on offense.

Proctor noted that there isn’t a competition and both players want to help the team win.

Proctor acknowledged that it’s a good feeling that he will the chance to play in a state championship game.

Hodge played a big role in last season’s state championship game as he intercepted a pass on defense.

Hodge acknowledged that last season’s game is motivation for the Eagles.

Hodge, who came to North Carolina from Texas in 2017, acknowledge that he never thought he would be a key member on a state championship caliber team, but last season changed his perspective.

“Play hard, minimize the mistakes and get the win,” he said.

Northeastern High School will send off the football team to Winston-Salem Friday at 10 a.m.

The team buses will then go east on Ehringhaus Street, then north on Road Street, then to west on Elizabeth Street and head north on Hughes Blvd.