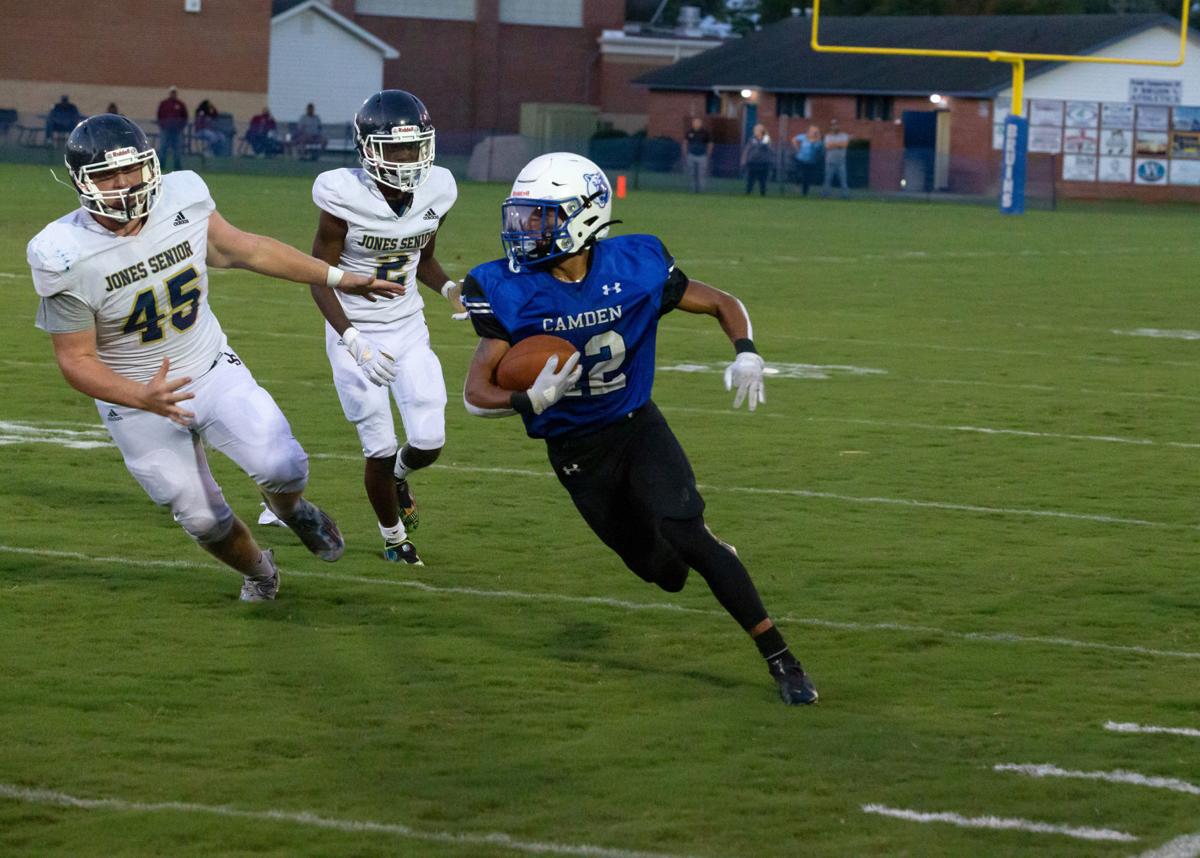 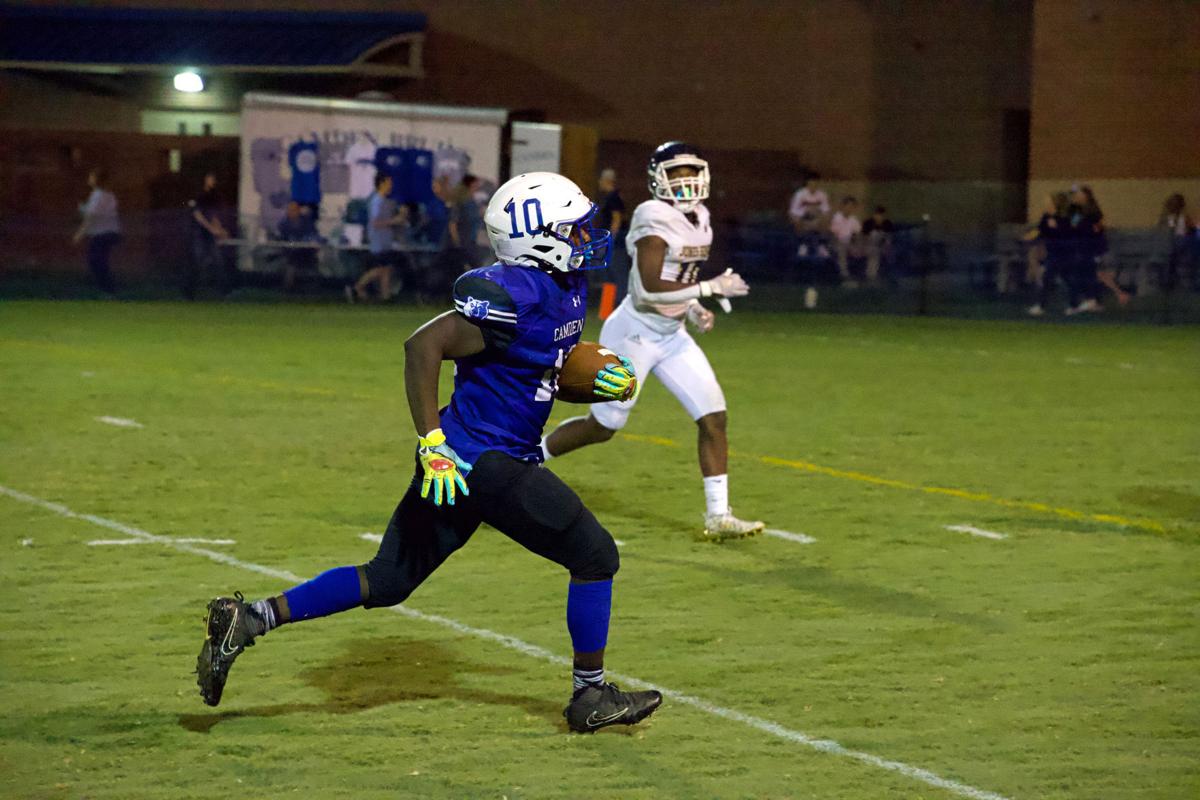 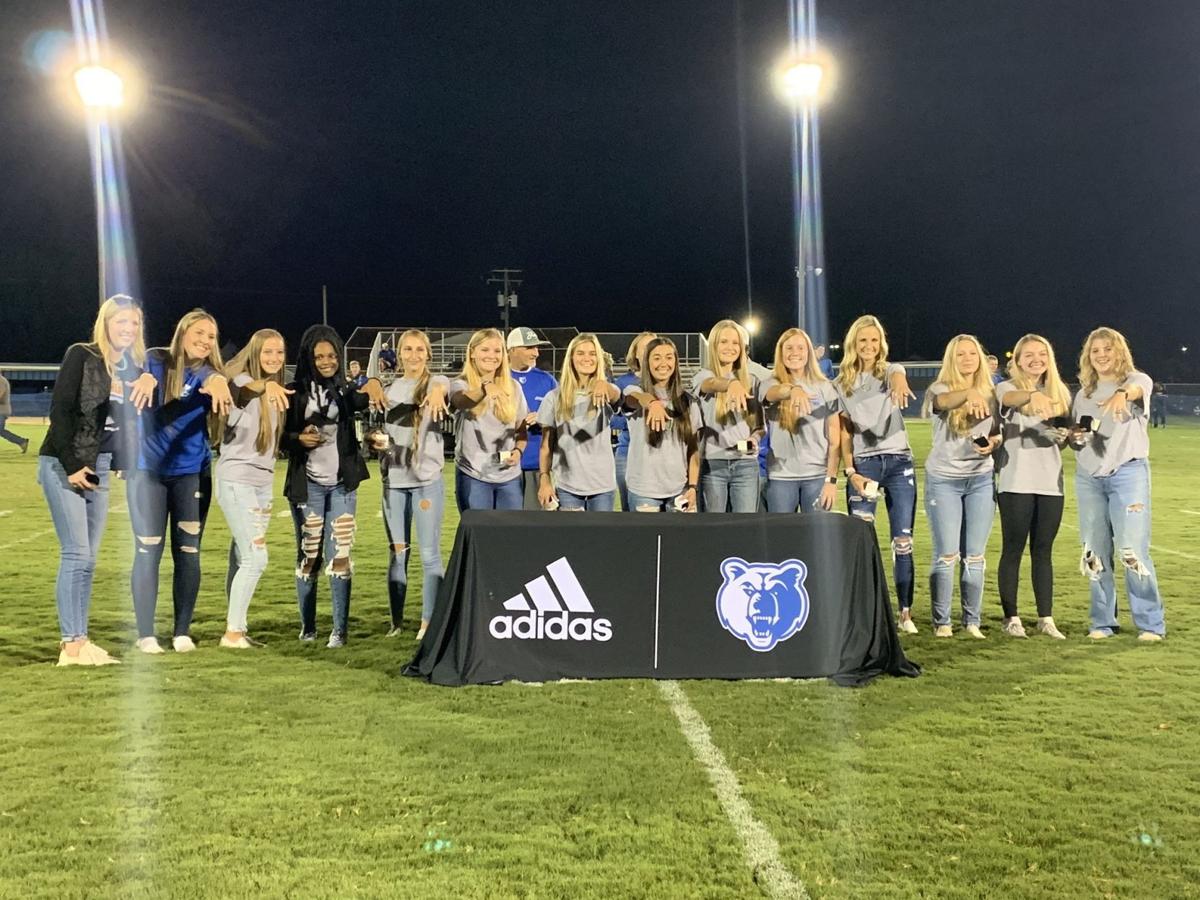 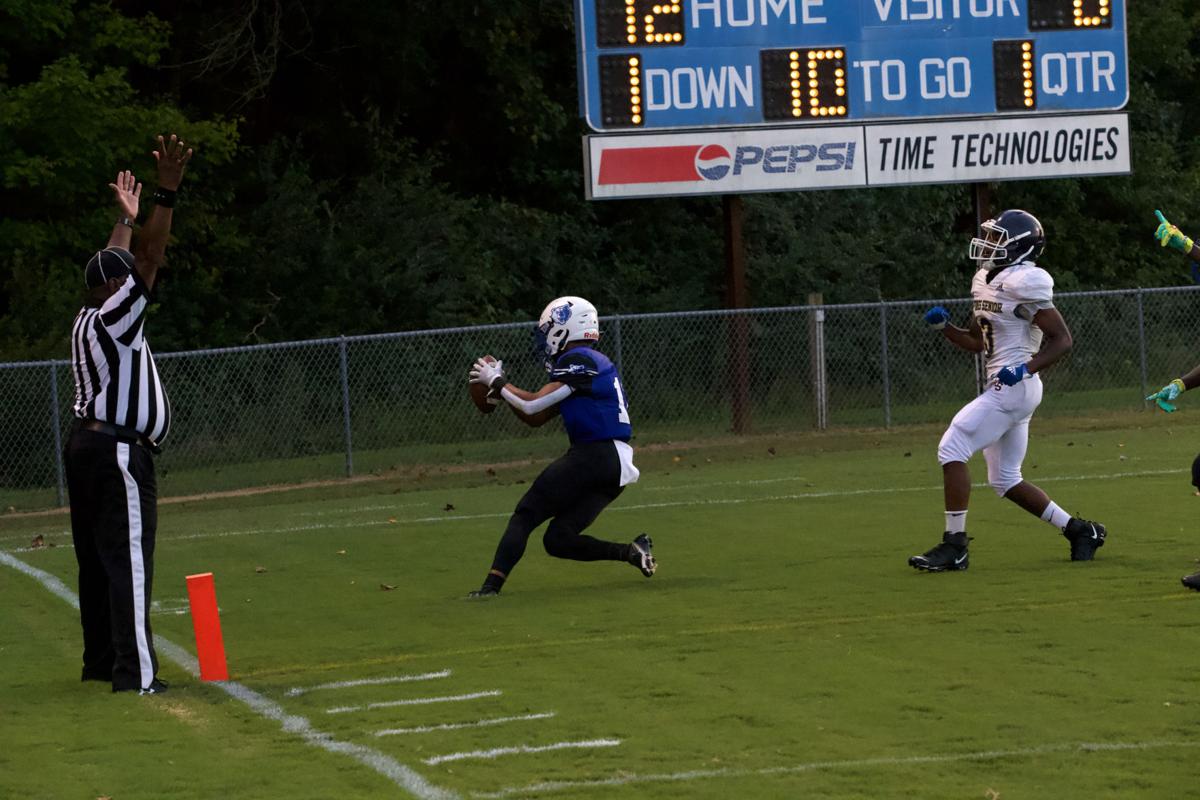 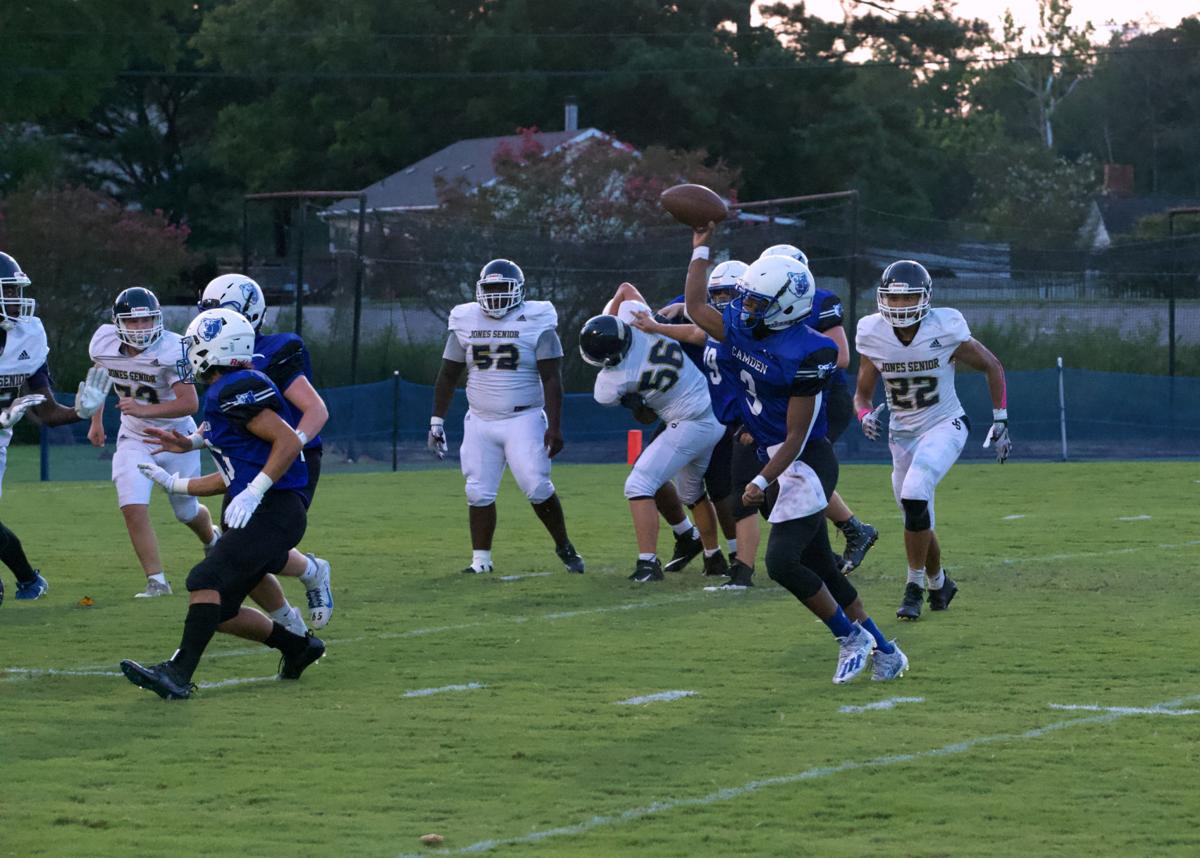 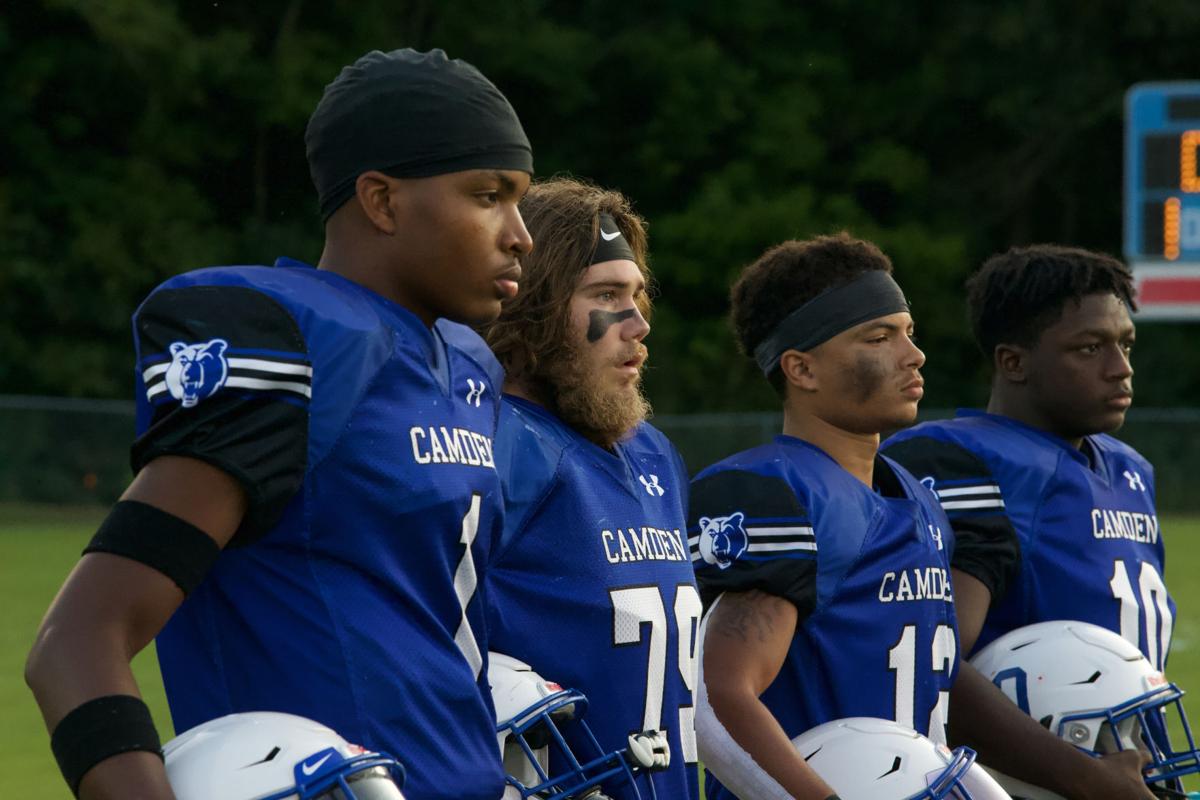 CAMDEN — Strike up the band, let the drums roll, and the trumpets roar!

It was a celebratory atmosphere Friday night in Camden County as the Bruins posted their first victory by the score of 42-0 over Jones Senior High School of Trenton, N.C.

The home blue and white dominated from the first whistle, accumulating almost 500 yards in total offense while holding their opponent scoreless.

A large crowd was on hand, and not just for the football. The Camden County softball team was presented with their hard earned state championship rings. The Bruins won the title earlier this year, the first sports state championship of any kind won by the school.

And, to punctuate the successful evening, the Bruin marching band, known by their followers as “The Blue Machine”, played throughout, unveiling their new presentation to culminate the halftime festivities.

Camden (1-2) took the opening kickoff right down for an opening score.

Starting at their own 35 yard line, Jaden Clark carried the ball four times in the drive, the last a pitch sweep that he cut back for a 19 yard gain, and a first down at the Jones 20 yard line. On the next play, quarterback J’ron Pendleton rolled out and passed to Devin Bell who ran the ball down to the three yard line. Bell then took a quick handoff up the middle for the score. The Bruins led 6-0 at the 7:52 mark of the first quarter.

Camden would hold Jones (0-3) to three plays and out deep in their own territory. A short punt set up the Bruins at the Trojans 32 yard line. Pendleton dropped back to pass, eluded the rush, and then scrambled all the way for a touchdown. The speedy sophomore then passed to Andre Barnett for the two point conversion and a 14-0 lead.

Three incomplete passes would again quickly return the ball to the Bruins. The offense faltered with a holding penalty, and a false start. However, with a second down and long from the Camden 49 yard line, Pendleton connected with Barnett with a short pass in the right flat.

The senior wide receiver reversed his field, picked up his blockers, and went all the way to the two yard line where he was knocked out bounds. Pendleton then kept the ball for his second touchdown. The kick by Jacori Sutton was good and the score moved to 21-0.

The Trojans would finally get their first first down on the running of quarterback Evan Andrews as the first quarter was ending. The drive did not continue, and Jones would again punt back to the Bruins. Camden kept the ball for a clock-eating ten plays. This time Pendleton would pass to Isaiah Hill for a 17 yard score in the right corner of the end zone. The fourth down play, and successful kick pushed the Camden lead to 28-0.

“Our offense has been pretty consistent so far this year,” said Camden coach Josh Sophia. “I’m happy with the improvement we showed on defense. We made some changes this week, moved some guys around, and played well throughout the game. The win is good for our confidence going in to the game with Pasquotank next week.”

The Bruins would score twice more in the second half for the final margin. Bell would get his second score on a 25 yard bolt up the middle. Then, just before the end of the third quarter, Pendleton would connect again with Barnett for a 60 yard touchdown.

Pendleton would finish the night with 9-of-15 passing for 216 yards, and two passing scores to go with his two rushing touchdowns. The Bruins would amass 257 rushing yards with Clark the workhorse with 111 yards on 16 attempts.

Jayce McFadden followed with 61 yards, and the Bell with 57 on nine carries.