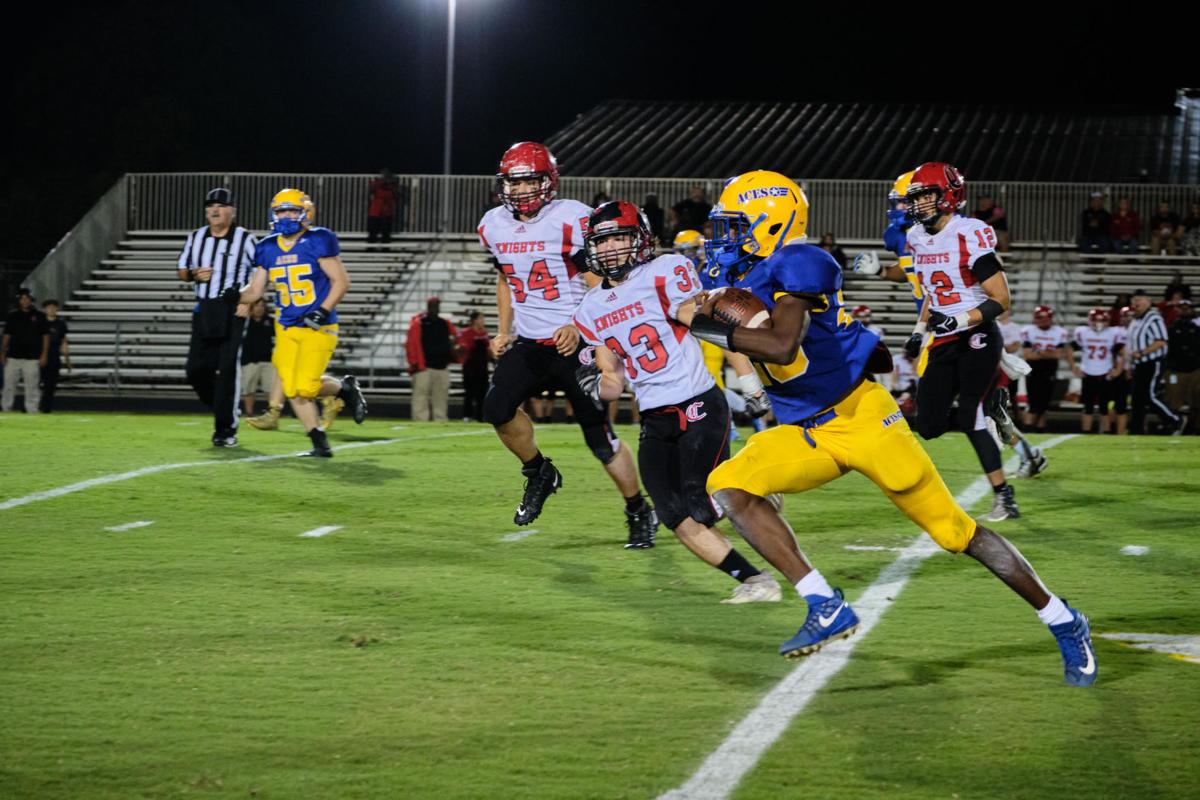 John A. Holmes running back Malachi White (with ball) scats to the end zone for six points. 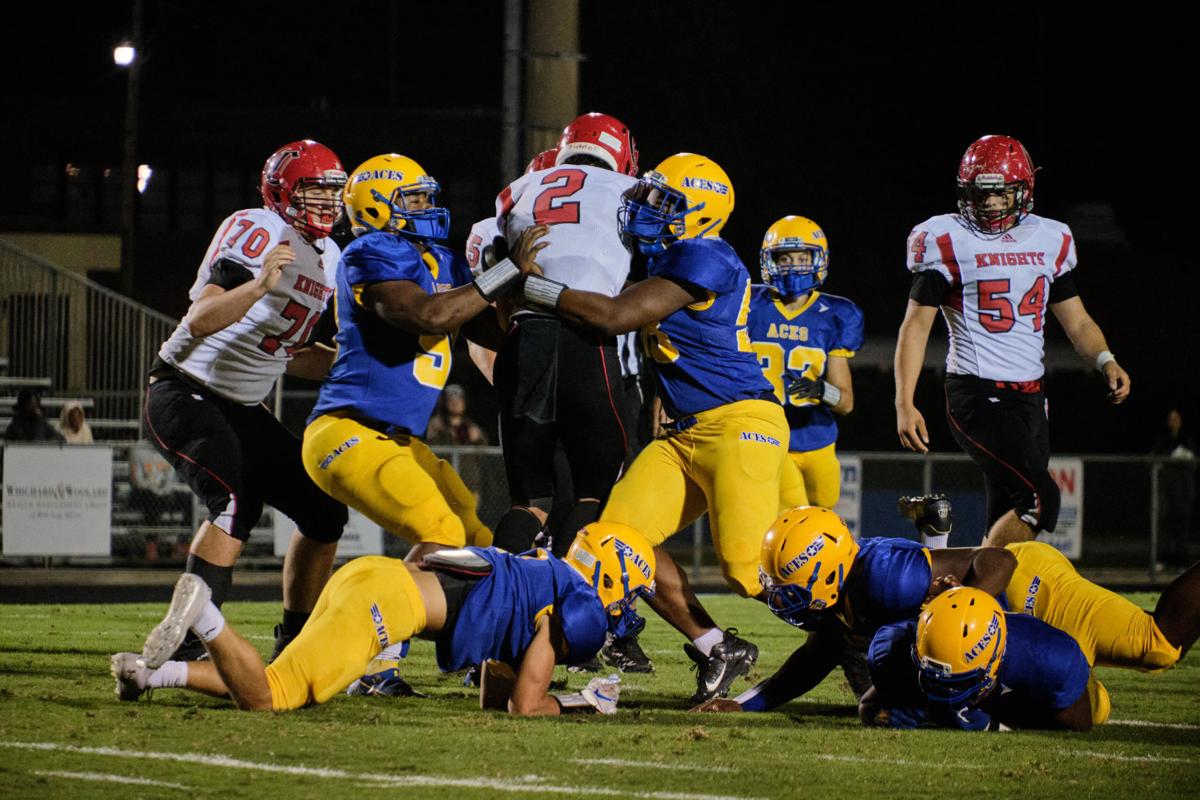 A pair of Aces’ defenders trump the scrambling of Currituck quarterback Makegan Piorkowski (No. 2). 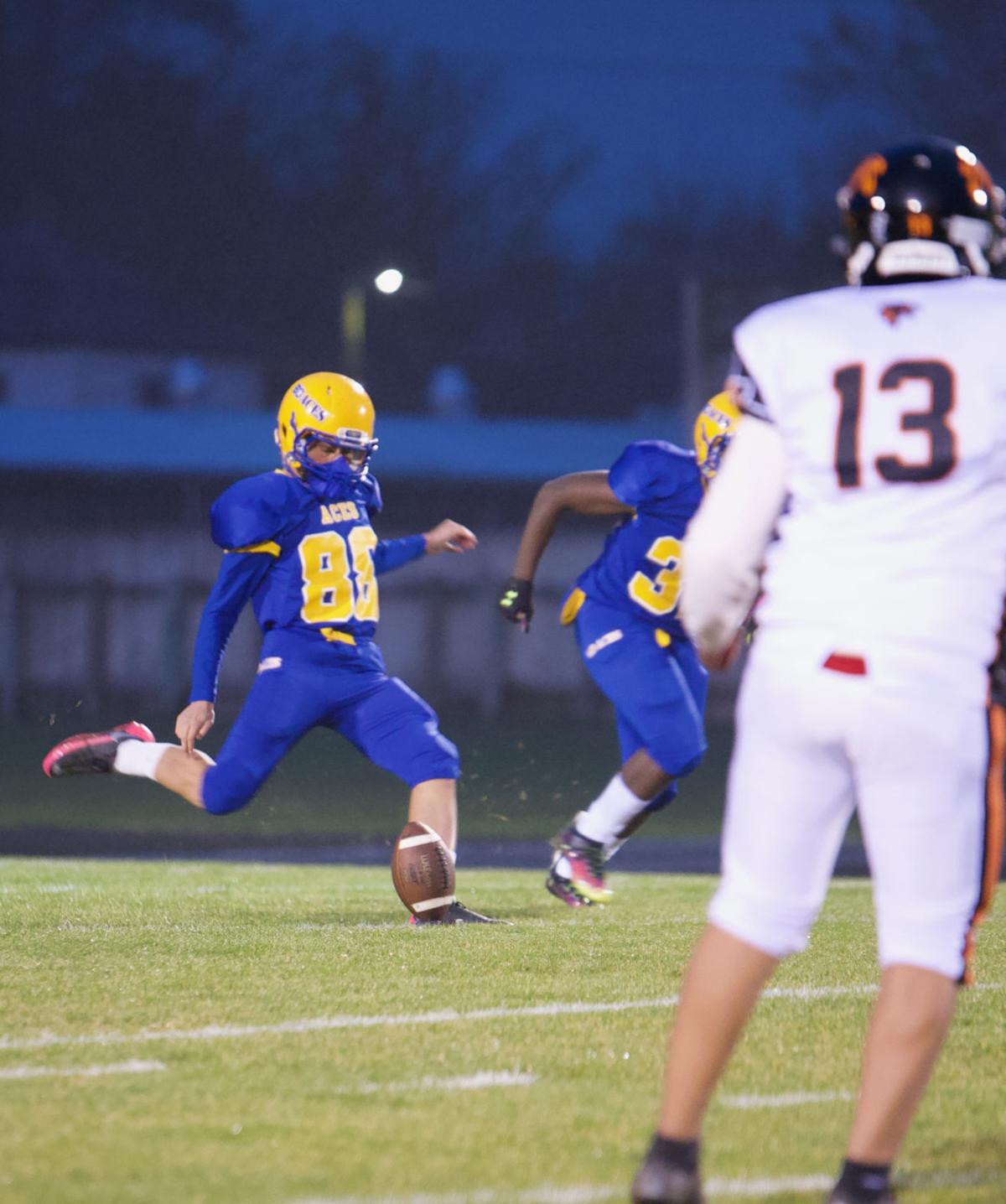 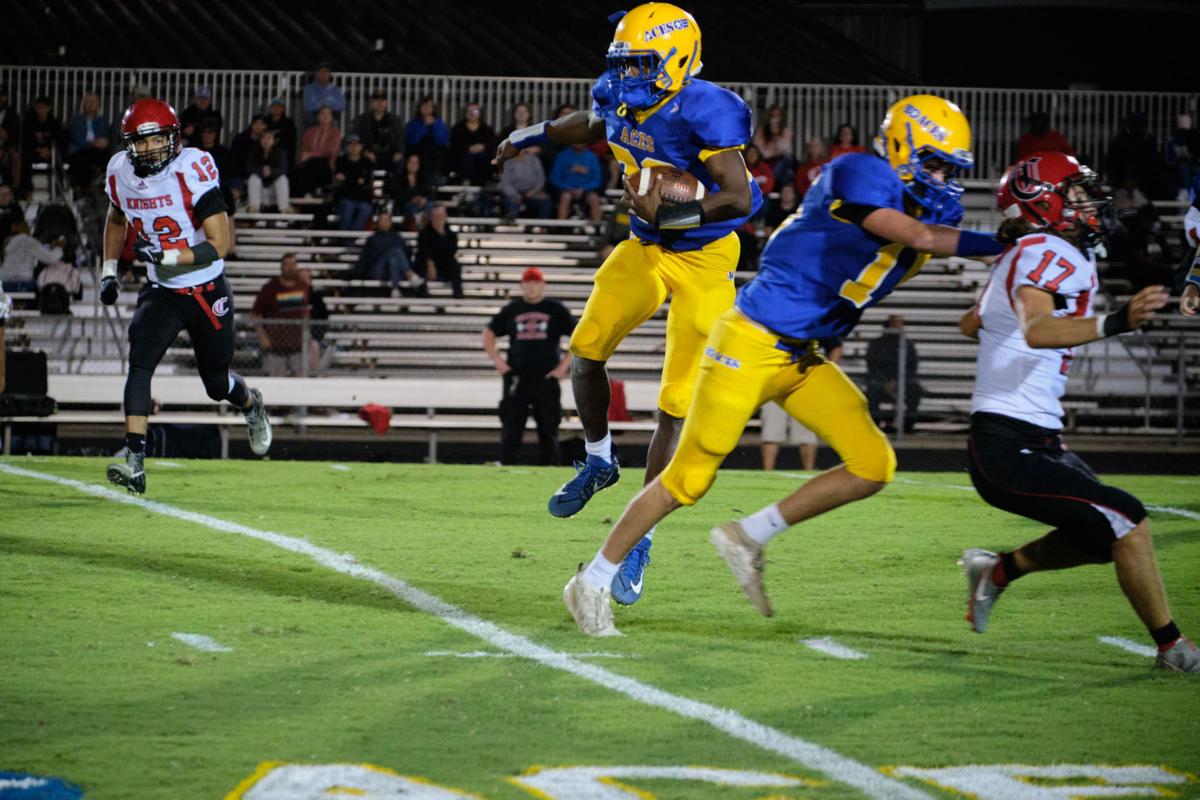 Malachi White (No. 20) cuts around the block executed by teammate Jimbo Parrish, that freed him up for a big touchdown run.

John A. Holmes running back Malachi White (with ball) scats to the end zone for six points.

A pair of Aces’ defenders trump the scrambling of Currituck quarterback Makegan Piorkowski (No. 2).

Malachi White (No. 20) cuts around the block executed by teammate Jimbo Parrish, that freed him up for a big touchdown run.

EDENTON — It was a game to remember for the John A. Holmes High School varsity football team.

The Aces, a Class 2A program, pulled away from the Class 3A Knights late in the first half and in the final two quarters to secure a 91-50 victory.

The contest will rank high in multiple record books.

Friday’s game tied the Fuquay-Varina vs. Southern Durham game that was played on Sept. 29, 1995.

It is believed that the Aces’ 91 points set a new record for points scored for a varsity high school team in Edenton.

According to a statistician who provided WTIB-FM the information during the radio audio broadcast of the game, Edenton is believed to have scored 84 points in a game in the 1930s.

The 13 made point-after-touchdown kicks tied an NCHSAA record for most PAT kicks made in a game.

In the 1990 season, Forest Hills’ Jay Sutton made 13 extra point attempts in a game against North Stanly in a Forest Hills 91-6 win.

The Aces and Knights total yards surpassed the then No. 3 game between Northeastern and D.H. Conley, which had 1,349 yards in an Aug. 17, 2017 game by one yard.

Holmes surpassed Northeastern’s 778 yards (571 rushing, 207 passing) of total offense in a game against D.H. Conley on Aug. 17, 2017 to secure a tie for fifth all-time with South Columbus by one yard.

Holmes’ team total offensive yards surpassed its previous best of 557 yards in a game against Hertford County on Oct. 10, 2016. The 2016 game for the Aces was the No. 40th all time in NCHSAA history.

“I’ve never been part of a game in my career that had that many points scored in it,” Holmes head coach Paul Hoggard said in a telephone interview after the game Saturday.

Hoggard joked Friday’s game was like a tennis match.

The Aces coach noted the key moment of the game occurred late in the second quarter when the Holmes defense stopped the Currituck offense and was able to extend their lead by two touchdowns at halftime.

Hoggard also added that key to Holmes’ success was that its first-team offense did not turn the football over with a fumble or an interception.

The coach noted execution on snaps and handoffs were better Friday than in previous games this season.

Although Holmes scored 91 points, Hoggard noted it was bittersweet because the Aces gave up 50 points in the game.

Hoggard said the Aces had multiple players that played on offense and defense in the game against the Knights.

Hoggard credited Currituck County for being a very good football team that had good schemes against the Holmes defense.

Hoggard believes the mistakes that were exposed by Currituck’s offense against the Holmes defense are fixable.

Currituck received the opening kickoff and converted a time-consuming drive with a Ryan Fisher touchdown run to take a 7-0 lead.

On the Aces’ first offensive drive, Holmes senior running back Malachi White broke a run over 50 yards to the Currituck 28-yard line.

White ended the drive with a 28-yard touchdown run.

Perez added the point-after-touchdown run to tie the game at 7-7.

White added his second touchdown on an over 65-yard touchdown run to give the Aces a 14-7 lead.

The Currituck special teams converted a fourth down. That led to a Currituck touchdown run by quarterback Makegan Piorkowski late in the first quarter to tie the game 14-14

The Aces struck immediately as senior quarterback Landen Hoggard connected with Alex Bergevin for an over 60-yard touchdown pass to give Holmes a 21-14 lead.

The Knights had success running the ball with Fisher.

Currituck ended the drive with a touchdown to tie the game 21-21 early in the second quarter on a Piorkowski run over 15 yards.

White appeared to break another run for a touchdown, but the Aces were called for holding penalty to nullify the touchdown.

Currituck continued its success running the football with Fisher at running back.

On third down, Currituck’s Piorkowski connected with Damon Duke for an over 50-yard touchdown pass to tie the game 28-28.

A Landen Hoggard run set up the Aces inside Currituck territory.

Twine ended the drive on a Twine 28-yard touchdown run with less than six minutes remaining in the second quarter to give the Aces a 35-28 lead.

In Holmes territory, Currituck went for it on fourth-and-14. Piorkowski connected with a wide receiver at the Holmes 4-yard line for a first-and-goal.

Piorkowski scored his third rushing touchdown of the half with less than 2:10 remaining in the second quarter to tie the game 35-35.

White then scored on an over 75-yard touchdown run to give the Aces a 42-35 lead.

The Aces defense stopped the Currituck offense and forced Currituck to punt the ball with 1:10 remaining in the second quarter.

Holmes got the ball at its own 49-yard line with one minute remaining in the second quarter.

On second-and-goal, Holmes’ Twine scored a touchdown, but the score was nullified on a Holmes holding penalty.

Twine appeared to score another touchdown, but the Aces were called for another penalty, which moved the ball to the Holmes’ 21-yard line.

Landen Hoggard connected with Ireal Hills for an over 20-yard touchdown pass to take a 49-35 lead with less than 30 seconds remaining in the second quarter.

White scored on an over 45-yard touchdown run to help increase the Aces lead to 56-35 early in the third quarter.

An Eric Newman touchdown run capped a short drive for the Knights. Currituck cut the deficit to 56-42 in the third quarter.

Landen Hoggard scored on a 7-yard touchdown run to increase the lead to 63-42.

White chipped in on defense by intercepting a Currituck pass and returned the ball to the Knights 10-yard line.

Following the interception, Twine added a 10-yard touchdown run to increase the lead to 70-42.

Holmes led by 35 points at the end of the third quarter.

Currituck added a touchdown run and a 2-point conversion to make it a 77-50 score early in the fourth quarter.

Twine scored on a 55-yard touchdown run to give the Aces 83 points.

Perez converted the PAT kick to give the Aces their 84th point.

White scored a touchdown on a 32-yard run to give the Aces 90 points and what is believed to be a new record for points scored in a game for the Aces football program.

Perez added the point-after-touchdown kick to give the Aces a 91-50 lead with less than 6:08 remaining in the game.

With Holmes starters out of the game, Currituck recovered a Holmes fumble late in the game.

According to statistics provided by Holmes, the Aces ran the ball 30 times for 660 yards and scored 11 rushing touchdowns.

The Aces completed all three of their passes attempted for 119 yards and converted two touchdown passes.

Individually, Twine had 12 carries for 282 yards and five touchdown runs.

White had eight rushes for 282 yards and five touchdowns.

Landen Hoggard had seven rushes for 24 yards with a touchdown run and completed three passes for 119 yards and two touchdown passes.

According to Currituck statistics on MaxPreps.com, Currituck ran the ball 69 times for 467 yards.

Fisher had 35 rushes for 308 yards with a touchdown run.

Piorkowski had 12 carries for 45 yards and three touchdown runs.

Newman ran for 43 yards on nine rushes with a touchdown, Duke had two rushes for 19 yards, while Damon Gerres had six carries for 51 yards and a touchdown run.

Piorkowski completed 5-of-16 passes for 104 yards and a touchdown with an interception.

Duke caught two passes for 65 yards and a touchdown.

Currituck placekicker Noah Simpson converted on all six of his PAT kicks.

NOTE: The 1969 Holmes football team that won a state championship was honored before the homecoming game.

UP NEXT: Both teams are in action in league games on Friday, Oct. 15 as Holmes travels to Dare County to play Class 3A program First Flight, while Currituck hosts Pasquotank County.

Coach Hoggard noted that it is always tough going down to Dare County to play, especially due to how long the drive is from Edenton to First Flight, which near the beach.

The coach added the Aces need to focus on themselves, try to fix some things that need to be fixed and try to get better going forward.