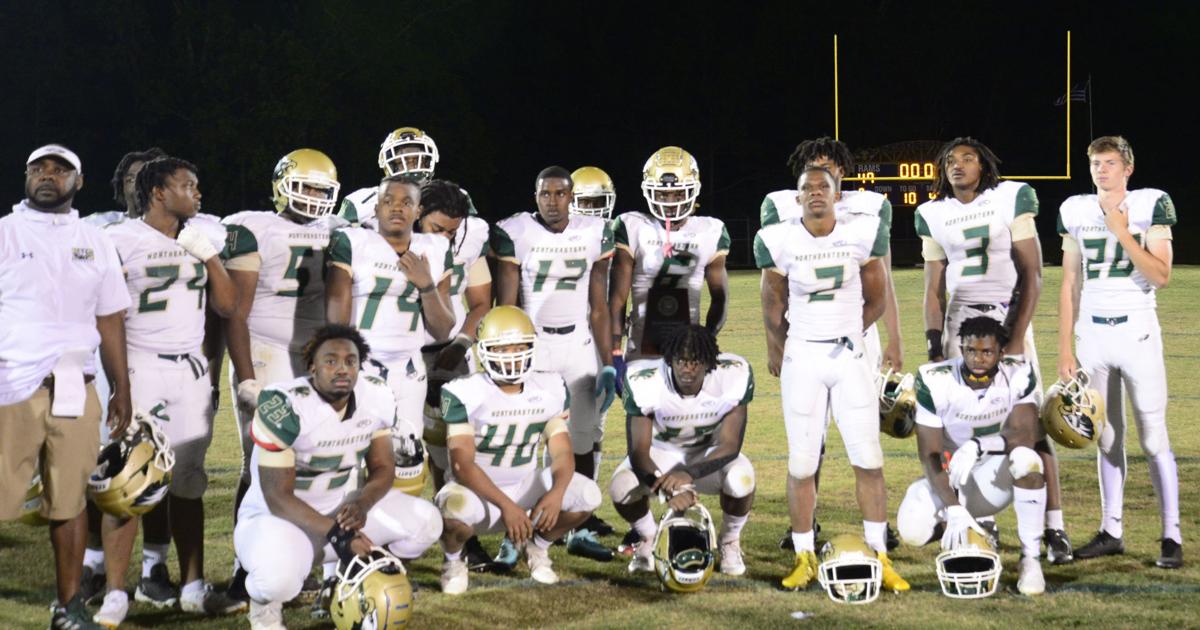 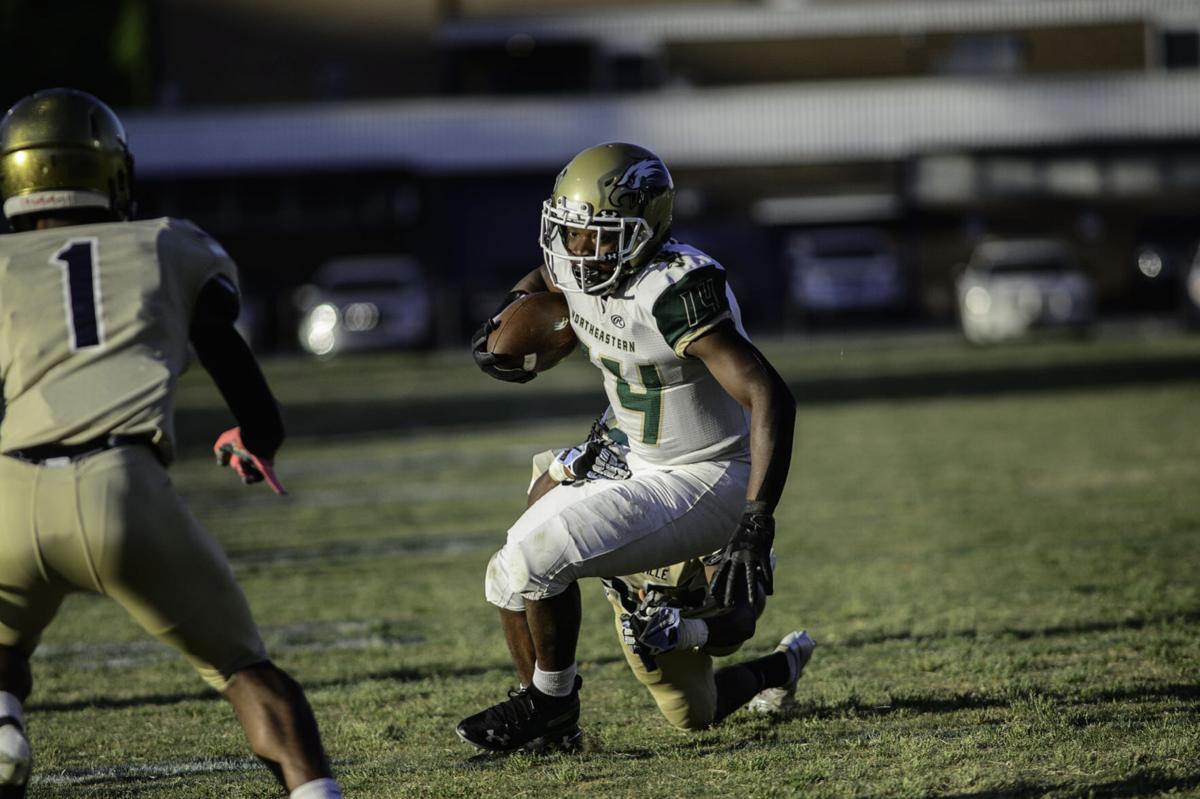 Northeastern’s Zaki Evans (with ball) breaks a tackle for a gain in first half action during the NCHSAA 2A East Regional championship football game against Reidsville, Friday at Community Stadium on the campus of Reidsville Senior High School in Reidsville. 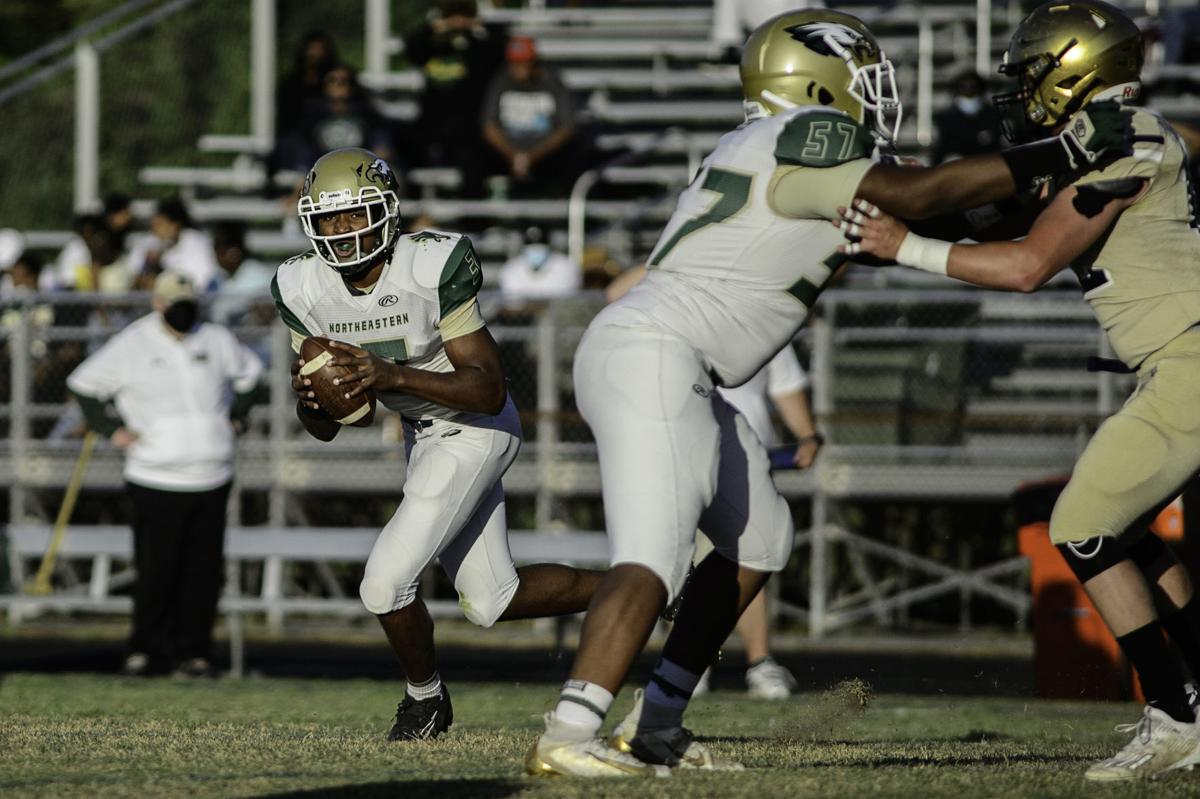 Northeastern’s Deandre Proctor (left) looks to throw the ball while teammate Xavier McNeal (57) blocks a Reidsville player during the NCHSAA 2A East Regional championship football game, Friday at Community Stadium on the campus of Reidsville Senior High School in Reidsville.

Northeastern’s Zaki Evans (with ball) breaks a tackle for a gain in first half action during the NCHSAA 2A East Regional championship football game against Reidsville, Friday at Community Stadium on the campus of Reidsville Senior High School in Reidsville.

Northeastern’s Deandre Proctor (left) looks to throw the ball while teammate Xavier McNeal (57) blocks a Reidsville player during the NCHSAA 2A East Regional championship football game, Friday at Community Stadium on the campus of Reidsville Senior High School in Reidsville.

REIDSVILLE — In previous matchups between Northeastern and Reidsville, the games were close contests to the end.

Friday’s game marked the third consecutive season the teams have met in the 2A tournament.

In 2018 and 2019, the Eagles and Rams clashed in the 2A state championship game, with Reidsville winning both contests.

Because of the COVID-19 pandemic, the Mid-State Conference, the league the Rams are members of, were assigned to the East region for the playoffs in all sports.

In previous playoffs, the Rams were assigned to the West region.

Friday’s game got off to a strong start for the two-time defending East regional champion Northeastern (6-3).

The Eagles had key third down conversions as Evans had a 21-yard reception.

The Eagles utilized a “swinging gate” formation on third-and-4 from the Reidsville 9-yard line as Proctor ran for a first down.

Northeastern senior placekicker Simeon Hurdle added the point after touchdown kick to help NHS take a 7-0 lead with 4:42 in the first quarter.

Hurdle converted on all four PAT kicks in the game.

On the ensuing kickoff, Reidsville senior wide receiver and defensive back Breon Pass returned the kickoff and advanced the ball inside the Northeastern 30-yard line.

A key point of the drive occurred on second down. The Northeastern defense stopped Reidsville senior running back Stevion Harrison on a run play.

The Eagles were penalized for taunting after the stop, which gave the Rams a first down and moved the ball to the NHS 10-yard line.

Harrison capped the drive on an 8-yard touchdown run.

Reidsville placekicker Anthony Franson converted the point after touchdown kick to tie the game 7-7 with 2:30 in the first quarter.

The turning point of the game occurred in the second quarter.

Reidsville punted the ball and pinned the Eagles inside their own 5-yard line. NHS was unable to pick up a first down.

The Eagles punt set up the Rams at the NHS 35-yard line.

Reidsville was able to establish the run as the Rams ended the drive on a Harrison 14-yard touchdown run to take a 14-7 lead with 4:03 to go in the second quarter.

On the ensuing drive, Northeastern faced a fourth-and-5 at its own 36 yard line. Proctor rolled to his right and threw the ball as he was hit by a Reidsville defender.

Reidsville defensive back Kahree Hayes was able to high point and wrestle the ball away from a Northeastern receiver to secure the interception at midfield with 1:28 left in the half.

Reidsville went to the passing game as senior quarterback Kyle Pinnix connected with freshman Queshyne Flippen, who made a one-handed catch, to move the ball to the NHS 10-yard line.

Harrison added his third touchdown of the half from 5-yards to extend the Rams lead to 21-7 with 21 seconds in the second quarter.

Reidsville took a 21-7 lead at halftime.

The Rams got the ball to begin the third quarter and scored 28 points in the quarter. Pinnix scored on a 37-yard touchdown run to extend the lead to 28-7.

After NHS was stopped on fourth down on offense, Pinnix connected with Flippen for a 40 yard pass that set up the Rams at the NHS 3-yard line.

Harrison scored a touchdown on a running play to extend the lead to 35-7.

NHS was able to churn out yards with Proctor and Juan Riddick running the ball on its next drive.

Proctor had a 30-yard run on the drive. Northeastern’s good fortunes ended as Riddick fumbled on a pitch attempt on a run to the outside.

Reidsville recovered the fumble to end the NHS drive at the Eagles 21-yard line.

The Rams mixed in the run and pass on the ensuing drive. Reidsville senior running back Jevon Burton ended the drive on a 24-yard touchdown run to up the Rams lead to 42-7 with 5:17 in the third.

NHS responded with a drive in which Proctor and Webb had success running the ball, while Proctor connected with Sutton on a 13-yard pass.

Proctor ended the drive on a Proctor 6-yard touchdown run to trim the deficit to 42-14 with 2:18 in the third quarter.

Reidsville (9-0) responded on its next drive on a Pinnix screen pass to junior wide receiver Cam Peoples who outran the NHS defense for a 76-yard touchdown reception to up the Reidsville lead to 49-14 with 1:27 in the third.

In the fourth quarter, Northeastern scored touchdowns on a Proctor 33-yard run with 5:06 left and on a Proctor to Sutton 22-yard touchdown pass with six seconds left in the game.

Proctor ran for two touchdowns and threw a touchdown pass.

Proctor had over 175 rushing yards and over 150 passing yards.

Reidsville’s Harrison tallied four rushing touchdowns and over 80 rushing yards, while Pinnix threw for a touchdown and ran for a score.

The Reidsville quarterback threw for over 210 yards and added over 65 rushing yards.

After the game, Northeastern head football coach Antonio Moore noted to his team his appreciation of them for navigating a unique season.

That included playing during the COVID-19 pandemic, along with tension in Elizabeth City following the shooting death of Andrew Brown Jr. on April 21 by a Pasquotank County Sheriff’s deputy.

The Eagles had to play their second round game at Hertford County High School due to the aftermath of the shooting.

The coach also acknowledged the achievements the senior class obtained while playing varsity football at Northeastern.

The class won two NCHSAA 2A East Regional championships and were state runners-up in 2018 and 2019 and played in the regional title game this season.

Reidsville, a program that claims 21 state championships dating back to the 1930s, will play the West regional champion in No. 2 seed Mountain Heritage (7-1) in the 2A state championship game Saturday, May 8 at Kenan Stadium on the campus of the University of North Carolina in Chapel Hill.

Reidsville is the two-time defending 2A state champion.

Go to this story at www.DailyAdvance.com to view video highlights of the game.