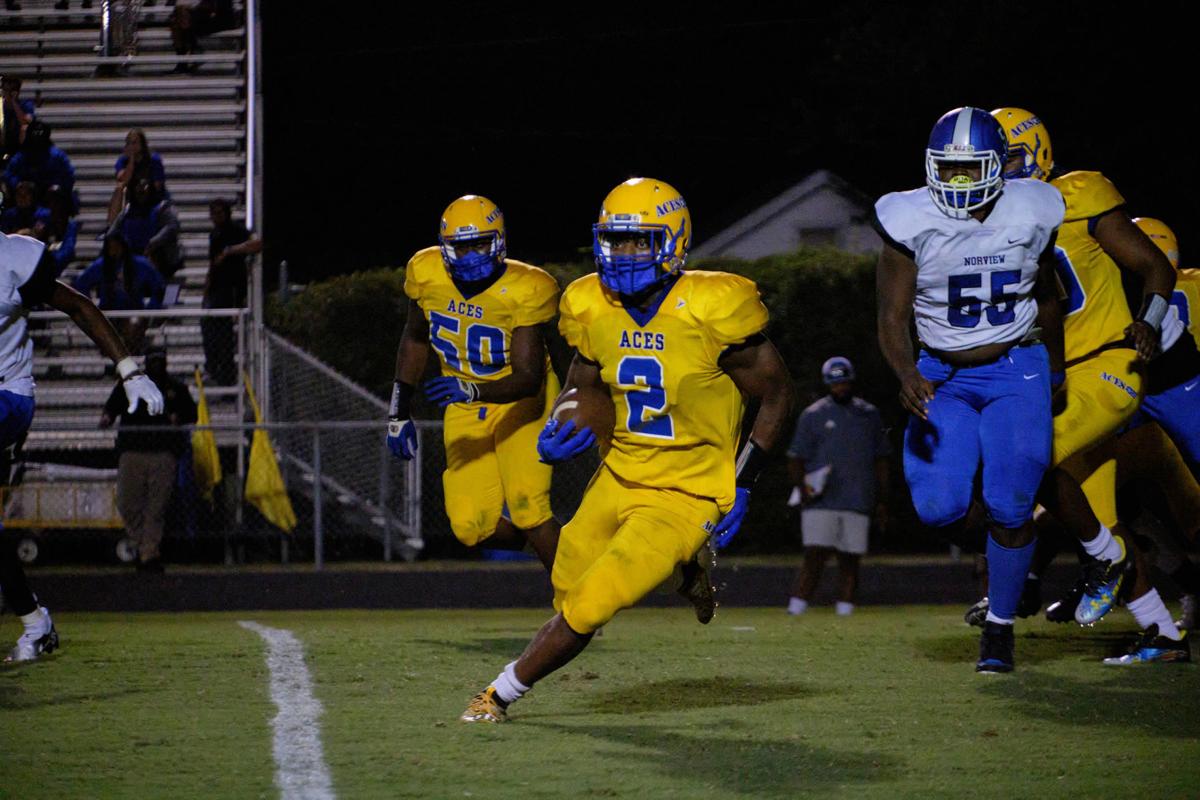 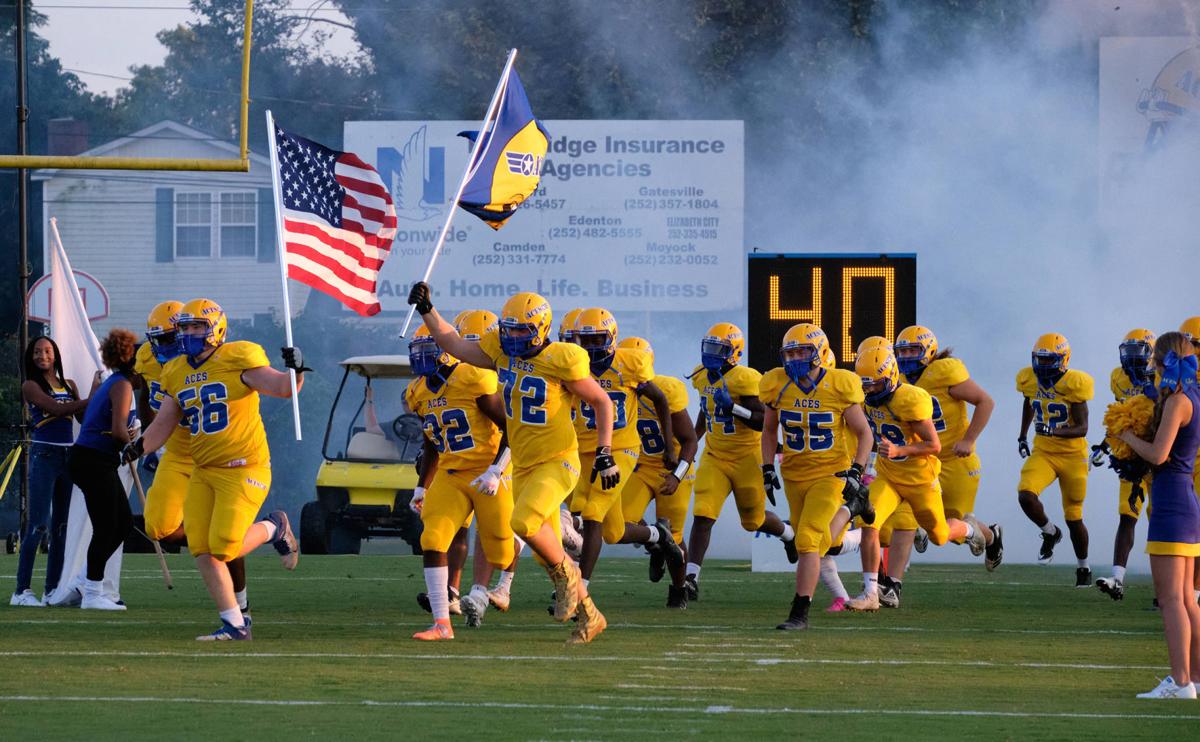 The John A. Holmes football team takes the field. They lost 28-22 in overtime to Norview Friday night.

The John A. Holmes football team takes the field. They lost 28-22 in overtime to Norview Friday night.

EDENTON — The Chowan County community finally had a home football game to watch Friday night at John A. Holmes.

The atmosphere was festive, the music was pumping, the grills were smoking and the fans filled the stands wearing Edenton Aces paraphernalia.

Edenton hosted the Norview Pilots from Norfolk Va., in this battle of the border non-conference game. The contest took an extra session to settle before Norview eked out a 28-22 win.

The Aces won the coin toss and deferred to the second half.

The Norview campaign began on their 30-yard line. The Pilots started off with positive yards moving the ball to 39-yard line. Norview was able to gain a first down, but a penalty and excellent defense from the Aces forced the Pilots to punt.

Edenton began on their own 14-yard line.

On the first play, Aces’ Tyrese McCleese carried the ball for three yards. A few plays later Edenton moved the ball to the 37 for a first and 10. Running back Quan Twine muscled out eight yards, moving the ball to the Aces 45-yard line.

Edenton quarterback Landen Hoggard caught the secondary sleeping and air out a passed to wide open Ireal Hills for a 55-yard TD pass. The P.A.T. was good giving Holmes a 7-0 lead over the Pilots.

Neither team scored on its next possession.

Norview took over on their own 20-yard line pursuant to a Holmes punt. The Pilots’ moved the ball on the ground for two yards and missed a pass connection on the next down bringing them to third-and-8. The Pilots quarterback hit his mark by connecting with his receiver for a 19-yard pass and a first down ending the first quarter.

Norview started the second quarter moving the ball down field. The Pilots quarterback connected again with his receiver and moved the ball to Edenton’s 33-yard line. On the next two plays the Pilots were setback by the defense along with an offensive penalty which moved them back to Edenton’s 46-yard line.

On third-and-15 the Pilots QB shot a missile to his receiver for touchdown. The two point conversion attempt failed making the score 7-6, Aces.

Edenton received the kickoff and started operating from their 27-yard line. Contributions on the ground from running back Jamere Sutton and quarterback Hoggard aided the Aces in acquiring a new set of downs. But the Aces possession would be cut short as Hoggard’s pass was intercepted by Norview’s defense.

Both teams would seesaw back and forth with possessions, but the score remained 7-6 Edenton, at the end of the first half.

In the beginning of the third quarter, Edenton claimed possession of the ball on their own 28-yard line. Norview didn’t have an answer for the Aces’ powerhouse rushing crew. The Aces stomped out 58 yards to the Pilot’s 5-yard line, followed by a 5-yard touchdown run by Twine. The extra point was good and the Aces lead, 14-6.

Once again a non-productive performance by both teams on their next possession leaving the scoreboard the same, Pilots 6 and Aces 14.

But this would soon change as Norview mustarded some offense and scored on a 4-yard run to paydirt to include a successful two-point conversion knotting the score at 14-14.

Holmes struggled on its next possession as the Pilot’s turned the heat up on defense that forced the Aces to punt.

Norview picked up the tempo from their 48-yard line. With a combined effort from both passing and rushing landed the Pilot at the 2-yard line. Their running made easy work of those two yards and punched the ball in for a touchdown. The two point conversion was good. The Pilots took the lead, 22-14.

The Aces came onto the field with a sense of determination as they started first-and-10 on their own 19-yard line.

After a Norview penalty, Hoggard scrambled for seven yards moving the ball to the 31. D.J. Capehart was called upon and produced another seven yards. An additional 15 yards was assessed to play for a personal foul called on the Norview defense. This gave the Aces a fresh set of downs.

The Aces went to their power house running game and gained a couple, but the play the was moved backwards on a offsides penalty. Hoggard connected with Capehart for five yards after the Aces were awarded yard for Norview encroaching the line of scrimmage.

Norview’s anxious defensive was flagged once again, which gave the Aces a first down.

After a series of plays, Edenton was looking at third-and-11. The Aces called a gutsy play and handed the ball of to speedster Twine. Twine rumbled for a 46-yard touchdown. The two-point conversion was successful and the scored tied 22-22.

The Pilots couldn’t score before the clock expired, forcing the game into overtime.

Norview won the toss and started at the 10-yard line. Edenton jumped jumped offsides which put the Pilots five yard closer to the touchdown strip. A few plays later the Pilots were able to punch the ball in.

The Aces took their turn at the 10-yard line. This was a do or die situation for Edenton. The Aces found themselves third and 11. Capehart got the called. Capehart eluded several defenders took the pigskin outside turned the corner was met by several Pilot defenders and stopped at the three yard.