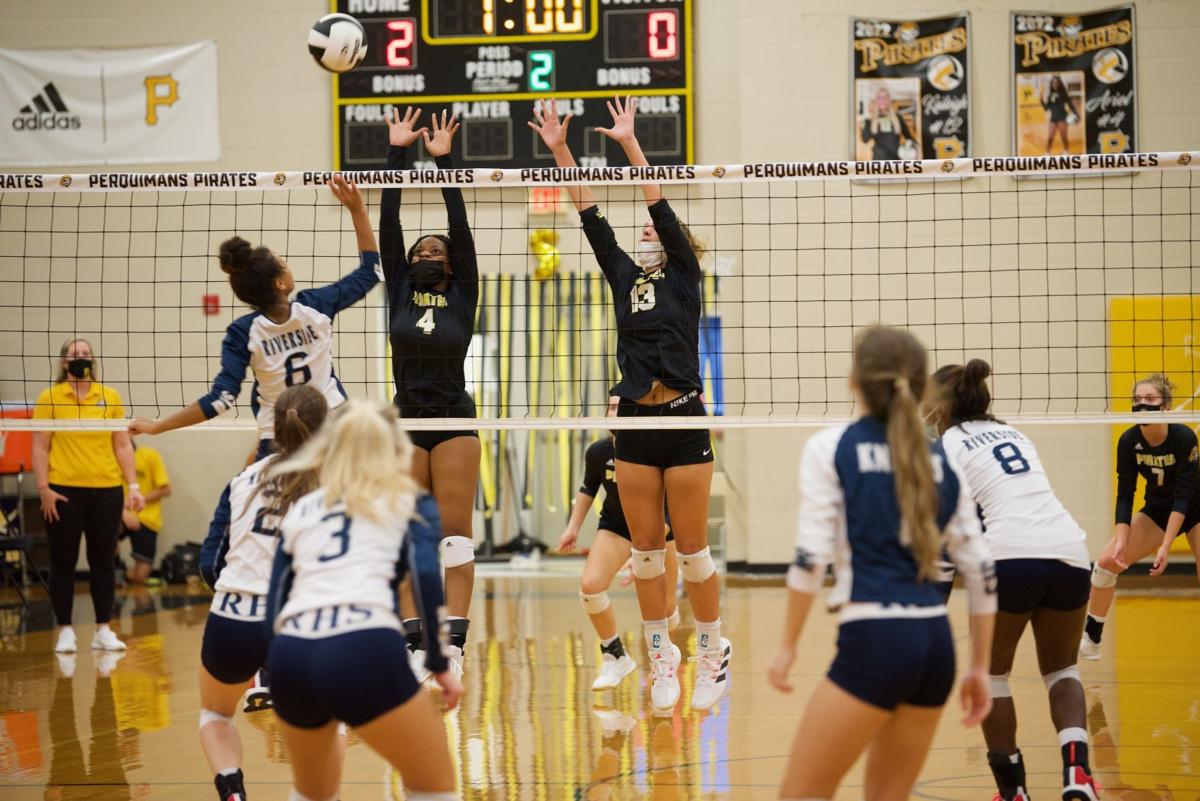 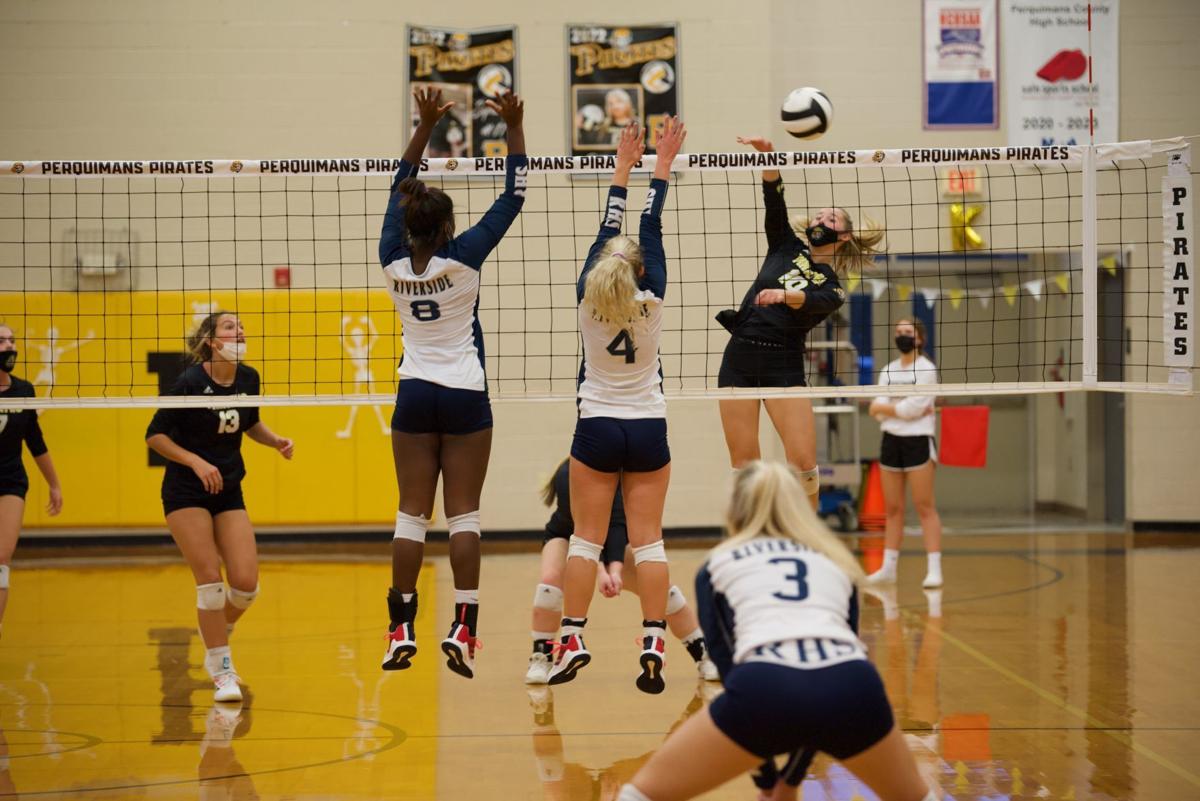 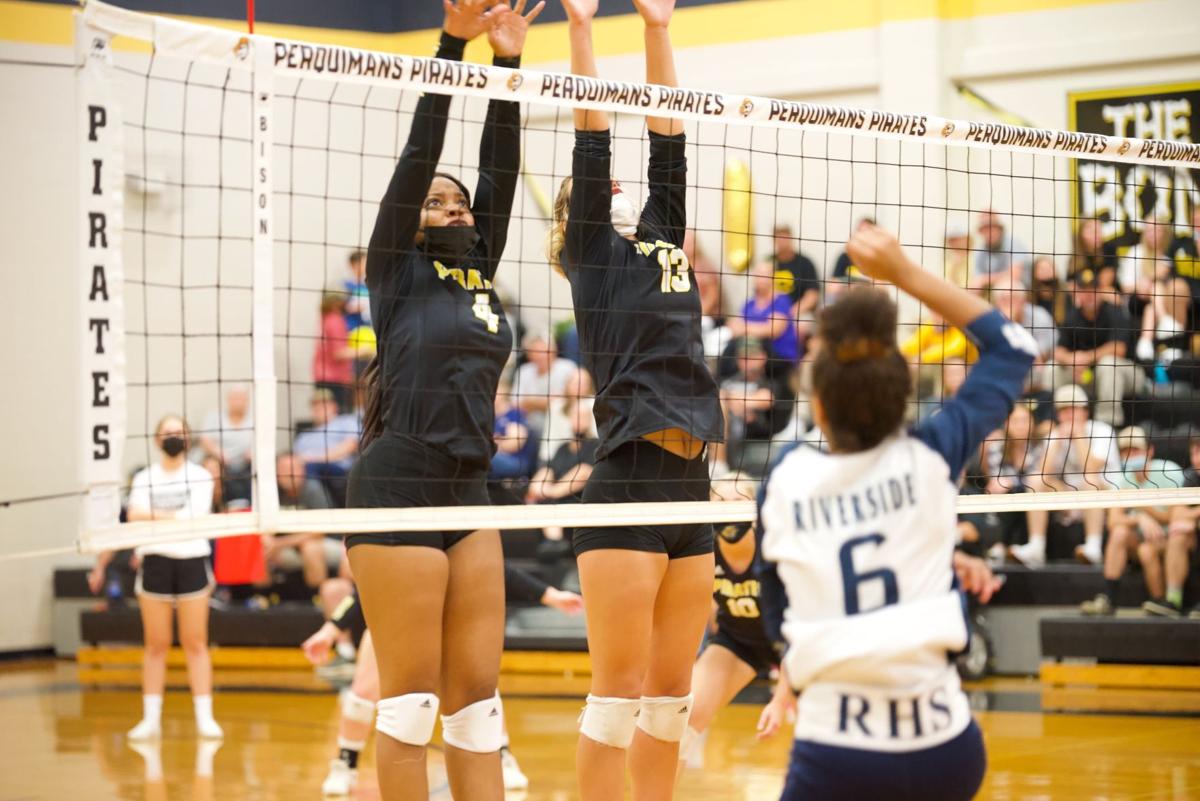 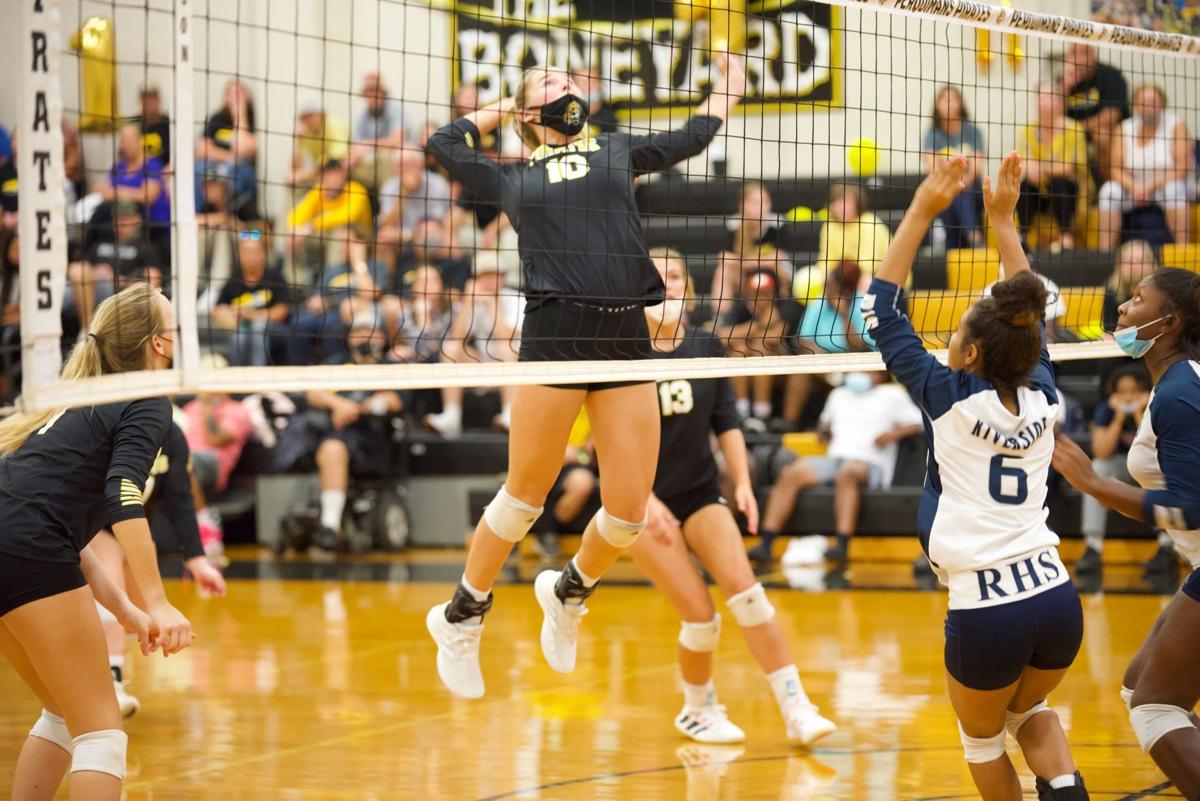 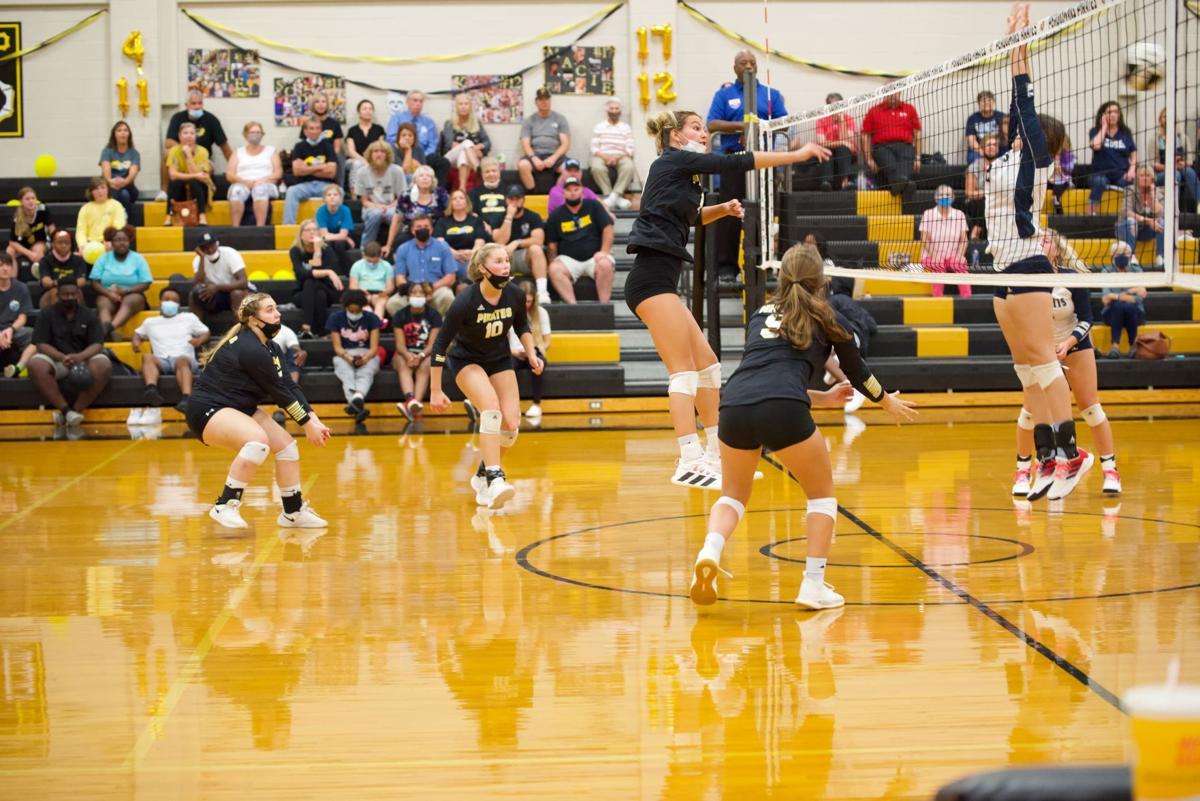 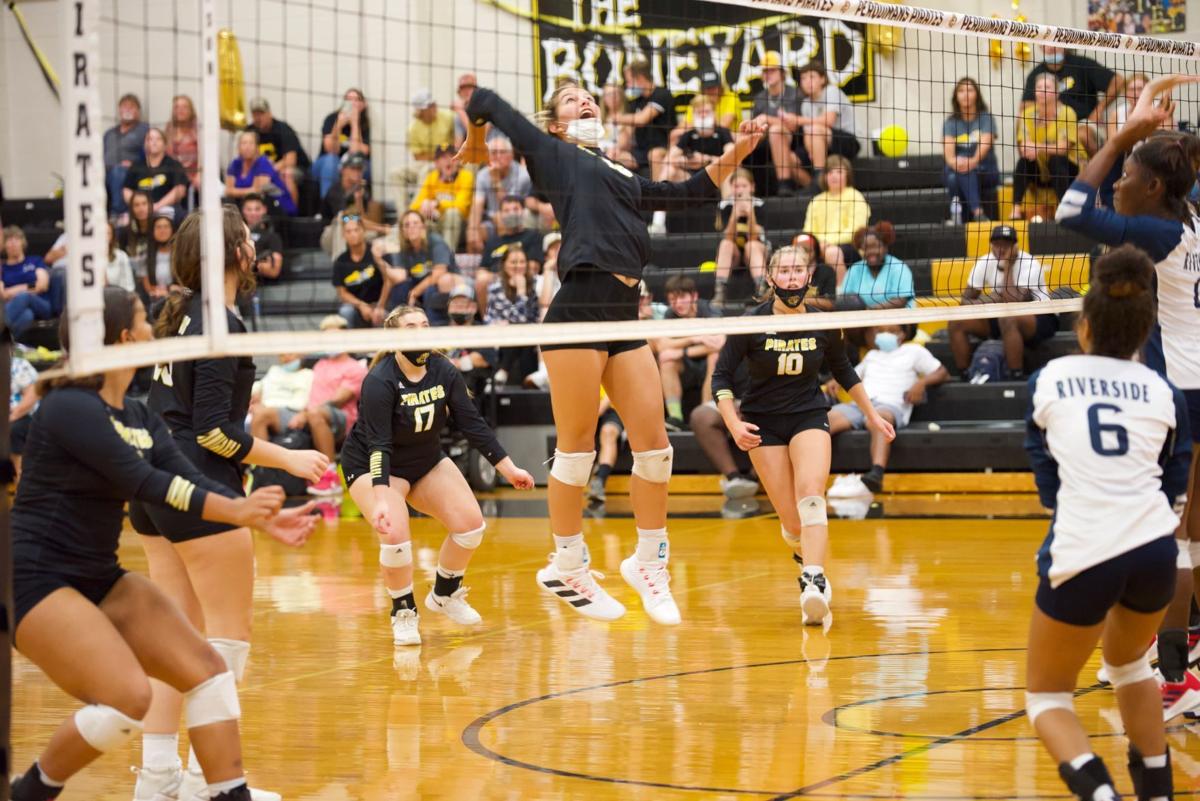 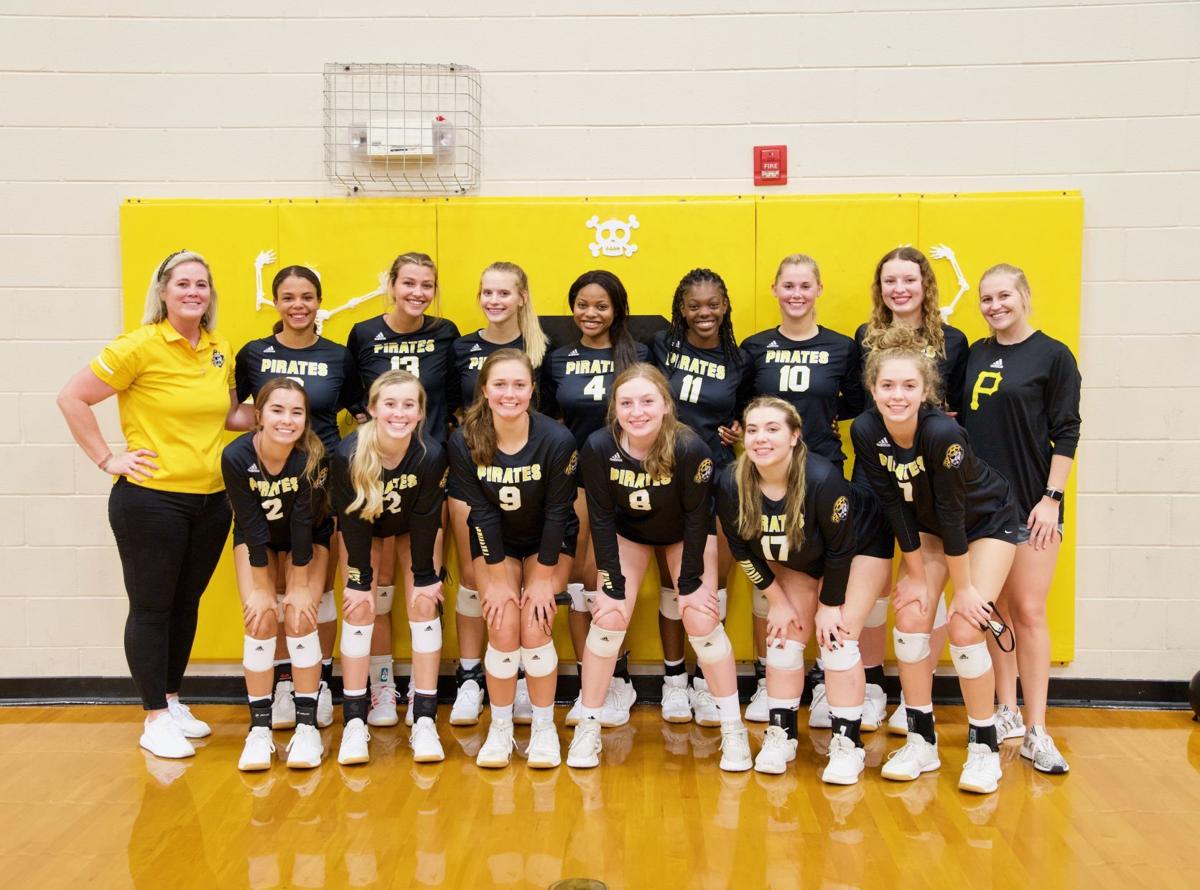 Members of the Perquimans County High School varsity volleyball team pose after winning the Four Rivers Conference regular season championship at home Thursday, Oct. 14. The Pirates defeated the Riverside Knights, 3-0, to run their unbeaten streak in the conference to 13-0 and their regular season mark to 19-1.

Members of the Perquimans County High School varsity volleyball team pose after winning the Four Rivers Conference regular season championship at home Thursday, Oct. 14. The Pirates defeated the Riverside Knights, 3-0, to run their unbeaten streak in the conference to 13-0 and their regular season mark to 19-1.

HERTFORD — The Perquimans Lady Pirates volleyball team defeated the Riverside Lady Knights 3-0 at home on Thursday evening. Set scores for the game were 25-16, 25-15, 25-12.

The Pirates jumped out to a 5-1 lead early in the first set, and set the tone for the rest of the night. Riverside was able to fight back and bring the score to 10-8, before Perquimans finished out the set 25-16.

The second set saw the Pirates jump out to an early 5-0 lead before the Knights took a timeout. Following the timeout, the Knights were able to get some points on the scoreboard, however they could not stop the Pirates dominant attack, and Perquimans won the set 25-15.

The third set began with Riverside taking their first lead in the game, winning the first point of the set. Perquimans was able to put together a 13-3 run, powered by six straight serves from junior Maddie Chaulk. The rest of the set was a back and forth battle, with the Knights fighting hard before Perquimans won 25-12.

“I thought we played really well tonight, and that it was one of the faster paced games that we have played so far. The tempo was great, our hitters were aggressive, passing was good, and I felt that it all came together for us tonight. With it being senior night and the emotions that come with that, I am super proud of the way we played as a team,” Perquimans head coach Krsitie Thach said.

Maddie Chaulk, a junior, led the Pirates with 26 assists, 10 digs, and six aces. Sophomore Daven Brabble led the team with 14 kills and contributed five aces and had a pair of assists and digs. Junior Eby Scaff poured in 13 kills, four digs, three assists and two aces.

With the victory, Perquimans moves to 19-1 on the season, and is undefeated in conference play at 13-0. The Pirates play at Bertie on Tuesday, before finishing the regular season at Camden on Wednesday night. With the loss, the Knights fall to 17-5, and 11-2 in conference play. They play at Manteo on Saturday, before finishing up the regular season at home against Washington County on Tuesday night.

According to MaxPreps.com, Camden’s Tessa Forehand had nine kills, McKayla Knauss had six kills, Carlyn Tanis had five kills, Kenison Parker and Mackenzie Boose had three kills each, while Peyton Carver and Jade Mitchell had one kill each.

Knauss posted a team-best five service aces, Parker and Carver had three aces each, while Kamryn Nash had two aces.

Mitchell paced the Bruins with four total blocks, Parker followed with two total blocks, while Tanis and Forehand had one block each.

Carver led the Bruins with 19 assists, while Tatum had seven assists in the victory.

Singles and doubles tournaments were held.

Prior to the tournament, the NCC all-conference team was announced:

Caroline Boughn and Kylee Dinterman of Currituck and Maili McManus of Manteo.

According to MaxPreps.com, Northeastern quarterback Jalen Melson completed 8 of 10 passes for 223 yards and four touchdown passes.