Camden’s Andre Barnett uses his left hand on a drive to the basket against SouthWest Edgecombe Monday in the annual Wash House Invitational Christmas Tournament in Williamston. Camden won the game 56-52 and played in the championship game Tuesday night against Riverside. 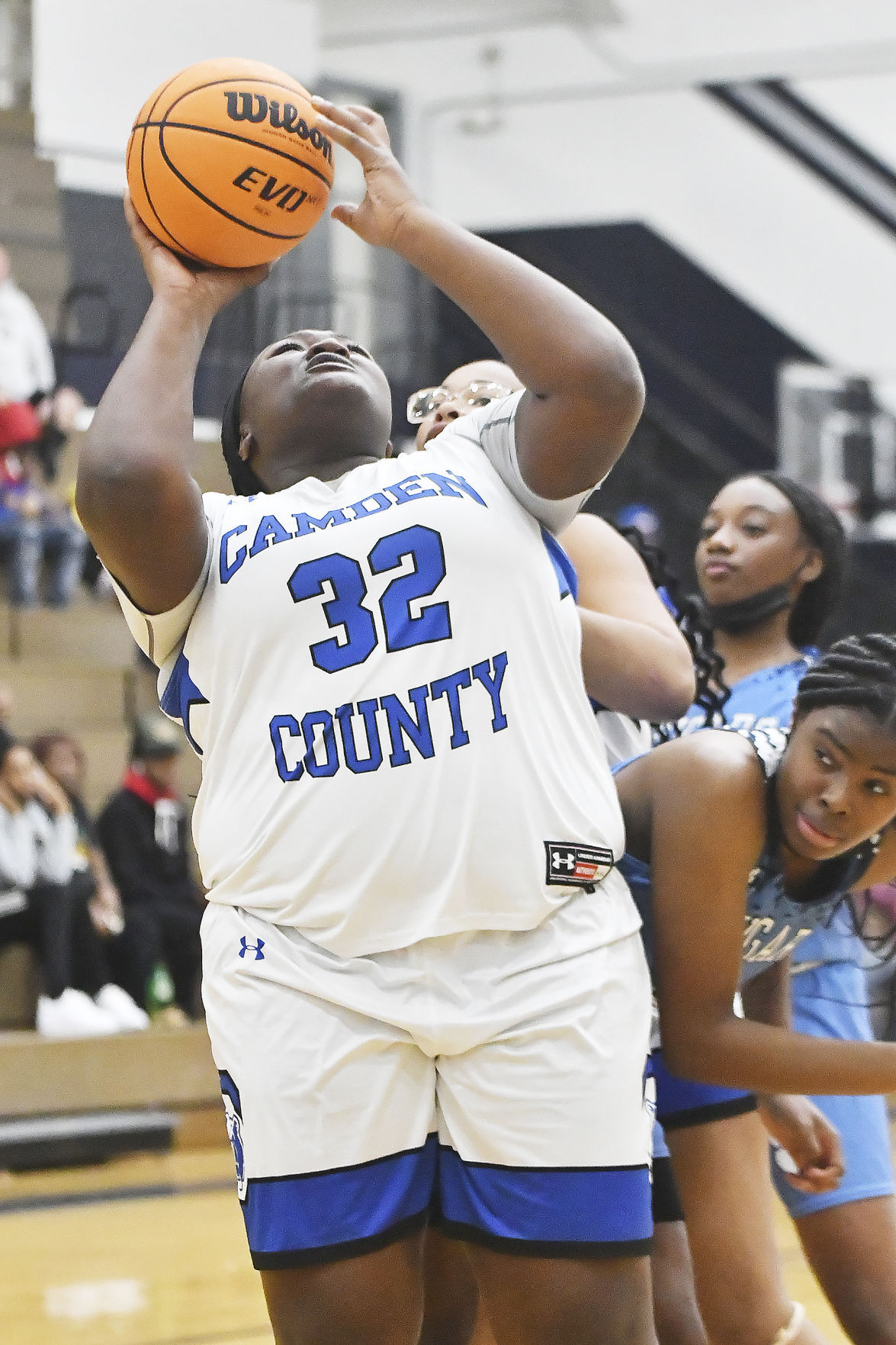 Kennedy Lighty scored 17 points for the Camden girls in a loss to SouthWest Edgecombe in the annual Wash House Invitational Christmas Tournament Monday night in Williamston.

Camden’s Andre Barnett uses his left hand on a drive to the basket against SouthWest Edgecombe Monday in the annual Wash House Invitational Christmas Tournament in Williamston. Camden won the game 56-52 and played in the championship game Tuesday night against Riverside.

Kennedy Lighty scored 17 points for the Camden girls in a loss to SouthWest Edgecombe in the annual Wash House Invitational Christmas Tournament Monday night in Williamston.

While the Bruins advanced to the boys championship game at 9 p.m. Tuesday, other local teams suffered close losses in the other first-round contests.

John A. Holmes in Edenton took Riverside to overtime but fell 82-75 in the other boys game; Camden’s girls team lost 39-36 to SouthWest Edgecombe and Holmes’ girls team fell victim to a Riverside rally on the way to a 53-49 defeat.

The tournament concludes today with Camden facing Holmes at 4:30 p.m. in the third-place girls game, followed by the third-place boys game at 6 p.m. between Holmes and SouthWest Edgecombe.

Charlie Pippen and Andre Barnett came up clutch by hitting free throws in the waning seconds to lift Camden past SouthWest Edgecombe.

Isaiah Hill drained a big three-pointer at 1:41 left to push the Camden lead back to six, but free throws by Whitehead and Xavier Mayo and a basket by Whitehead sliced the Bruins lead to just two, 52-50, with 18.4 seconds remaining.

Pippen was fouled coming out of a timeout, and he calmly sank two foul shots to put Camden up by four.

Mayo’s basket with four seconds left cut the lead to two again, but Barnett sank a pair of free throws to clinch the win for the Bruins.

Camden hit three 3-pointers (two by Brent Mansfield and one by Pippen) to grab a 17-11 lead after one quarter.

A triple from Romeo Paxton and a bucket from Barnett extended the Bruins’ advantage to 14 (25-11) in the second quarter before the Cougars used a 10-5 run (Mayo, Whitehead and Rodney Pettaway) to cut the deficit to 30-21 at halftime.

SouthWest was able to trim the deficit to six on two occasions in the third quarter before Camden got three-pointers from Hill and Xzavior Wiggins at the end of the quarter to push the Bruins in front by nine (45-36).

Hill led Camden with 13 points, while Pippen and Barnett added 12 each.

Mayo poured in 24 points, 22 of them coming after the first quarter. Pettaway added 15 while Whitehead chipped in with 10 for SouthWest Edgecombe.

Despite balanced scoring and three players in double figures, John A. Holmes managed just one basket in overtime (Taysean Williams) in a seven-point loss to the Knights (3-3 overall).

Williams’ rebound follow shot tied the score at 71-all with 2:49 remaining in the extra session. But Riverside took the lead for good at 2:13 on a basket by Jamir James, who added an old-fashioned three-point play to make the score 76-71 with 1:19 left.

The Aces (1-4) missed their final three shots and turned the ball over twice in the waning seconds. The closest they could get was three points (78-75) on two free throws by Ireal Hills with 37.7 seconds left; the Knights sealed the win with clutch free throws from James and Darius Lewis in the final 27 seconds.

Matt Winborne’s spinning basket with 19.4 left gave the Aces their final lead (68-67), but James made one of two foul shots with eight seconds remaining to send the game into overtime, which was Riverside’s fourth straight.

Bridgett led Holmes with 16 points, followed by Divon Ward with 15 and Winborne with 13. Naijhir White and Hills provided nine and eight points, respectively.

The Aces led after three quarters, but they only managed three baskets in the fourth stanza (two from Kaci Drew and one from Sydney Spear) as Riverside rallied for its first win of the season.

Two three-pointers by Sydney Spear, four points from Drew and baskets from Turner, Dyman Rankins and Carson Ray enabled the Aces to maintain their advantage at the end of the third quarter, 43-39.

Riverside only had two baskets in the final quarter, but the Knights made 9 of 14 free throws (four from Jermaria Brown, three by Keary Jones and two by Zion Jenkins) to complete their comeback.

Riverside was led by 28 points from Jones and 12 from Jenkins.

Camden led most of the first half but a basket by Morgan Lee in the final 23.8 seconds gave the Cougars the lead for good, and SouthWest Edgecombe held on in the second half to give head coach Sandra Langley her historic 800th career victory.

The Bruins (3-3) broke out to an 8-0 lead in the first quarter behind a pair of three-pointers from Janay Cordy and a bucket from Kennedy Lighty. The Cougars scored seven of the next nine points to pull within three (10-7).

Lighty’s three-pointer and a bucket from Faith Underwood were the only baskets for Camden in the third quarter, but the Bruins only trailed by six (30-24).

Camden was able to slice the deficit to two (30-28) on a pair of baskets by Lighty to begin the fourth stanza, but the Cougars got free throws from Aaliyah Whitehead, Jer’lisha Pridgen and Rubi Sanchez down the stretch to hold off the Bruins.

SWE was paced by Whitehead with 11 and Pridgen with nine.