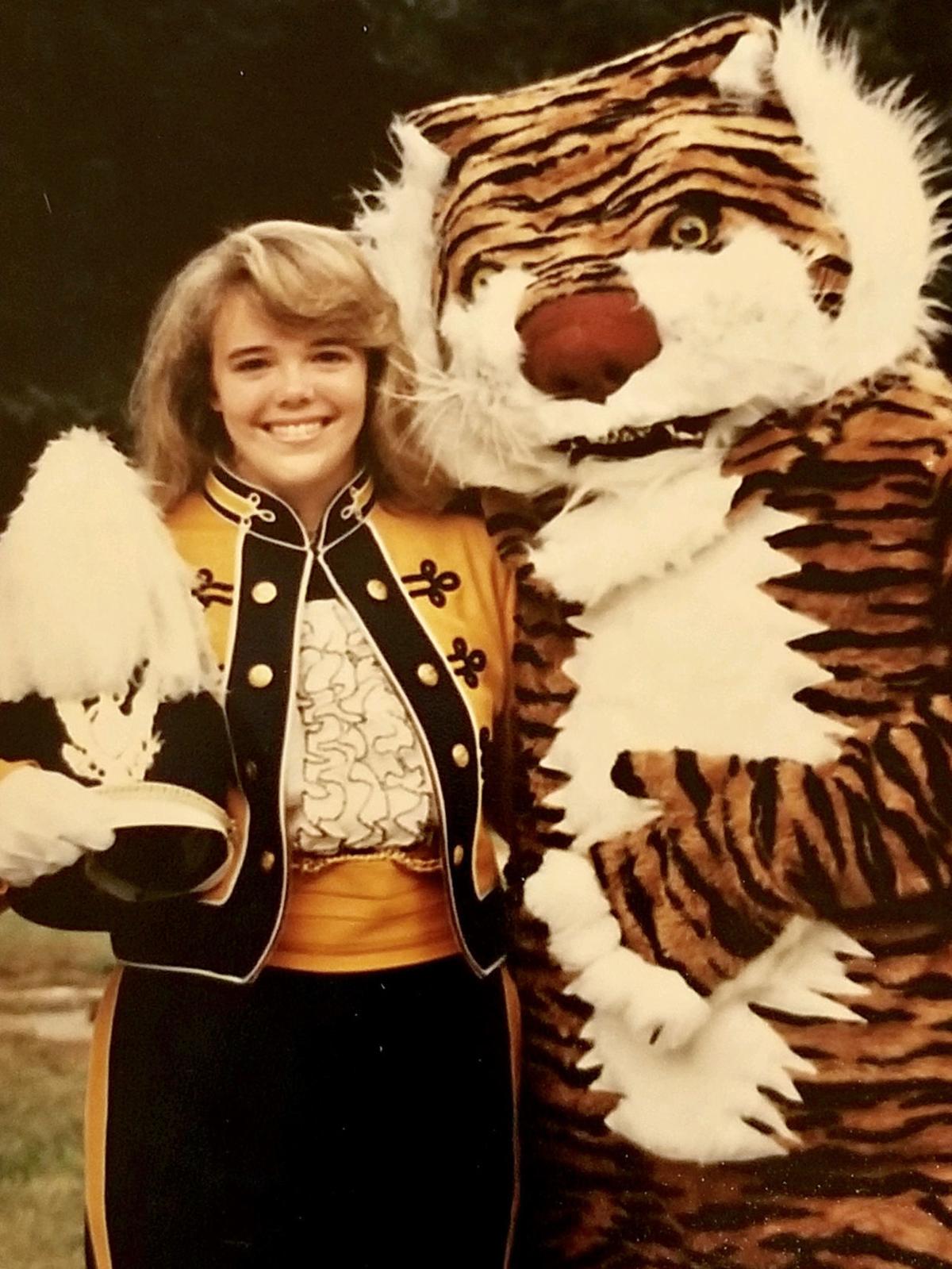 L-r: Barbara Outland with LSU mascot Mike the Tiger. Outland was a member of the LSU marching band from 1987-1991. 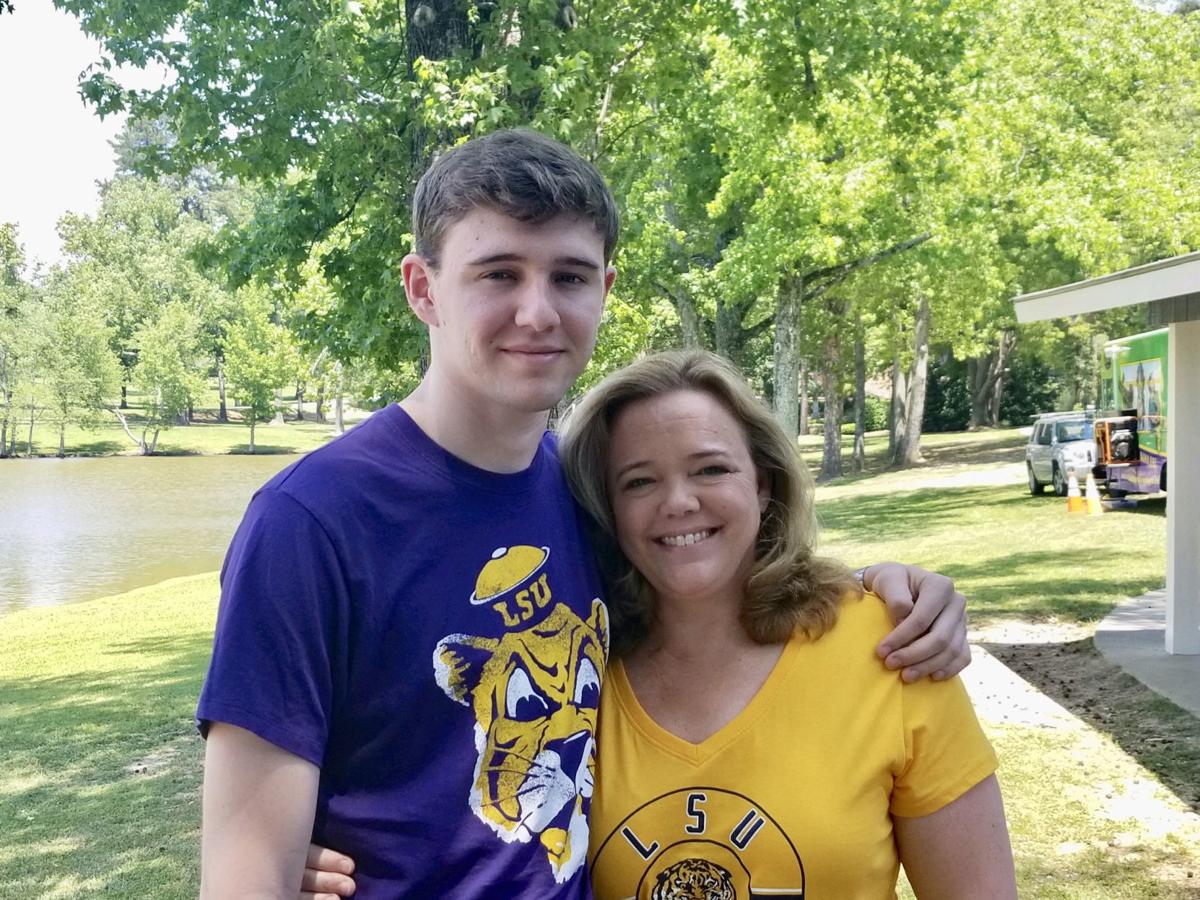 R-l: Barbara Outland with her son Robby at an LSU crawfish boil in Raleigh in May. Barbara Outland is a Louisiana State University alum that is an administrator at Ridgecroft School in Ahoskie. She and her family will be cheering for the LSU Tigers in tonight’s College Football Playoff national championship game.

L-r: Barbara Outland with LSU mascot Mike the Tiger. Outland was a member of the LSU marching band from 1987-1991.

R-l: Barbara Outland with her son Robby at an LSU crawfish boil in Raleigh in May. Barbara Outland is a Louisiana State University alum that is an administrator at Ridgecroft School in Ahoskie. She and her family will be cheering for the LSU Tigers in tonight’s College Football Playoff national championship game.

After her first college football game as a member of the Louisiana State University marching band in the late 1980s, Barbara Outland was hooked on LSU football.

Years after her final game playing the baritone in LSU’s “Golden Band from Tigerland,” the passion for LSU football remains.

Outland and her family hope LSU can complete a dream season with a win in tonight’s College Football Playoff national championship game against the defending national champion Clemson University.

Outland, who grew up in Lafayette, Louisiana, said in an email interview with The Daily Advance Saturday that she didn’t grow up following LSU sports, but her family followed LSU Tigers athletics.

That all changed when she marched onto the field at Tiger Stadium for her first football game as a member of the “Golden Band from Tigerland.”

“I mainly remember the crowd noise,” Outland said of her first LSU home football game. “I had never heard anything so loud. The LSU band starts its pregame show by playing the first four notes of “Hold that Tiger” slowly to each of the four sides of the stadium. It’s called the “Stadium Salute.” After we played the notes on each side, the crowd would roar. It was, and still is, deafening.”

During her time as a member of the band, Outland noted that she had some memorable moments at LSU games.

“I was there for what they call “The Earthquake Game” in 1988,” she said. “LSU upset then #4 Auburn by a score of 7-6. LSU was shut out the entire game. Then, with 2 minutes left in the game, LSU drove the length of the field to score a touchdown on 4th and 11 with very little time remaining. The crowd’s celebration registered as an earthquake on the seismograph in the Geology Department across campus.”

After football season, Outland remained involved with LSU athletics as a member of the pep band — Bengal Brass — during basketball season.

Her time playing on the pep band was during the same time NBA legend and Basketball Hall of Famer Shaquille O’Neal played on the LSU men’s basketball team from 1989-92.

LSU has a tradition of having a live Bengal Tiger at games. Outland noted in 1990, she was able to pet Mike V when he was introduced as a cub before a basketball game.

Outland, who was a member of the band from 1987-91, also met costumed mascot Mike the Tiger while with the band.

Both have Tigers as mascots. Both use the moniker “Death Valley” to describe their football stadiums and both bands play the song “Tiger Rag” during games.

So what makes LSU’s version of “Tiger Rag” special?

“The two versions are strikingly similar, but I like to think the LSU version has a bit more of a New Orleans ragtime jazz feel to it,” Outland said. “And we slow it down at the end so that the crowd can spell out T-I-G-E-R-S- Tigers! The entire stadium cheers in unison and it is pretty impressive.”

Outland, who is the Director of Upper and Middle School and Director of Admissions Administration at Ridgecroft School in Ahoskie, has a deep connection to LSU.

While pursuing her master’s degree at LSU, she met her husband, Rob who was at LSU pursuing a doctorate degree.

Her husband, who has a bachelor’s degree from Wake Forest University, is a native of Northampton County’s Rich Square.

Both worked at LSU during the 2000s and their two children, Robby and Mary, spent their early years on campus at LSU.

Barbara noted that her kids are LSU fans.

The Outland family relocated to Rich Square in 2010 to help the commercial farming operation on her husband’s side of the family.

Robby is a member of the Wake Forest University marching band.

LSU (14-0) is aiming for its first national championship since the 2007 season.

A win tonight in the Superdome against Clemson (14-0) would give LSU its first national championship in the College Football Playoff era and its fourth overall claimed national title.

Barbara noted what has been special about LSU’s season is the fact that LSU has been so good on offense.

“LSU has always been a defensive team, so to watch our offense break records; our quarterback, Joe Burrow, win the Heisman; and our team stand at 14-0 just one game away from a national championship has been a dream come true,” she said.

Barbara noted she realized how extreme the passion others had for LSU football after she and her family relocated to eastern North Carolina.

She noted how other LSU supporters schedule weddings around the football season.

Barbara added that the LSU alumni in North Carolina is very active and passionate about the program.

The LSU alumni chapter in Raleigh has watch parties for LSU home games and has a crawfish boil event every spring.

Barbara acknowledged that winning the national championship is more than about football for LSU, its fans and the state.

“This year’s LSU team is a source of tremendous state pride for Louisiana. It’s been an amazing season, but it is made all the more special because we have a Louisiana native, a Cajun even, leading the team in Coach Ed Orgeron,” she said.

She added that Burrow’s emotional acceptance speech after winning the Heisman trophy last month and his connection with Orgeron exemplified the connection between the team, their coach, and the entire state.

“I believe any LSU fan would tell you that this season is already one to remember, but to finish it off with a National Championship would be the perfect ending to a fairytale season,” Barbara said.

Since Barbara has to be at work Tuesday, she will be watching the game at home with her husband with crawfish etouffée ready to eat.

If you pass a house with a Louisiana state flag and an LSU flag in Rich Square, it’s probably the Outlands.