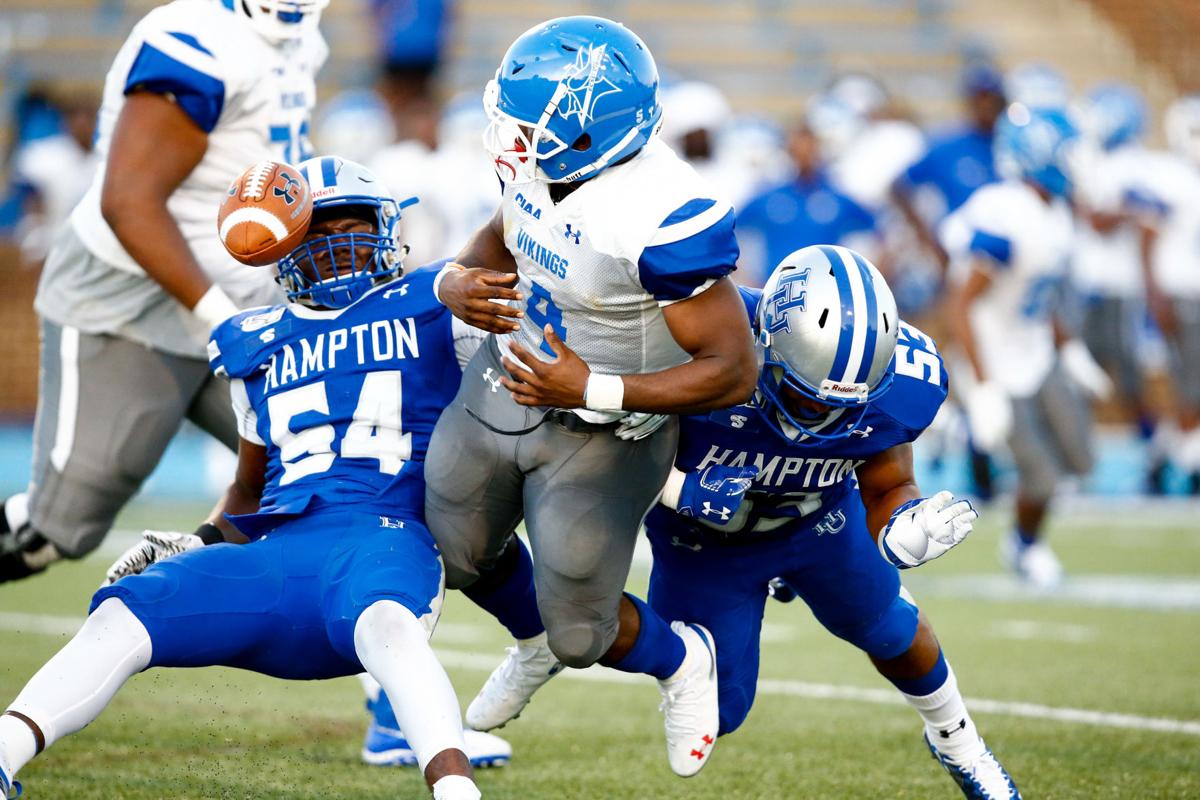 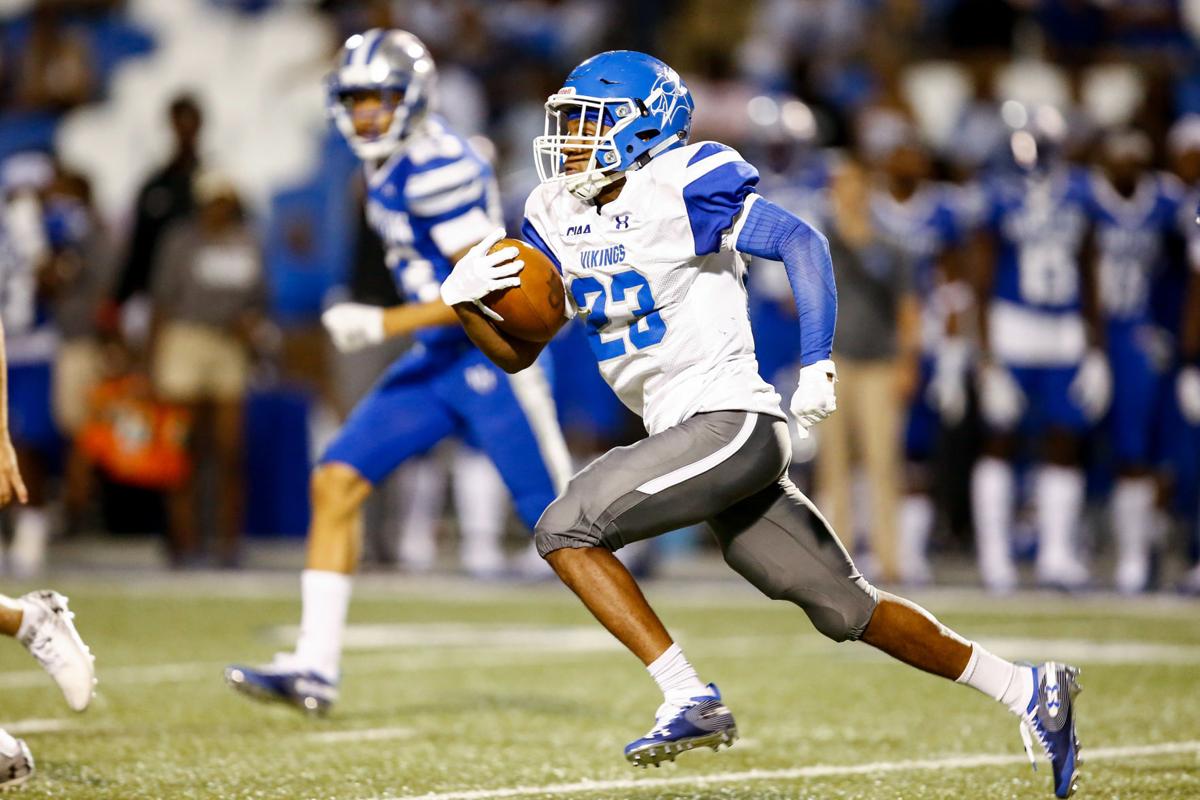 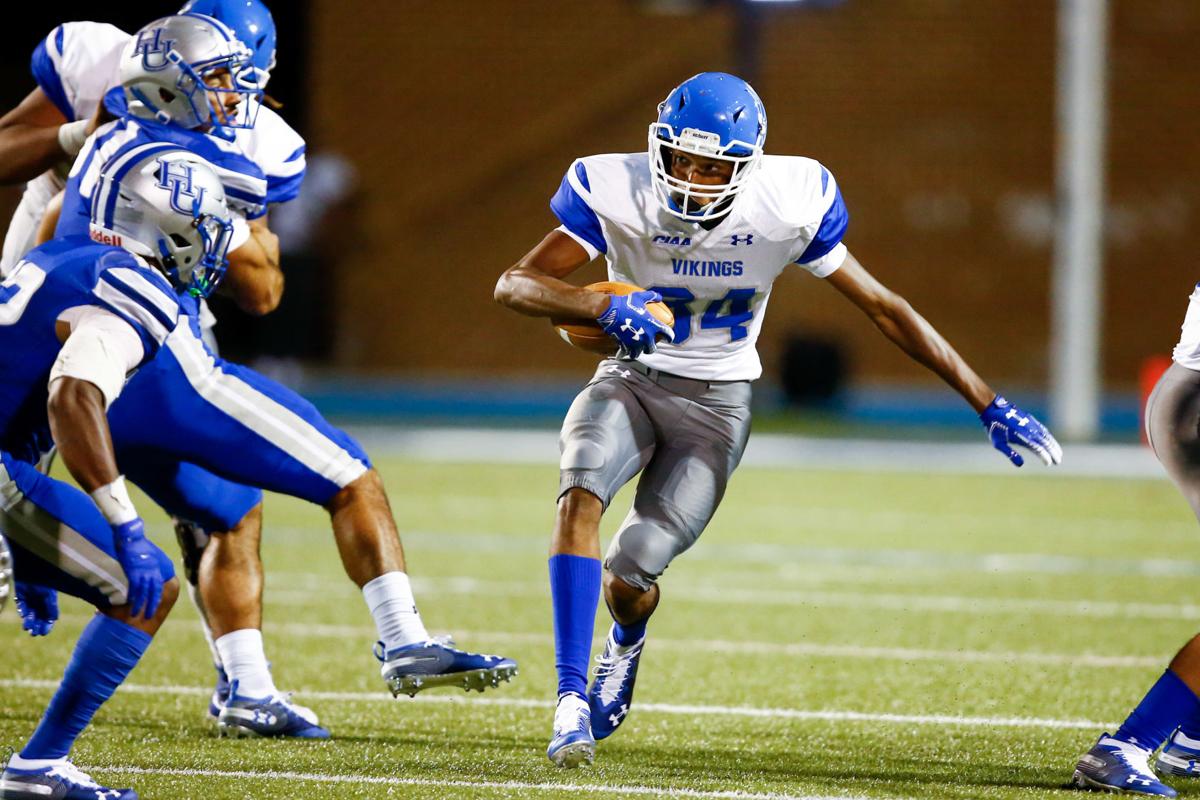 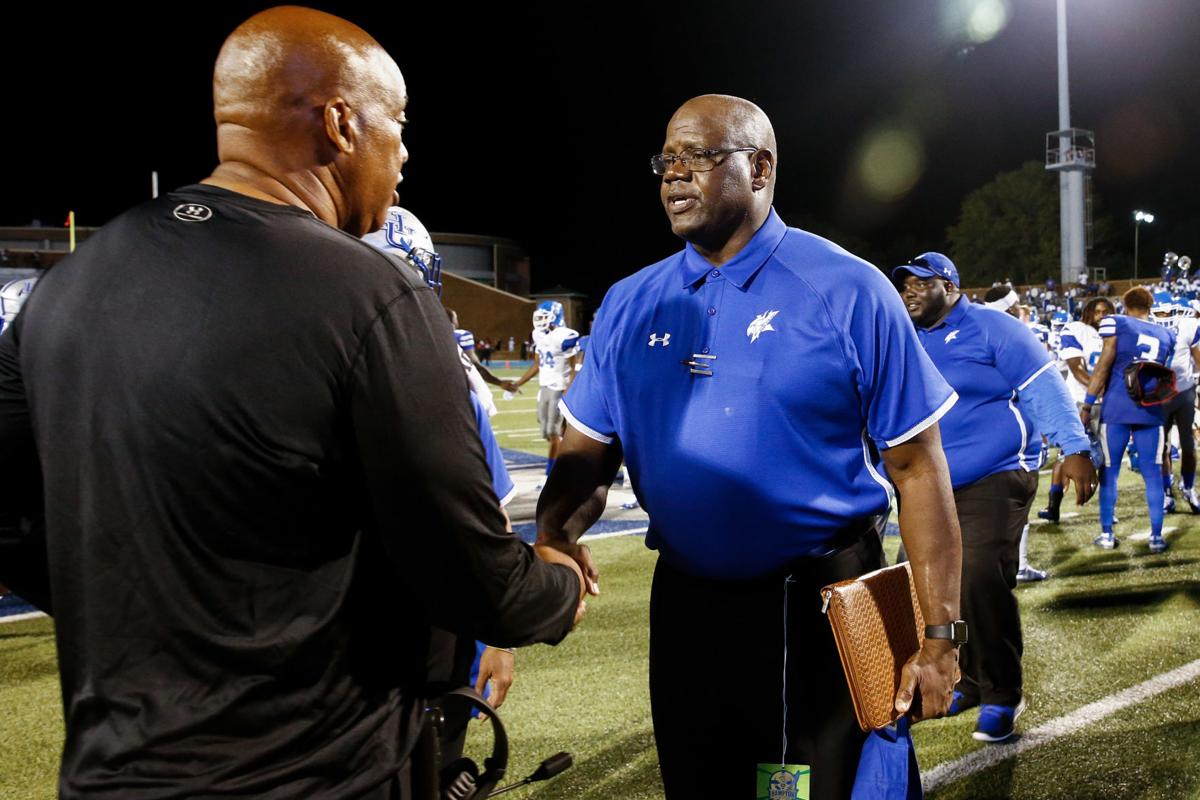 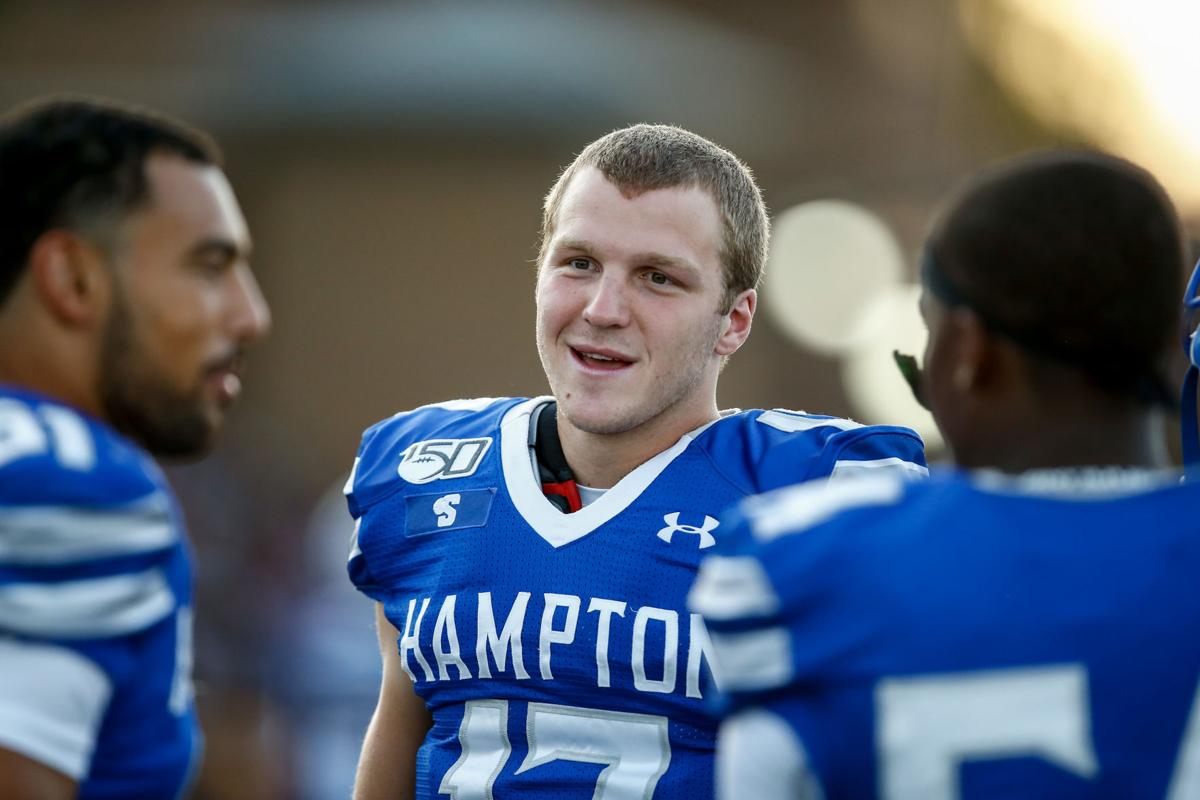 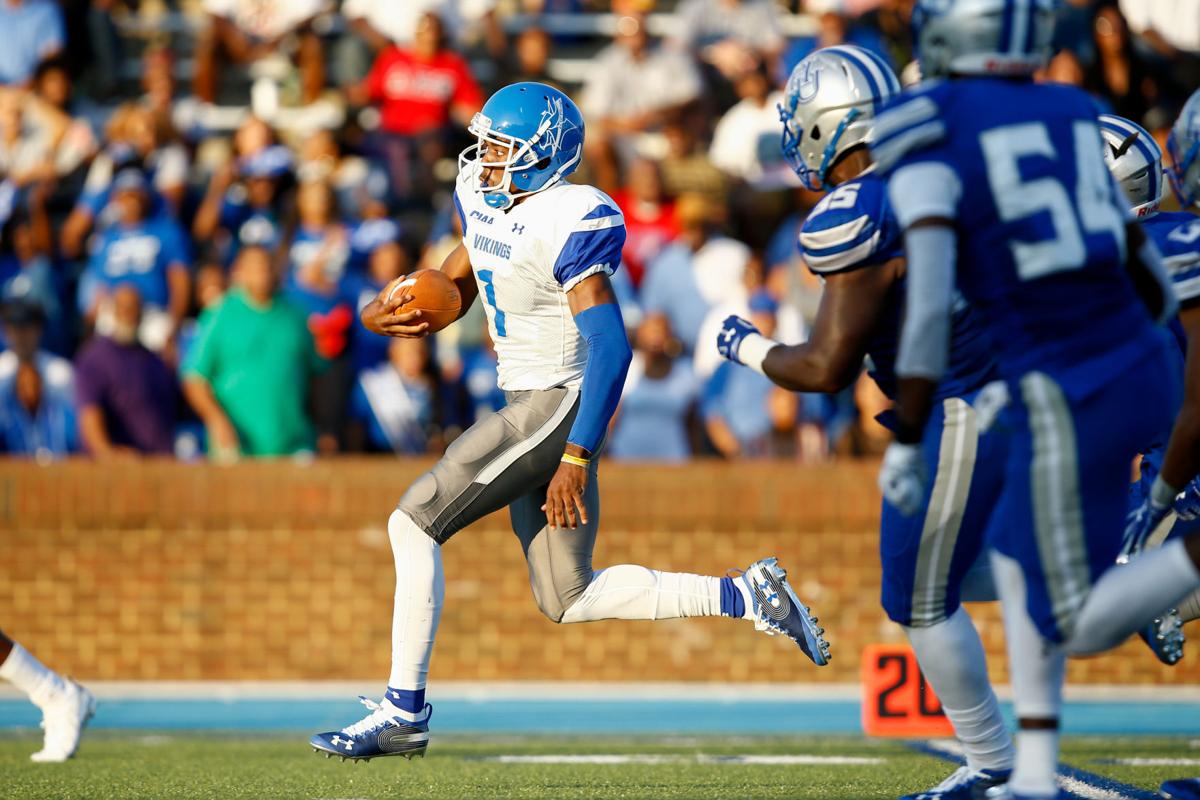 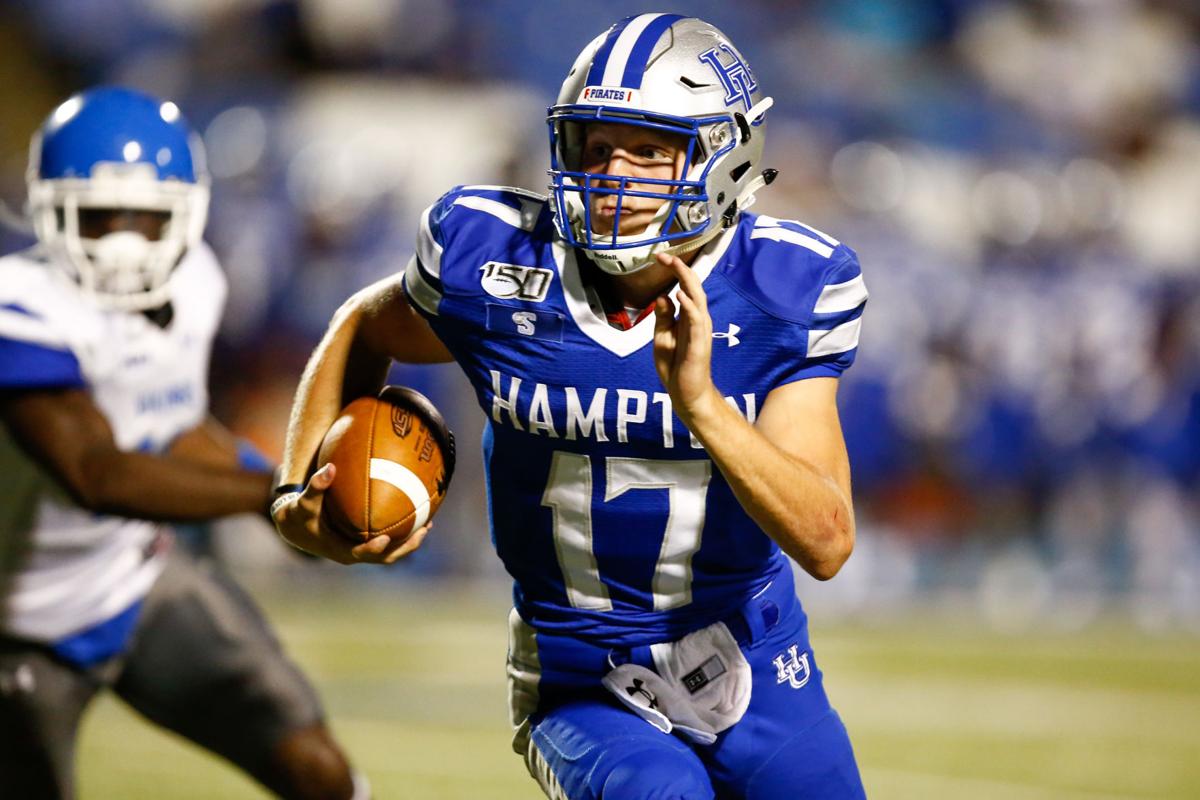 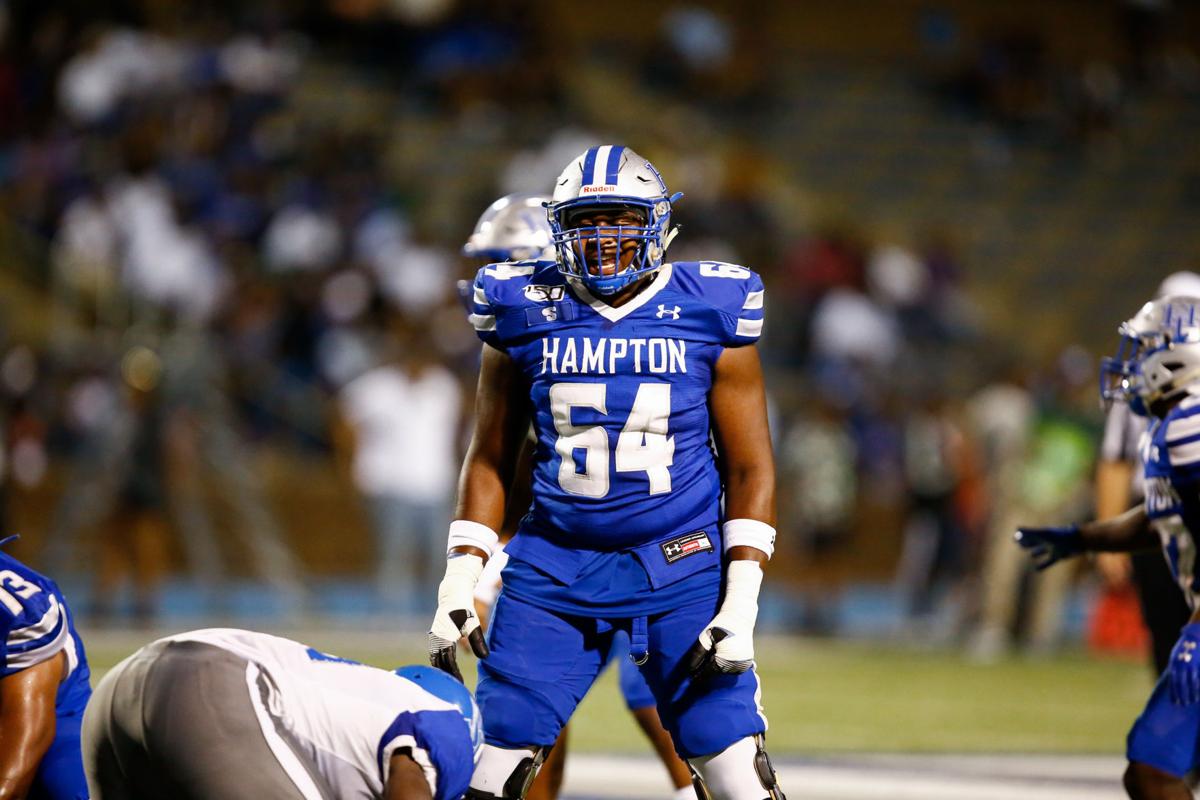 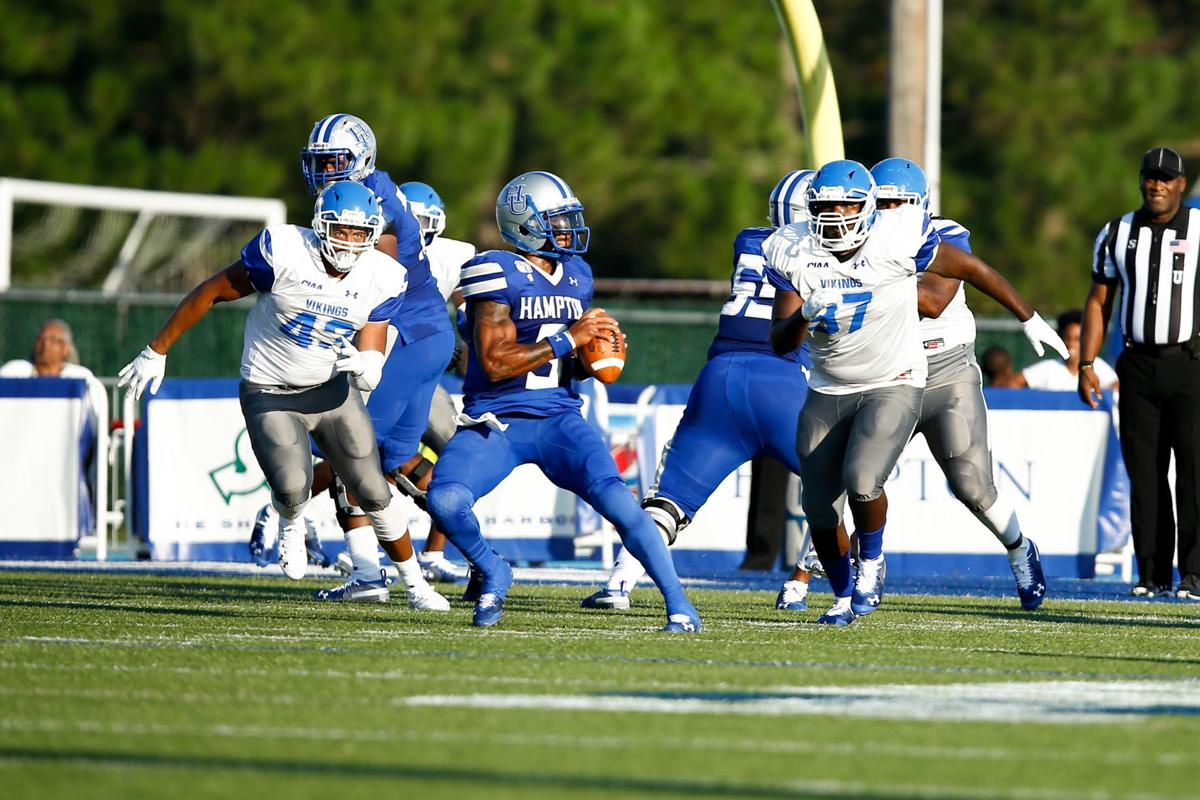 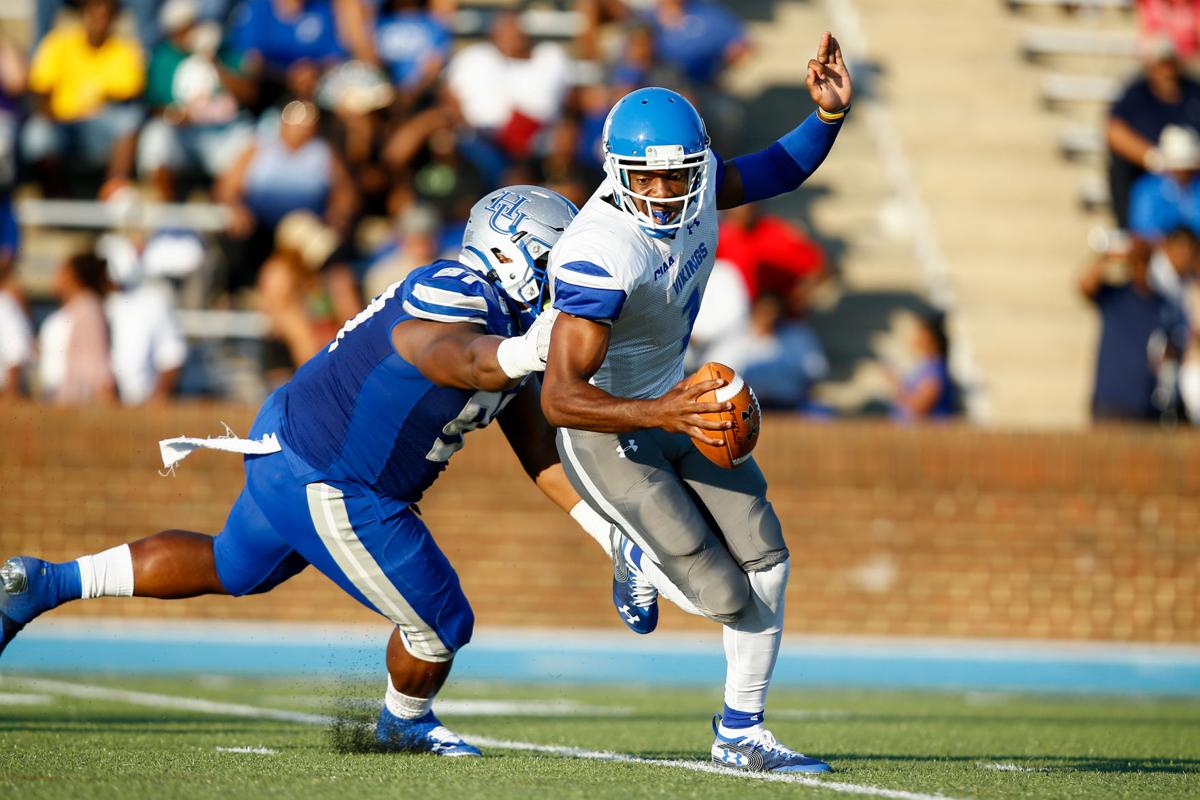 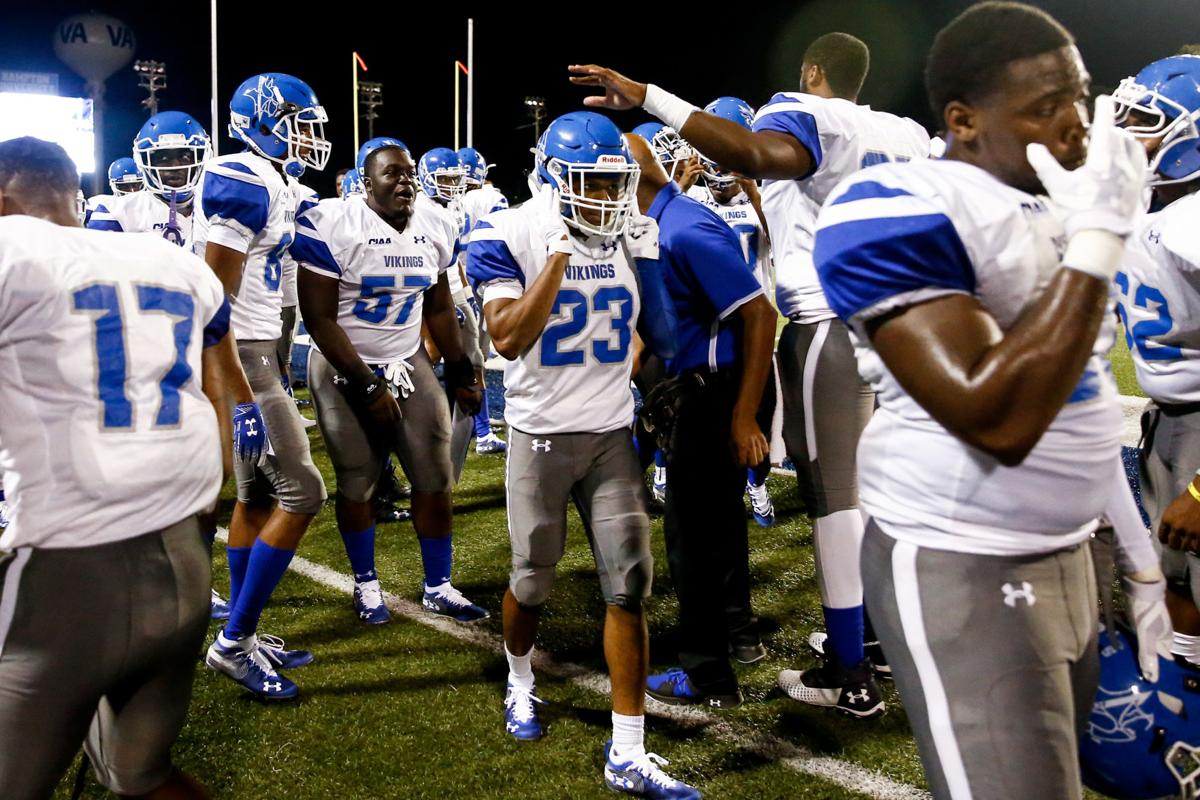 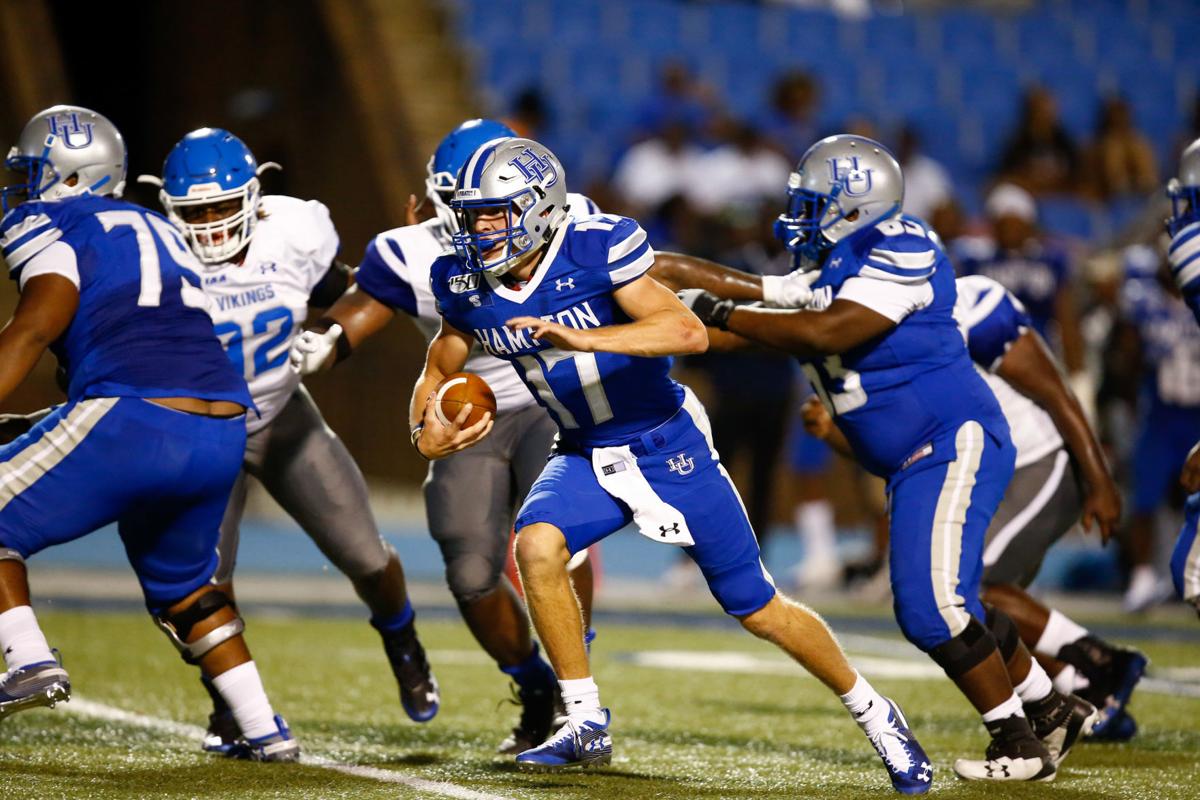 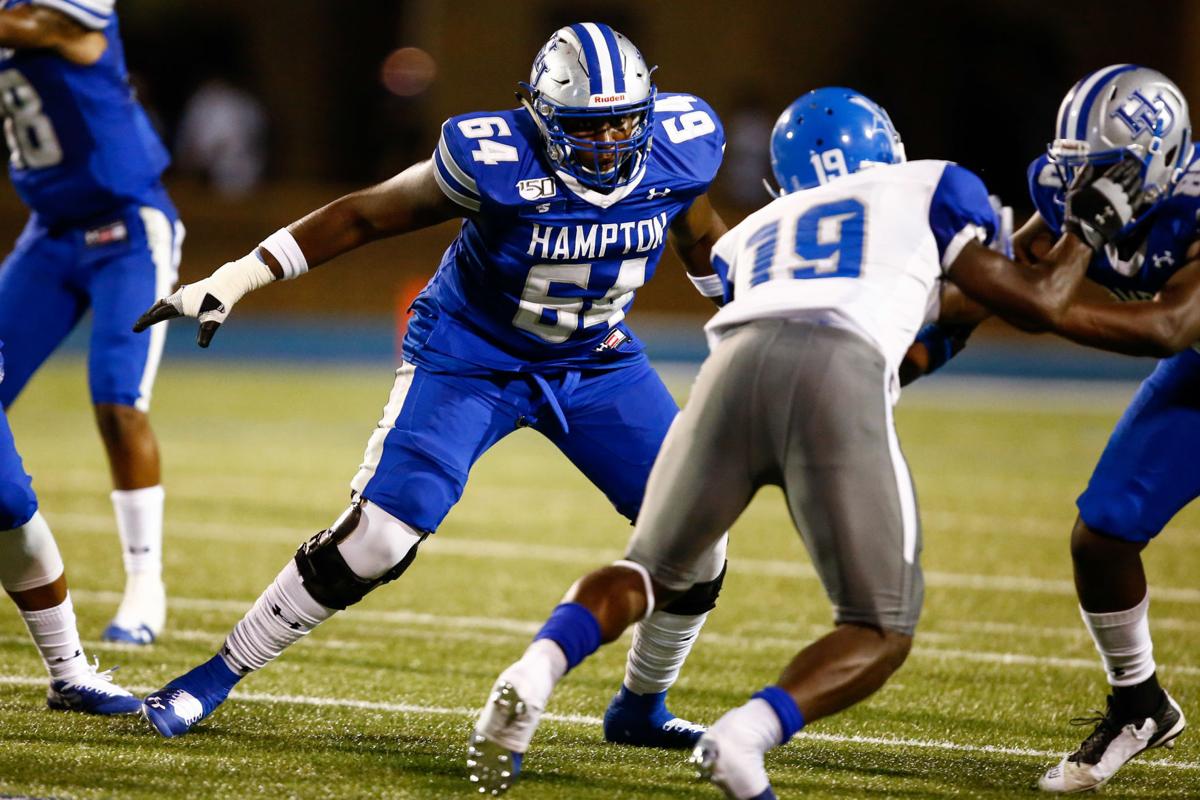 HAMPTON, Va. — It was a difficult start for the Elizabeth City State football team in its season opener against Hampton Saturday night.

Less than six minutes into action, the Vikings trailed the Pirates 20-0.

Hampton, a Football Championship Subdivision program, controlled the majority of the game as the Pirates defeated ECSU 65-7 at Armstrong Stadium.

Saturday’s contest was the first meeting between the teams since 1995, when Hampton and ECSU were both members of the Central Intercollegiate Athletic Association.

Hampton, a now member of the Division I Big South Conference, received the opening kickoff and wasted little time as the Hampton running game set up a Deondre Francois touchdown run to give the Pirates a 6-0 lead.

The Vikings tried to create some momentum on their first possession of the game.

On first down, ECSU attempted a reverse wide receiver pass by Jaquarious Bellamy, but the ball was under thrown and intercepted by Hampton’s Christian Angulo.

A few plays later, Francois would find wide receiver Jadakis Bonds from Riverside High School in Williamston for a touchdown to increase the Pirates’ lead 13-0.

The unfortunate string of plays continued for the Vikings.

On a scramble play by Francois, ECSU cornerback Greg Williams made contact with Francois' upper body while the quarterback went into a slide.

Williams was called for a personal foul targeting penalty.

After the play was reviewed by off-field officials with a video replay system, the penalty stood as called on the field and Williams was ejected from the game.

Video replay is available at the NCAA Division I level.

The Vikings were able to limit the damage as ECSU’s Ahmauree Hastings made a tackle on fourth down short of the line to gain to force a turnover on downs with 2:27 to go in the first.

With the Vikings backed up inside their own 10-yard line, ECSU starting quarterback De’Abrie Smith broke a 49-yard run inside Hampton territory.

The Vikings could not covert on the drive as on fourth down, Smith was flushed out of the pocket and was forced to throw the ball away for a turnover on downs.

Smith was under pressure for most of the game when he went back to pass.

He finished completing 2-of-10 passes for 11 yards.

Smith led the Vikings with 25 rushing yards, but was sacked three times.

Francois would connected with Bonds again in the right back corner of the end zone to increase the Pirates’ lead to 30-0 with 9:25 in the second quarter.

The rough first half for the ECSU offensive line continued as Smith was sacked while scrambling and lost the ball.

Hampton’s Andy Matthew’s Jr. recovered the fumble for a score to increase the Pirates’ lead to 37-0.

The Vikings were held to 48 yards of total offense with 43 yards coming on the ground in the first half.

Francois, a transfer from Florida State, finished the game with 91 passing yards with two touchdowns on 9-of-17 passing.

He played in one series in the third which included an incomplete pass.

Bonds led the Pirates (1-0) with 32 receiving yards and two scores at the half.

ECSU gave up 336 rushing yards and six touchdowns on the ground.

Zion Riddick, from Hertford County, ended the Pirates shutout bid on a 95-yard kickoff return for a TD with 5:30 to go in the third quarter.

"When you play a game like that and you get beat like that, you have ask yourself some questions that make you come to the realization of what you are," Jones said.

The coach said that he told his players to ask themselves two questions:

The coach said that he wanted his team to be honest with themselves.

"If we can be honest with ourselves, we'll grow from this," Jones said.

If not, Jones added that the team will make the same mistakes over and over again going forward.

"There were some good things out there," Jones said. "We had some good play, but it wasn't enough. Our mistakes were big and it ended up costing us, particularly up front."

The coach noted that some of the mistakes that were occurring during preseason camp also occurred during the game.

Jones said that he will grow from Saturday's game, but hopes his team will also grow from the contest.

"We can't make this be our defining moment," Jones said. "Good or bad, we've got to learn from it so we can grow from it. If we can continue to grow every week, we'll get better."

The Vikings are scheduled to return to action this Saturday at Roebuck Stadium against Allen University (S.C.).

Dallas Hall and J'Cori Shaw earned playing time for Hampton in the second half.

Hall and Shaw played their high school football at Northeastern High School in 2017.

Before suiting up for the Eagles in 2017, Hall played three seasons at Perquimans County High School.

Hall, a redshirt-freshman, relieved Bradley at quarterback and rushed for 19 yards on four carries.