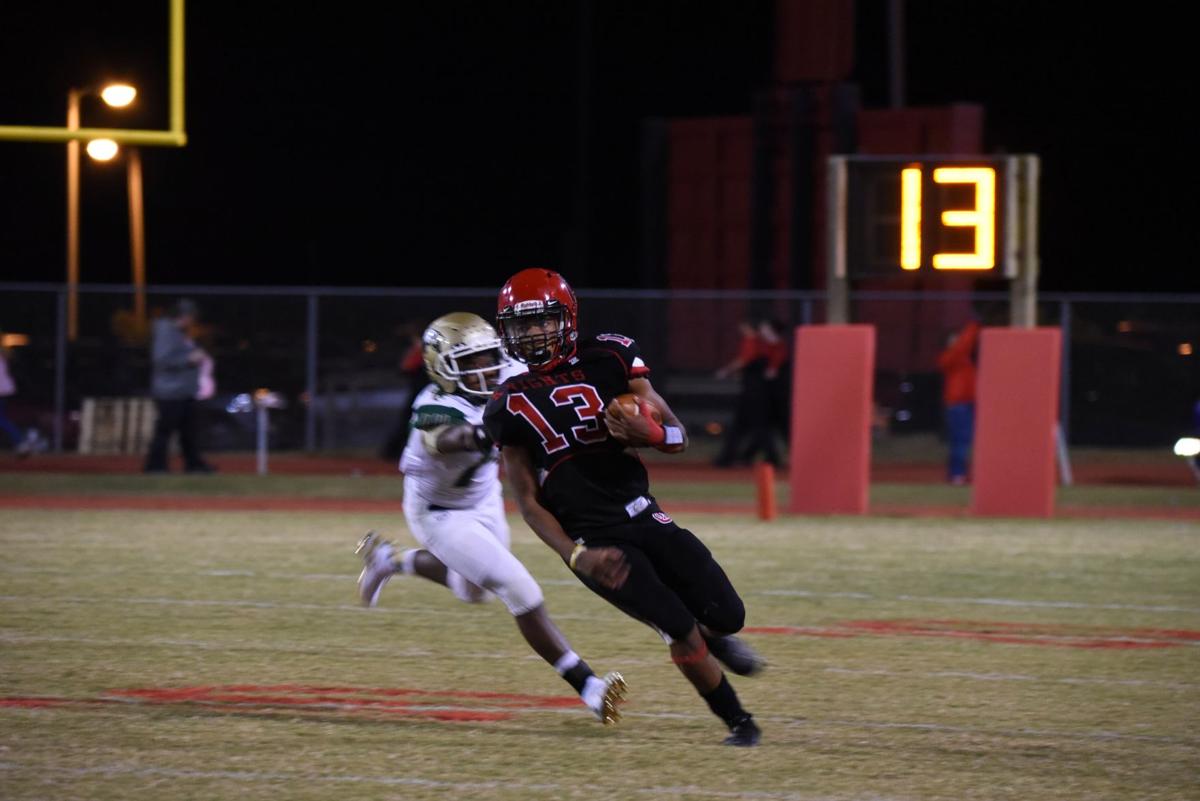 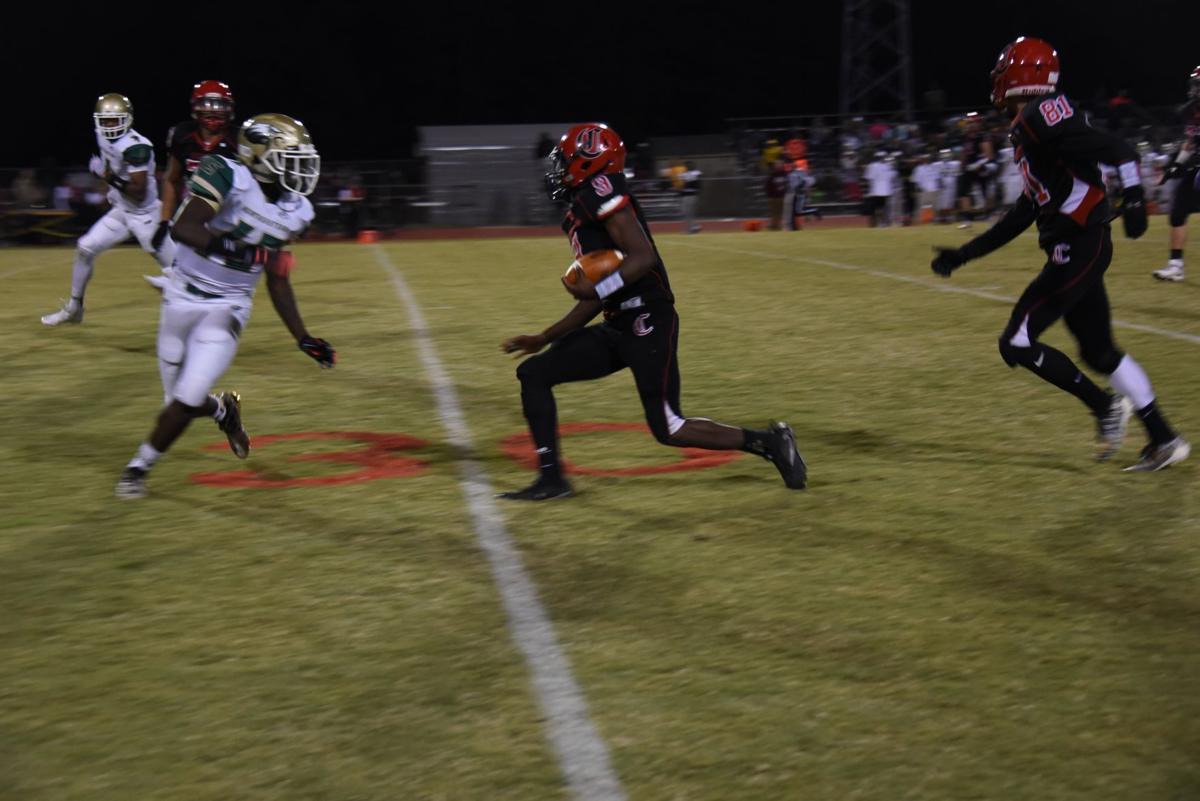 Currituck's Jayden Calloway (with ball) attempts to give the ball to running back Traveon Powell as Northeastern's Adrian Spellman (2) defends during the football game against Northeastern, Friday at Currituck County High School. 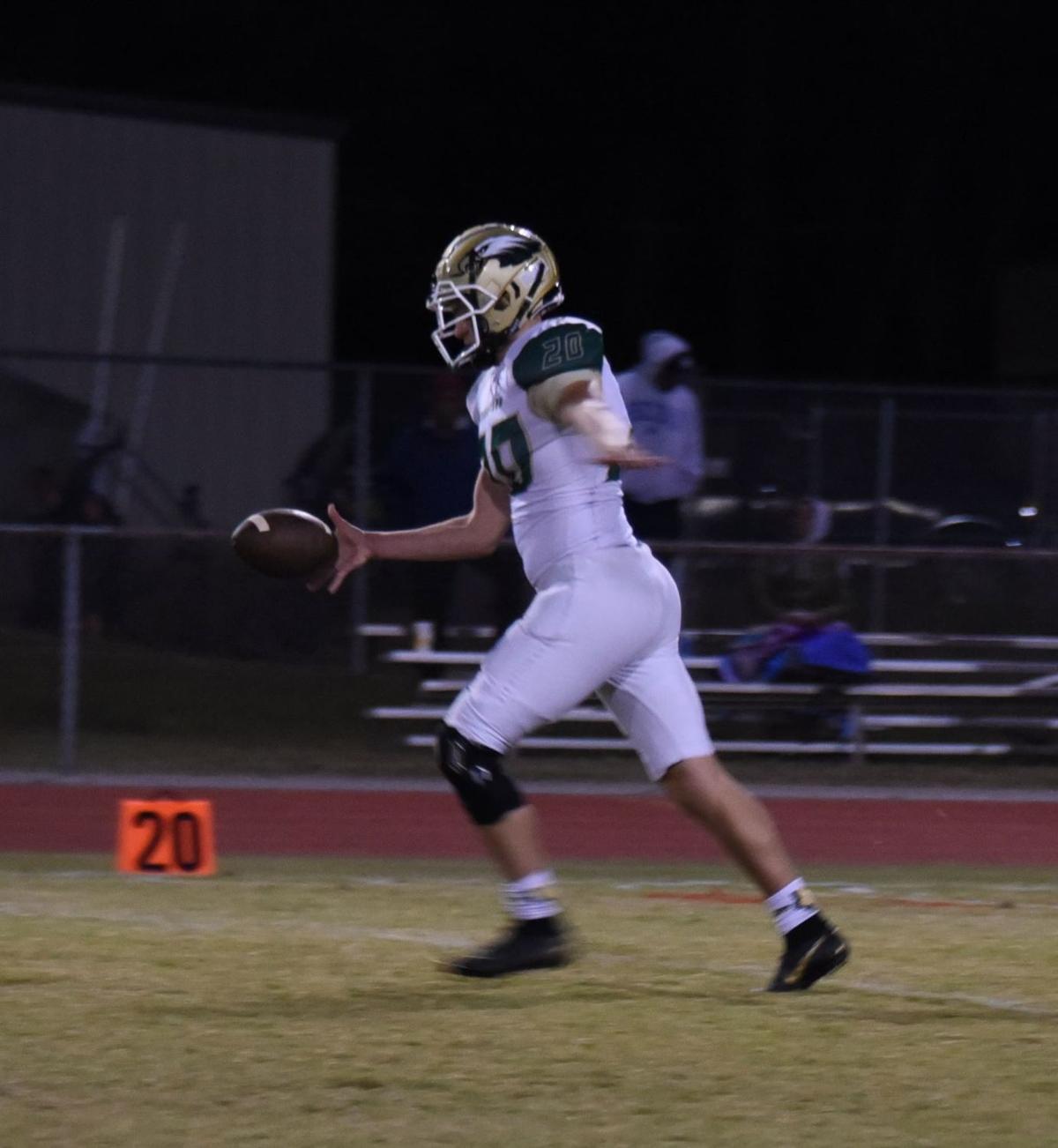 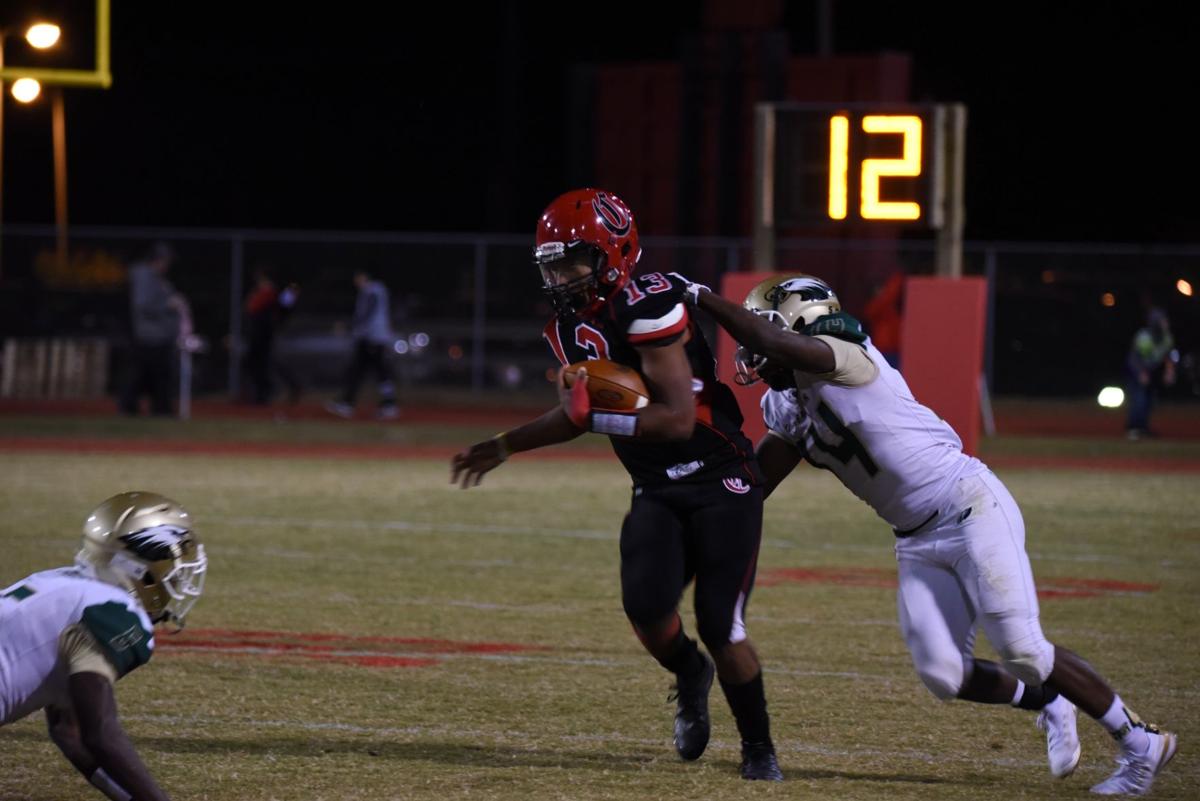 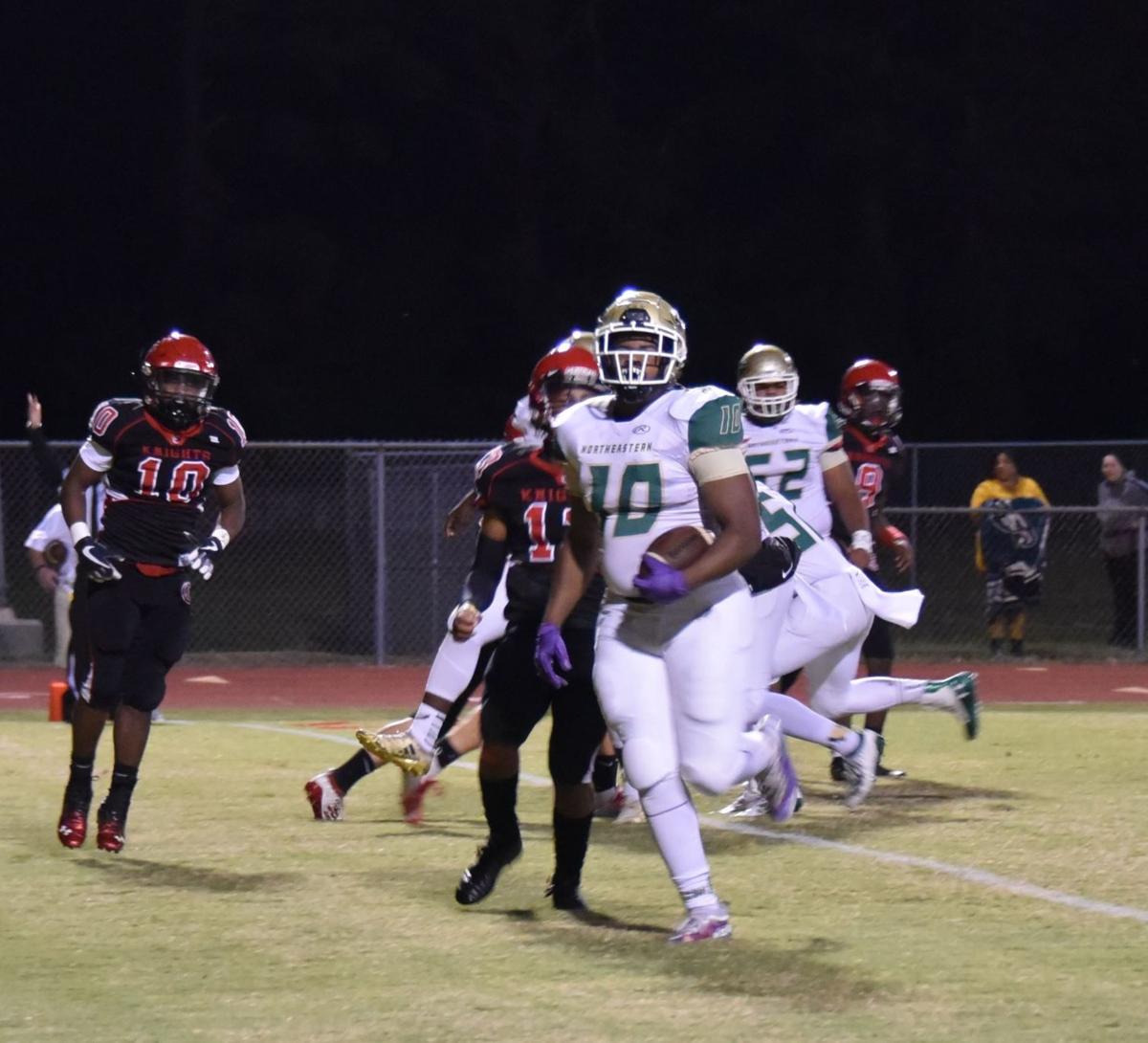 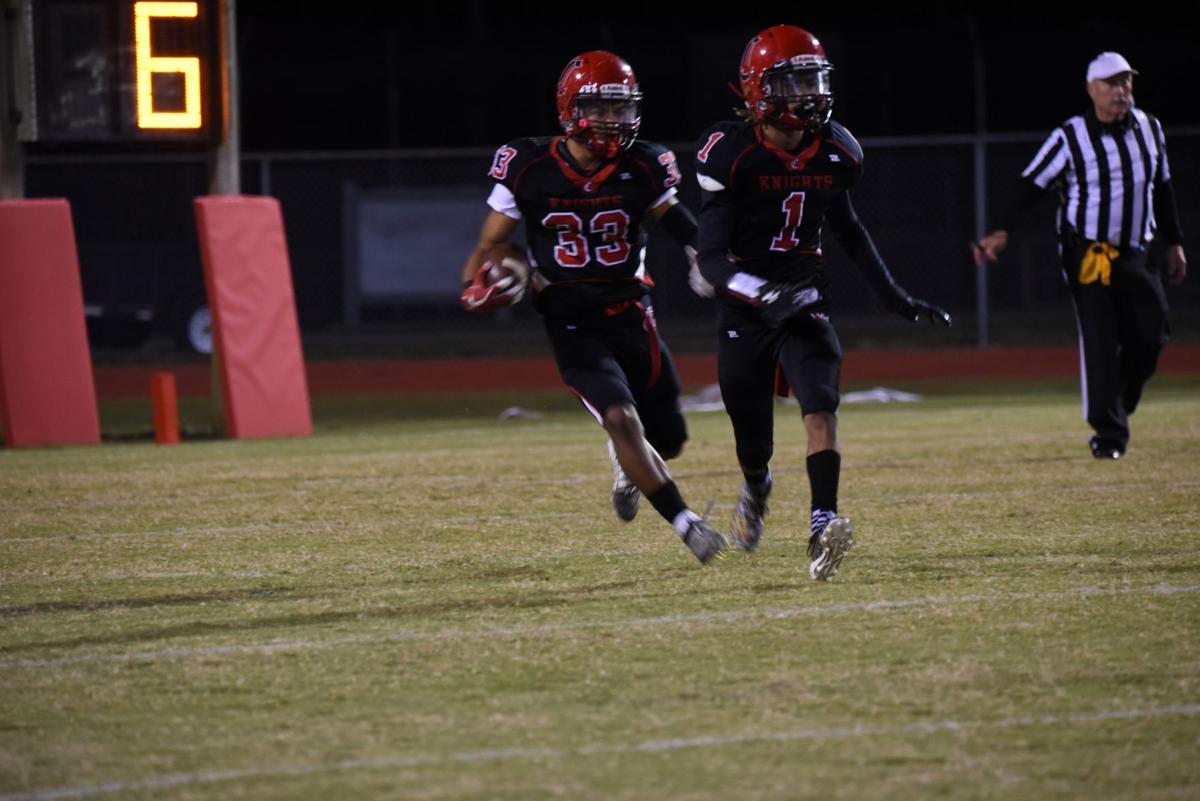 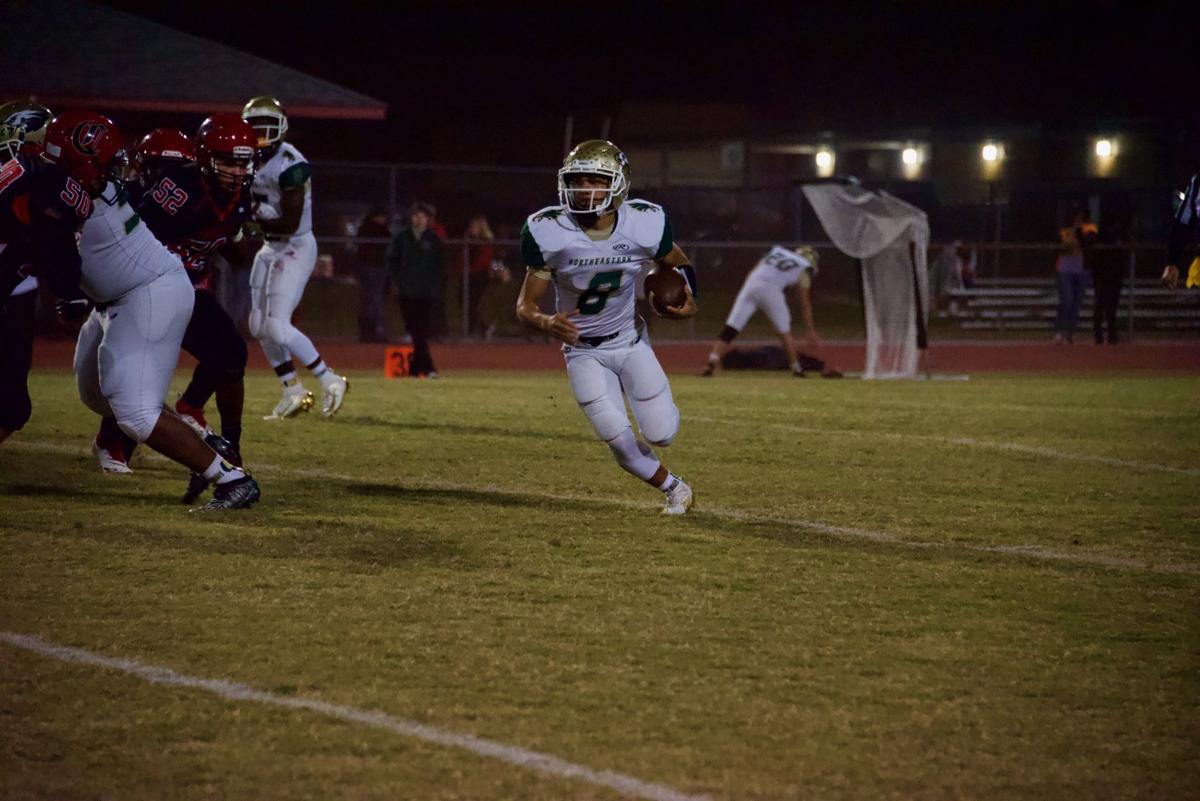 Currituck's Jayden Calloway (with ball) attempts to give the ball to running back Traveon Powell as Northeastern's Adrian Spellman (2) defends during the football game against Northeastern, Friday at Currituck County High School.

BARCO — In a conference game where both Northeastern’s and Currituck’s defenses excelled, Friday night’s game-changing play came by way of the road team.

With the score tied and just under seven minutes to go in the fourth quarter, the Currituck offense started a drive at its own six-yard line after Eagles punter Caleb Brickhouse pinned the Knights deep with a 50-yard punt.

Currituck quarterback Jayden Calloway ran a keeper to the left on the first play, but Northeastern’s Kaveon Freshwater and Adrian Spellman helped forced the ball loose and Amir Payton-Kimble picked it up as he ran to the end zone.

It held up as the game-winning score as Northeastern broke a three-game losing streak with a 14-7 win over the Knights.

“We’re just glad to get out of this game with a win and get back on the winning track,” Northeastern head coach Antonio Moore said.

The Eagles (5-3, 1-1 Northeastern Coastal Conference) rode the momentum of the defensive touchdown on the next Currituck (5-3, 1-1 NCC) possession.

Spellman earned a sack, Currituck running back Traveon Powell was swallowed up by the NHS defensive line on second down and Freshwater took Calloway down in the backfield for fourth-and-26.

Currituck had another drive to try to tie the game, but Northeastern senior Wade Staten recovered another Calloway fumble with 38 seconds to go to end the game.

Friday night’s conference game did not give the impression of a low-scoring game at first.

The Knights began the game with a pooch kick that initially seemed to work in the best way possible when senior Trent Walker caught it 20 yards down the field, but the officials ruled that Northeastern had a fair catch interfered with.

So, instead, the Eagles gained great field position at their own 46 to start the game and took advantage of it.

Led by senior Holden Hodge, who typically is one of NHS’ top skill players but played quarterback for the first time at the varsity level in place of an injured Deandre Proctor, Northeastern marched down the field for an opening touchdown.

Hodge ran 38 yards for the biggest play of the drive before junior Quasi Thomas ran four yards for a score four plays later.

Hodge completed two of five passes for 39 yards and had 12 carries for about 90 rushing yards in his debut behind center.

“He managed the game and did the best he could do, but he’s going to get better each week,” Moore said.

Currituck, however, responded to the early touchdown immediately as Calloway kept the ball himself on the Knights’ first offensive play and sprinted 72 yards to the end zone to even the game 7-7 with 8:45 left in the first quarter.

That was it for points scored by either offense for the rest of the night, but the Knights especially had their chances to take the lead before halftime.

After the defense stuffed Northeastern junior Juan Riddick on a fourth-and-2 play at the Currituck 28, the Knights moved the ball all the way down the field to the four-yard line with impressive runs from both Calloway and Powell.

On third down, Northeastern’s Thomas pounced on Calloway for a short loss and Cole Cardenas, who has been kicking in place of an injured Egan Mansfield according to Bossi, kicked a field goal attempt wide left.

Currituck’s next possession started in great field position at the NHS 25 after a botched snap on an intended punt, but Freshwater, a junior, recovered a Calloway fumble on the first play of the drive.

The Knights then managed a 74-yard drive in the final 6:31 of the first half, but a 35-yard field goal attempt was short. In the middle of the drive, a holding call erased a 63-yard Calloway touchdown run.

“We missed too many opportunities,” Bossi said.

Currituck’s defense kept the team in the game though as the three first half Northeastern possessions following its touchdown ended on fourth down plays.

NHS’ best chance to score in the second half came on a 35-yard run to the end zone from junior Jerron Hinton, but that was called back by a holding penalty and the Eagles eventually faced third-and-37 after a sack and two other penalties.

Even before the scoop-and-score touchdown that helped the Eagles win the game, the Northeastern defense stepped up in the second half.

They forced a fourth down on the Knights’ opening second half drive and after Calloway faked the punt and ran for a first down, Currituck’s Powell was stopped for no gain and Calloway was sacked by a combination of Freshwater and junior Kamarrion Brothers for fourth-and-18.

After the Knights’ next drive went 10 plays for 34 yards, Northeastern forced a punt from midfield.

Currituck’s next offensive play was Northeastern’s Payton-Kimble’s fumble recovery for a touchdown.

“When our offense is struggling with us trying to get some continuity at quarterback and getting better each week, defense has to step up and help us out a little bit,” Moore said. “They did in the second half.”