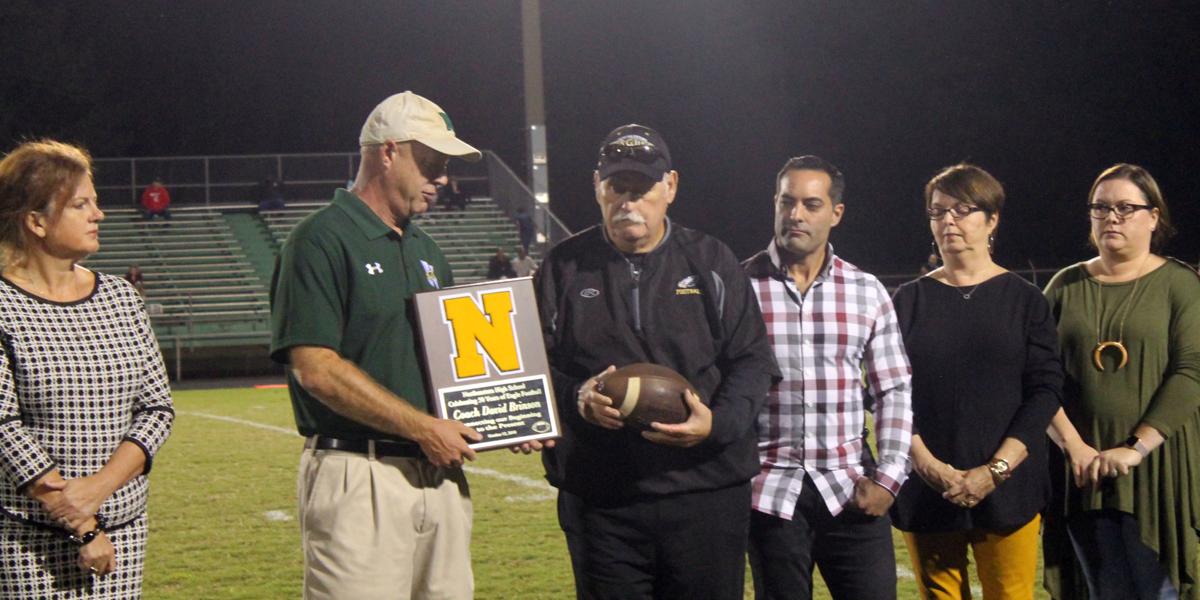 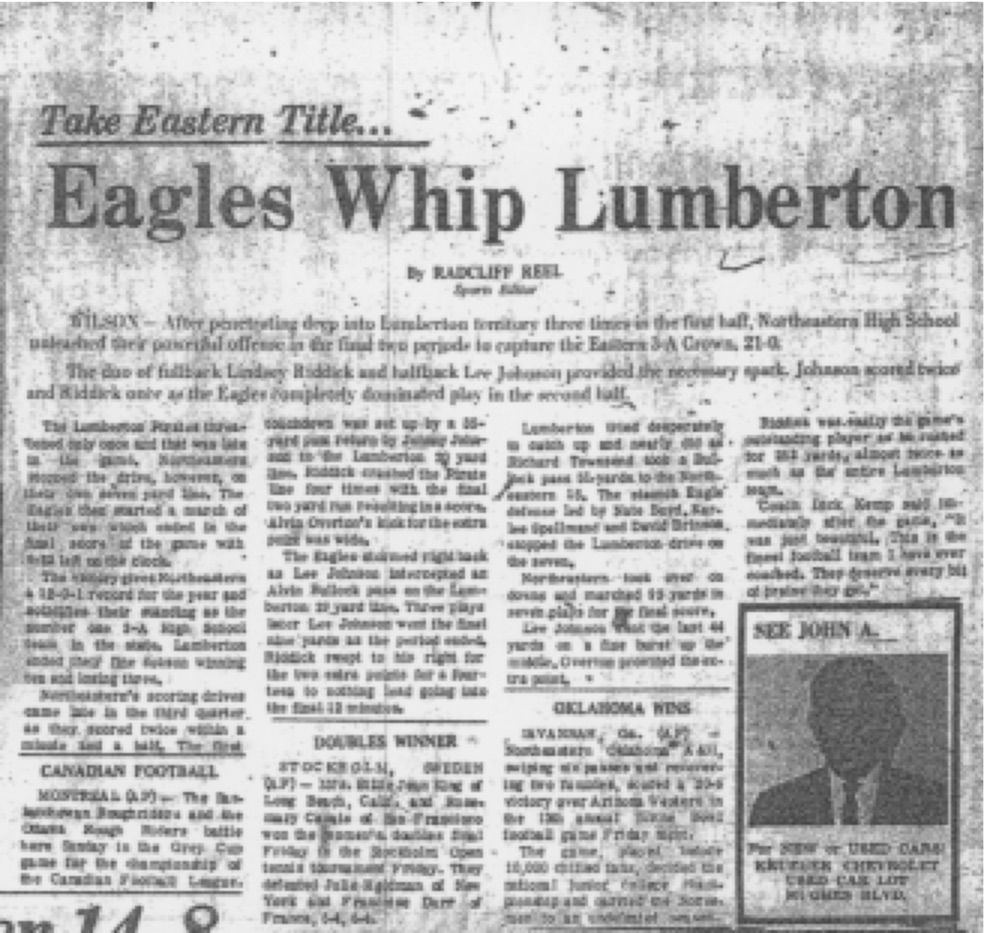 A copy of the Sunday, November 30, 1969 edition of The Daily Advance shows the sports article of the Northeastern High School football team defeating Lumberton 21-0 in the NCHSAA 3-A East Regional championship game on Saturday, November 29, 1969.

A copy of the Sunday, November 30, 1969 edition of The Daily Advance shows the sports article of the Northeastern High School football team defeating Lumberton 21-0 in the NCHSAA 3-A East Regional championship game on Saturday, November 29, 1969.

The most recent was 2010, but the first East Regional championship occurred in the school’s first season fielding a team.

At the time, state championship games between the East and West Regional champions were not held.

David Brinson, who was a member of the 1969 team, was honored before Northeastern’s homecoming game against Currituck County High School Friday night.

Brinson is currently an assistant coach on the Northeastern football team.

Before the start of the second half, Reuben Godfrey was one of a handful of former players from the ‘69 team that were recognized.

Brinson and Godfrey are links to the historic 1969 team that at the time was formed during a time of change.

Not only was the school system in Elizabeth City in transition, but so was the nation.

At the time, public school systems across the nation were made to desegregate.

The three schools consolidated to form Northeastern High School in 1969.

According to Godfrey, who played at P.W. Moore the previous season, there was some initial unknowns for the 1969 Eagles in terms of how players from three different schools would mesh together.

“We just didn’t know, but the team did well,” Godfrey told The Daily Advance Friday night. “We bonded as brothers. It was evident by the way that the team came together that the school came together. I feel like we spear-headed the movement in having everybody on the same page when we started school.”

Brinson told The Daily Advance on Oct. 3 that the unity of the team stood out to him.

He added that the the team coming together was natural.

“All three schools had been doing the same thing, we’ve been playing football,” Brinson said. “We were young kids and we got along real well together.”

Brinson noted that between the three consolidated schools, there were around 10 all-conference performers from the previous season.

“We were lucky that we had a lot of talent,” he said.

Some of those key players were Lindsey Riddick, Johnny Johnson and Lee Johnson, with Chris Jones, Robert McDaniels and Tony Dickerson among others.

Riddick, a fullback, was the standout offensive player for NHS as he was named to the Shrine Bowl in 1969.

Godfrey, who was a senior at NHS in 1969, noted that the team was talented from the first team down to the second and third-team reserves.

“It was the best team in the east,” Godfrey said.

The league was for black high schools in the state.

Elizabeth City High School and Central both had successful 1968 campaigns.

Godfrey, who was a reserve defensive back and wide receiver, noted that he realized that Northeastern was special when the club was beating teams with ease early in the season.

“The third team was playing much of the second half,” he said. “We knew that we had something special.”

Brinson, who played at ECHS his junior year, noted that when Northeastern began the season at practice at Central High School, there were around 100 kids out for football practice.

Both acknowledged that Friday night football in Elizabeth City was electric.

Godfrey added that there were parades in downtown Elizabeth City on Friday for football.

“There was nothing else but high school football,” he said. “Elizabeth City was a football town and always has been. Northeastern is evident of that. The talent is still here.”

When ECHS was on the road, P.W. Moore would have its home games at Memorial Field.

Brinson remembered the prep rallies on Thursday nights while at ECHS.

Brinson noted that the field wasn’t the greatest surface.

“It was where we played,” he said. “It was enjoyable.”

The game that most felt would be the Eagles’ toughest during the regular season was a matchup against Washington High School in mid-October.

Both team entered the matchup undefeated in the then Northeastern Conference, but it was NHS that secured the 21-7 win at Memorial Field.

Brinson noted that as a defensive tackle, he received plenty of double teams from the Washington offensive line.

Riddick had a standout rushing performance with three touchdowns and 247 rushing yards to set a then program record.

The Eagles claimed the conference title by defeating Tarboro 26-0 a few weeks later.

In the Eagles’ final regular-season game of the year against Asheville, the team earned a 12-12 tie.

Entering the game, NHS was one of the top ranked teams in the state in 3-A and 9-0 at the time.

“We didn’t know Asheville and Asheville didn’t know us,” Brinson said. “We played flat and it was raining. They caught us flat. We were looking forward to the playoffs. It was probably good for us to bring us down a notch.”

Northeastern’s final home game of the 1969 campaign was a first-round playoff game against Northern Durham.

The game was a rematch from earlier in the season.

Northeastern defeated Northern Durham for its first win as a program.

“When they came back, we were pretty sure we could beat them,” Brinson said.

The Eagles secured the win to advance. The following week, NHS defeated Pine Forest in the next round in New Bern.

The championship game was held in Wilson at Fike High School.

If there were any nerves, NHS learned how to deal with them early in the season in a game against Edenton.

Brinson noted before the contest with the Aces, some players from P.W. Moore were loose.

“They were dancing. They were beating on the shower stalls and the trash cans and they had their rhythm,” he said.

Brinson said that the coach Richard “Dick” Kemp came in and asked what the players were doing.

“He fussed everybody and he went out,” Brinson said.

Brinson added that Johnny Johnson, who was a team co-captain went out and Johnson told coach that sitting around isn’t what they do and they had to move.

“By the time we got to the championship game, everybody was doing it together,” Brinson said.

Kemp was the coach at Central before taking over Northeastern.

“He was very young at the time,” Brinson said. “He was more demanding of a coach than I had in the past because he was young. He would get on you.”

“They made a lot of men out of young boys,” Godfrey added about Kemp and Paul Winslow.

Winslow was the coach at P.W. Moore and served as an assistant under Kemp at NHS in 1969.

Lumberton and Northeastern went late into the third quarter in a scoreless contest.

“We shut them down pretty well,” Brinson said. “We were pretty confident that we would get it going eventually and score.”

Lee Johnson scored twice and Riddick added a score for the needed points for NHS.

Godfrey was unavailable to play in the championship game because of an injury.

“There was a lot of people from Elizabeth City at the game,” Godfrey said.

Brinson noted that he remembers being with his teammates with the trophy after the game.

Over the years the team has had reunions.

Godfrey went on to Elizabeth City State University where he didn’t play football was was a wrestler.

He forged a career in teaching and coaching in Currituck County Schools.

Godfrey began at working at Currituck in 1974 and retired from the district in 2006.

Brinson went on to earn a degree from East Carolina University in health and physical education.

He said he received a partial football scholarship from ECU, but did not play.

Years after his glory days on the gridiron, Northeastern remains part of Brinson’s life.

“I met my wife in the lecture room here,” Brinson said. “She was a cheerleader from Central High School.”

Brinson has been an educator at Northeastern for more than 30 years and also spent six years as the football coach at Pasquotank County High School.

“It’s our community,” he said. “To be able to work for our kids and by now, be able to work with those kids parents... it certainly gives me something to do that I feel is worthwhile. Although I can’t run, jump and yell like I used to, I can still pass along some things to them.”