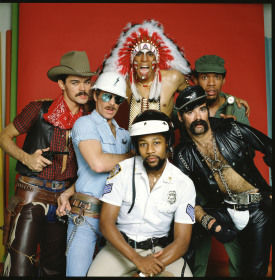 Portrait of the original members of the American disco group The Village People, from left to right: Randy Jones (the cowboy); David Hodo (the construction worker); Felipe Rose (the American Indian); Victor Willis (the cop); Glenn Hughes (the leatherman) and Alexander Briley (the G.I.). 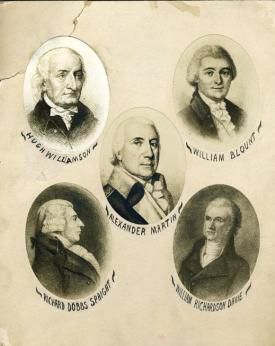 A composite of North Carolina’s delegates to the Constitutional Convention.

Portrait of the original members of the American disco group The Village People, from left to right: Randy Jones (the cowboy); David Hodo (the construction worker); Felipe Rose (the American Indian); Victor Willis (the cop); Glenn Hughes (the leatherman) and Alexander Briley (the G.I.).

A composite of North Carolina’s delegates to the Constitutional Convention.

On September 10, 1976, the facilities now known as the North Carolina Aquariums opened to the public for the first time. Their mission was to promote the awareness, understanding, appreciation and conservation of the diverse natural and cultural resources of North Carolina’s ocean, estuaries, rivers, streams and other aquatic environments.

Known as the North Carolina Marine Resources Centers until 1986, the aquariums were originally intended more as research facilities than as destinations for visitors.

A $53 million construction program in the early 1990s dramatically expanded the footprint of each facility and offered more opportunities for visitors to interact with nature. Jennette’s Pier became part of the state aquarium system in 2011.

Each aquarium and Jennette’s Pier highlights the unique aquatic environments that can be found in the region in which it is located and in different locations across the state. Together they welcome more that 1 million visitors annually and are rated among the best places to visit across the state.

Helping to conserve North Carolina’s unique coastal environment and conducting cutting-edge research continue to be central to the aquariums’ mission.

Moses Hopkins, From Slavery to Liberia via Franklinton

On September 11, 1885, Moses A. Hopkins was appointed Minister to Liberia.

Born into slavery in Virginia in 1846, Hopkins worked as a cook in Union camps during the Civil War. In 1866, at age 20, he learned to read, launching his lifelong interest in education. When he completed his degree in theology in 1877, he was the first African American graduate of Auburn Seminary in New York. Ordained by the Presbyterian Church in 1877, Hopkins moved to Franklinton.

In Franklinton, Hopkins founded Mt. Pleasant Presbyterian Church and Albion Academy. He led Albion through its formative years, and published a newspaper, The Freedmen’s Friend, with his wife, Carrie. The only known issue is from August 1884.

When Hopkins was appointed Minister to Liberia, he reported to Monrovia within a month. He died there in August 1886. His place of burial is unknown.

Bounty Off Cape Hatteras in Shipwreck of the Central America

On September 12, 1857, the S.S. Central America sank 200 miles off Cape Hatteras with great loss of life. The side-wheel steamer was bound for New York from Havana when she encountered a hurricane and sprung a leak.

In addition to about 500 passengers and a crew of 100 aboard, the Central America was carrying mail and more than $1.5 million in gold, including coins minted in San Francisco. Around 145 people aboard the ill-fated ship were rescued by three vessels that were in the vicinity of the wreck at the time of the sinking, but the rest perished.

The great loss of gold was a contributing factor to the Panic of 1857, a short yet severe economic downturn fueled by a loss of confidence in the banking system. The panic was marked by the suspension of gold payments by financial institutions, the failing of businesses, factory closings and a rise in unemployment.

Treasure hunters discovered the wreck of the Central America in 1988, and salvage of the gold began but was halted by a court order in 1991. In April 2014, Odyssey Marine Exploration resumed recovery of the Central America’s lost treasure. To date more than 13,500 coins, bars and ingots have been recovered.

The Central America wreck is well outside the state’s jurisdiction, which extends 3 nautical miles off of the coast. WIthin that 3 mile range, underwater archaeological resources belong to the people of North Carolina and their investigation and recovery are regulated by the North Carolina Department of Natural and Cultural Resources.

On September 13, 1952, singer Randy Jones of the disco group Village People was born in Raleigh.

Jones grew up in Wake County, graduating from Enloe High School in 1970. After attending the North Carolina School of the Arts and UNC, he began to dance and act professionally in New York City.

The concept of the Village People group was the brainchild of record producer Jacques Morali. Jones was cast as the original cowboy in 1977, and remained with the act for three years. The idea of a concept group was not a new one, but the Village People were imbued with such energy, irony and campy enthusiasm that they were wildly successful. In fact, some form of the group has been performing since the Village People scored their U.S. first hit with “Macho Man” in 1978.

Jones, appropriately, lives in Greenwich Village. He continues to perform and act.

The General Textile Strike of 1934: Violence in Burlington

On September 14, 1934, workers arriving for the morning shift at the E. M. Holt Plaid Mill in Burlington were confronted by aggressive strikers who were determined to completely shut down the mill’s operations.

The National Guard soon arrived on scene and, using tear gas and bayonets, dispersed the crowd. Five strikers, including a woman, were injured.

That night, a bomb made of stolen dynamite exploded outside the Holt Mill. The blast caused roughly $100 in damages, mostly in broken windowpanes. A second, unexploded bomb was found by authorities the following day under a loom at the Stevens Manufacturing Company.

Authorities labeled the attack as a communist plot and rounded up and arrested 10 men. Though the violent tactics of the National Guard earlier that morning had galvanized the strikers, support dissolved in the wake of the attempted bombings and the mill reopened four days later.

Although the case against the alleged perpetrators was weak, four of the arrested accepted plea deals and testified against the other six. Author Paul Green led the League for Southern Labor in public support of the men, who were seen by many as scapegoats All six defendants were found guilty after a week-long trial.

Perry grew up helping his tenant farmer family, but his father, who was an athlete and sports fan, gave him time to play sports. Though he played every sport at his high school, Perry was most competitive at baseball.

A right-handed pitcher, Perry drew attention from scouts early and attended Campbell College for two years before turning pro. He signed with the San Francisco Giants and played in their farm system until his League debut in 1962.

Quickly developing a reputation for using the “spitball,” Perry often appeared to doctor the ball by smearing it with various substances (like petroleum jelly). This might have accounted for the sometimes miraculous spin he could produce.

Regardless of the cause, Perry was a pitching phenomenon. He earned the Cy Young Award, baseball’s top honor for pitchers, in both the National and American Leagues, and struck out out 3,534 batters during his more than 20-year career.

Over the course of his career, Perry played for eight major league teams and won 314 games.

Perry became a member of the North Carolina Sports Hall of Fame in 1973, and was honored with membership in Baseball Hall of Fame in 1991. Campbell University’s mascot is named “Gaylord the Camel,” perhaps a nod to Perry.

On September 16, 1999, Hurricane Floyd made landfall at Cape Fear as a very strong category 2 storm. At its peak in the Atlantic, Floyd was among the largest category 4 storms on record. Even as it came ashore it was almost twice the size of a normal hurricane. The 12 to 20 inches of rain that fell as a result of Floyd, which arrived only ten days after another hurricane, caused every river in eastern North Carolina to flood.

Among the towns most devastated by Floyd were Rocky Mount, Tarboro, Kinston and Princeville. The fate of the little town of Princeville, founded by freed slaves, tugged especially hard at the heartstrings of many North Carolinians—most of whom had never been there—as the whole town was underwater for days. A Federal Emergency Management Agency (FEMA) official stated that, although he had worked through more than 100 disasters since 1992, he had never seen flooding as bad as in Princeville.

Interestingly, Williamson and Blount were not among the delegates originally selected. When the legislature met the previous January, it selected then Governor Richard Caswell, William R. Davie, Willie Jones, Alexander Martin and Spaight as delegates. Jones, staunchly anti-Federalist, did not accept the appointment, and Caswell was ill and unable to travel. Williamson and Blount were appointed in their stead. Davie and Martin left the convention early, leaving Williamson, Spaight and Blount remaining as signatories.

Richard Dobbs Spaight, from New Bern, later served as governor, and. Hugh Williamson—sometimes referred to as North Carolina’s Ben Franklin—was a physician, scientist scholar and resident of Chowan County. William Blount, a Bertie County native, was later governor of the territory that is now Tennessee, and U.S. Senator from that state as well.

A plaque in the rotunda of the State Capitol in Raleigh commemorates the three signers.