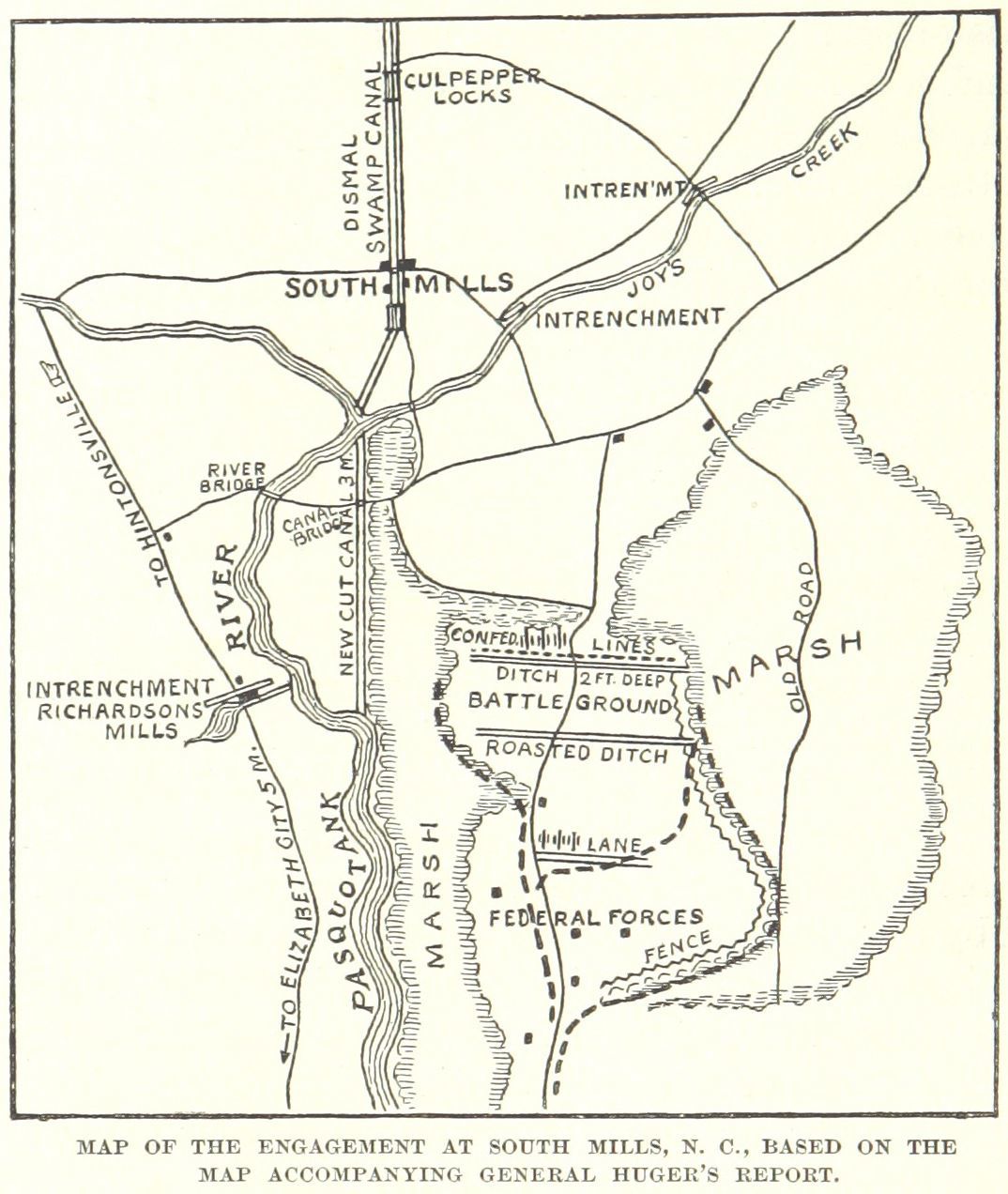 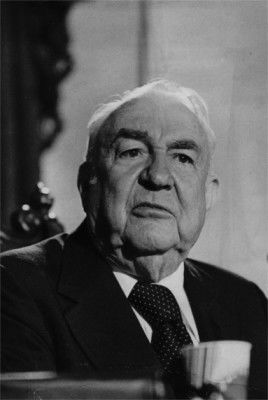 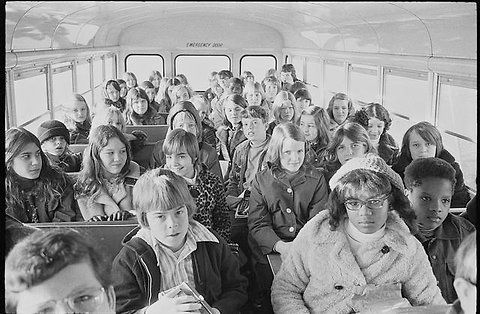 On April 16, 1958, Governor, United States senator and state commissioner of agriculture W. Kerr Scott died. He was born in the Haw River community of Alamance County. Scott remained a farmer and dairyman with close ties to his home and church for all of his life.

After working as an agricultural agent in Alamance County and serving as master of the North Carolina State Grange, Scott fulfilled a promise made to his father by successfully running for state agriculture commissioner in 1936. As commissioner, Scott was a leading proponent of rural electrification and led the successful fight to rid the state of Bangs disease among cattle. He forced manufacturers of feed and fertilizer to eliminate sawdust and sand from their products.

Scott was elected governor in 1948. During his four-year administration, the state paved more roads than had been paved up to 1949. Scott also directed the utilities commission to extend electricity and telephone service to rural areas.

In 1953, Scott left Raleigh to return to his farm at Haw River. The following year he was elected to the U.S. Senate where he served on the Agriculture Committee and helped frame legislation to finance the Interstate Highway System.

On April 17, 1865, Gen. William Sherman met with Gen. Joseph Johnston to discuss terms of surrender for Johnston’s forces. They met at the home of James Bennett near what was then a rail stop, Durham Station. Once alone, Sherman handed Johnston a telegram that bore the news of Abraham Lincoln’s assassination.

Accounts differ on the Confederate general’s reaction. Sherman later said that Johnston broke out in large beads of sweat and expressed hope that the Union officer did not suspect the assassination plot to have been organized by the Confederate government. Johnston later recalled saying to Sherman that Lincoln’s death “was the greatest possible calamity to the South.”

Remarkably, Sherman managed to keep the news in the telegram from his own men. Only the telegraph officer knew of the information, and Sherman swore him to silence. Sherman had just returned from a meeting with Lincoln and General Ulysses S. Grant where the topic was the terms of peace.

With the news, Sherman offered Johnston what he thought was Lincoln’s terms for peace. Those terms, in the wake of the assassination, were deemed too generous and rejected. Sherman and Johnston would meet again on April 26 to complete the surrender process.

On April 18, 1862, Federal forces landed in Camden County to begin a two-day march and fight directed at finding and destroying the locks on the Dismal Swamp canal system. Closing that system would prevent Confederate naval forces from sending ships from a shipyard in Virginia to the Albemarle Sound.

The landing action, now known as the Battle of South Mills, involved about 3,000 Union soldiers commanded by General Jesse L. Reno and 900 Confederates commanded by General Ambrose R. Wright. The battle was part of the Burnside Expedition, which had the wider goal of reclaiming northeastern North Carolina for the Union.

After the federal troops landed and moved toward locks on the canal, one group of men took a wrong road on the advice of their guide. That misstep led to an unplanned 10-mile march, and by the time the stray group reunited with the larger force, they found their fellow soldiers hotly engaged by entrenched Confederates.

The confusion prevented Union troops from reaching the locks, so the federal forces broke off the engagement allowing the Confederate troops to retreat from the scene. Both sides claimed victory—Union forces for retaining the field of battle and the Confederates for preventing the locks’ destruction.

On April 19, 1585, Algonquian Indians Wanchese and Manteo set sail aboard the English vessel The Tyger to return to the Roanoke Island region. The Indians had sailed to England in 1584 with Arthur Barlowe and Thomas Harriot. They caused a sensation when they were presented at the English Court.

While in England they were hosted by Sir Walter Raleigh at the Durham House. There they met with Thomas Harriot and, over the course of several visits, taught him the Algonquian language. Wanchese, unlike Manteo, was not curious to learn English.

Wanchese remained suspicious of English motives and the English in general and eventually thought of himself as a captive rather than a guest. These ill feelings would cause trouble for the colonists once he returned to Roanoke.

The Tyger raided Spanish shipping lines during the voyage to America and forcibly exchanged goods with Spanish traders on Puerto Rico, where the ship waited to reunite with its fleet. From there the vessel continued on to Roanoke, arriving near Ocracoke Inlet in June 1585.

Wanchese slipped away from English control in early July. He urged resistance to the settlers, setting himself at odds with the English and Manteo.

On April 20, 1971, the Supreme Court issued its opinion in the Swann v. Charlotte-Mecklenburg Board of Education case, allowing for school desegregation by busing. In 1965, attorney Julius L. Chambers filed suit on behalf of 10 pairs of African American parents who contended that the Charlotte-Mecklenburg Board of Education’s assignment plan did not sufficiently eliminate the inequalities of the formerly segregated system. The board tried to redo the assignment plan, but the plaintiffs argued decades of discrimination could only be undone through extensive busing. Federal district court judge James B. McMillan agreed.

Disagreements between the board and McMillan on the specifics of the plan landed the case in the Fourth Circuit Court of Appeals, which reaffirmed McMillian’s decision with qualifications. The school board and plaintiffs appealed to the U.S. Supreme Court, which unanimously reaffirmed the ruling in April 1971.

Though initially quite divisive in the community, many Mecklenburg residents eventually began to take pride in their new schools, and some observers have linked the city’s growth and prosperity in the 1980s to the school board’s continued commitment to full integration.

The airport has its roots in Morris Field, which was constructed in 1936 with funds from the Works Progress Administration at the urging of local business leaders. With the U.S. entry into World War II in 1941, the Army Air Corps took control of the field and transformed it into an airbase to support several large military facilities in the Charlotte region.

In May 1946 the Air Corps vacated Morris Field. Charlotte officials then converted the base’s structures into apartment buildings to relieve the postwar housing shortage. The airport is named after Mayor Ben E. Douglas who was instrumental in the completion of the airport project.

On April 22, 1861, the U.S. Arsenal at Fayetteville surrendered to a force of state militia troops roughly a month before North Carolina seceded from the Union.

At the time of the firing on Fort Sumter 10 days earlier, the Fayetteville Arsenal was guarded by a company of the Second U.S. Artillery. On April 22, the U.S. soldiers were confronted with a large force of nearly 1,000 state militia troops reinforced with artillery.

Former Governor Warren Winslow, acting as agent for then Governor John Ellis, negotiated the surrender of the post, which allowed the federal soldiers to leave with their equipment, but forced them to turn over the arsenal’s equipment to the state. By April 27, the Union artillerymen were able to get transportation to Wilmington, and by May 7, the company had arrived at Fort Hamilton in New York City.

During the Civil War, the arsenal manufactured small arms for the Confederacy with machinery shipped there shortly after secession from Harpers Ferry, Va. One of the arsenal’s better-known products was the “Fayetteville Rifle,” a copy of the US 1855 rifle.

Union Major General William T. Sherman captured the arsenal in March 1865, and had the installation destroyed.

Born in Morganton, Ervin graduated from UNC-Chapel Hill in 1917 before serving in France during World War I. After earning a law degree from Harvard University in 1922, he returned to his hometown to practice law and, years later, still described himself as an “old country lawyer.”

A Democrat, Ervin won election to three terms in the General Assembly, was appointed to Congress and served on the North Carolina Supreme Court before beginning a 20-year career in the U.S. Senate in 1954. Considered a strict constitutionalist, Ervin defied ideology or party lines. He sat on the committee that censured Senator Joseph McCarthy in the 1950s, led filibusters against civil rights laws while simultaneously advocating for civil liberties in the 1960s and opposed the Equal Rights Amendment in the 1970s.

His folksy humor, distinctive accent and Southern charm made “Senator Sam” a national figure during the televised Watergate hearings in 1972-73. Ervin retired in 1974 and again returned to his hometown, where he wrote three books and continued to practice law.